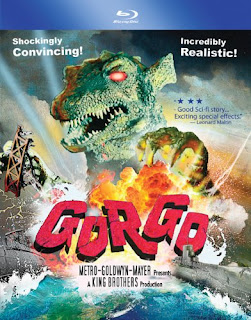 Well, actually it arrived 2 or 3 weeks ago, but I finally got around to diving in this weekend.  I have to say that the disc is worth the purchase--not only is the picture improved over the previous DVD release (especially in the area of color), but there is a plethora of extras that make it worthwhile.
Included are galleries of posters, lobby cards, and stills, as well as pressbooks and even comics.  My only complaint is that they parade by the viewer at their own pace, and I would have preferred being able to flip through, but that's what the pause button is for, I guess.
My favorite extra was the 30-minute documentary, which is a very smart look at the film, and how it fits in in the lineage of giant monster films, historically.  Special focus is given to show how unique GORGO is within this lineage.  There are several recordings of the director in his own words, discussing the production of the film, which made for an extremely enjoyable 30 minutes that went by very quickly!
Now I can get started on my JOHNNY SOKKO set finally!
Posted by Sampoerna Quatrain at 06:50