Items of the Week: ATRAGON Lobby Card and more

Two things I've picked up, and two that I've seen in the wild: 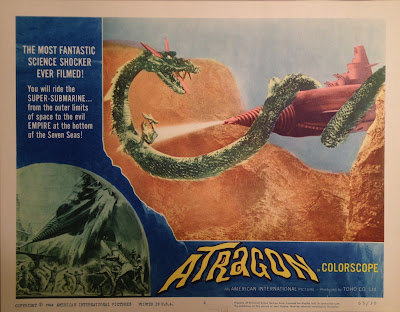 First up, a lovely, crisp ATRAGON American lobby card. Great showcasing of Manda here (with horns and whiskers and all that...did you ever notice they were lost by DESTROY ALL MONSTERS?), even if it is hand-colored, which they did back then.  For some reason..which is why Baragon is green on my FRANKENSTEIN CONQUERS THE WORLD lobby card (see previous post). 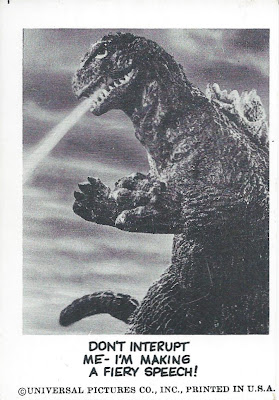 Next up, a vintage trading card from the SPOOK STORIES series 2, made by Leaf.  It's dated 1961, but as we all know, this image is from KING KONG vs. GODZILLA, so they never updated their fine print for the second series. 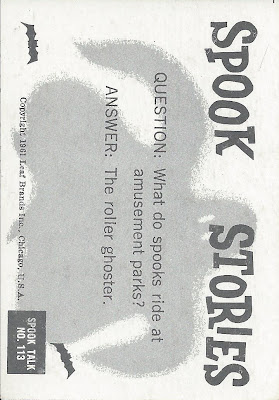 Back side of the card...I am guilty as charged, having just recently made fun of these old cards, with their lame jokes and dodgy captions...but I cannot resist the lure of vintage American trading cards featuring Godzilla! 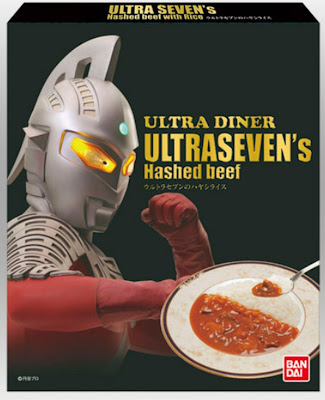 Oh, Japan...do you really have a thing called the ULTRA DINER? Of course you do. Does Bandai produce food products like "Ultraseven's Hashed Beef"? Of course it does. I saw this on Ebay, and it said, in wonky English, that the actor who was Dan Moriboshi either owns a restaurant, and/or works in one...and I thought it was Ultraman Ace who was the chef!
Okay, this is really the FAIL of the week, but I'm not labeling it as such, on a technicality. This was at a local grocery store.  First off, BLEAH to anyone who wants to chew gum flavored as such, but it struck me that the flavor was not only tamarind, but an entire South American country as well...isn't it "Chili Pepper" after all? Unless that was the intention..."enjoy the flavor of tamarind, expertly blended with trees, dirt.....burros...."
So, according to Wikipedia, it's a sort-of alternate spelling to say "Chile" in reference to peppers, so I didn't exactly stamp a FAIL on it....but in defense of language, we have to draw the line somewhere, folks.  It's like the millions of people who continually use the word "disrespect" as a verb.  Continual misuse of the English language may cause a  new entry to be placed in the official dictionary after several years, but it doesn't make it correct.  Or even a good idea.
Posted by Sampoerna Quatrain at 07:27

Funny the things Bandai could shill for a reason.