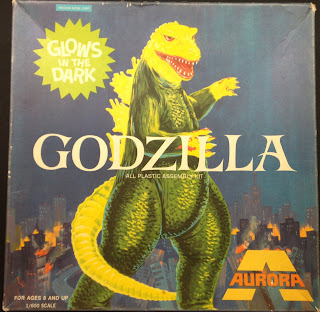 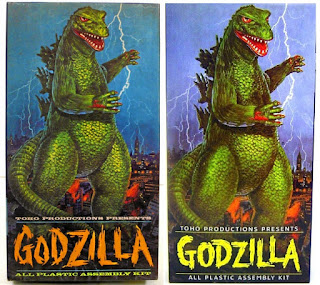 On the left, the original 1964 Aurora model.  On the right, the re-issue by Polar Lights, which was around the year 2000.  It was cool that Polar Lights retained the original artwork, but just in case you are ever looking at an auction, and all you can see is the front (which happens), and, just in case the seller is unscrupulous and trying to pull a fast one (which happens), you can see here that there are differences, particularly in the font, and really clear in the GODZILLA logo.  By the way, a sealed Aurora specimen recently went for $800 on Ebay! [Edit: a few years late, over $1,000!] Of course, unopened vintage models are rare anyway, but even the opened ones are pretty pricey, if you can find one. 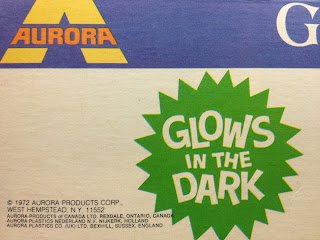 But, it's a great kit either way, and the 1972 edition was a re-release of the 1969 one, which was unique, in that it added the GLOW-IN-THE-DARK parts that Aurora was doing at the time with all of their monsters, such as Dracula, Wolf Man, etc.
It strikes me that Godzilla would look weird with his entire head, hands, feet, partial tail, and dorsal plates glowing in the dark, but I bet it made a cool addition to a kid's bedside table. (Wait, the plates on his back do glow in the movies!) 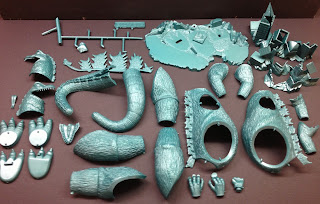 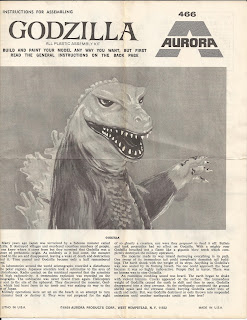 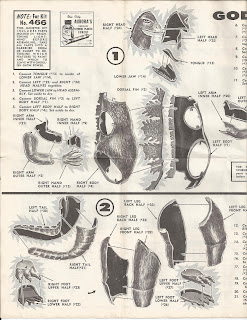 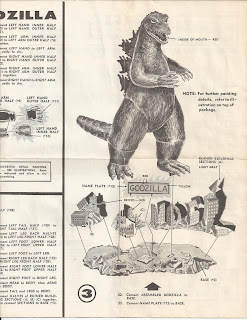 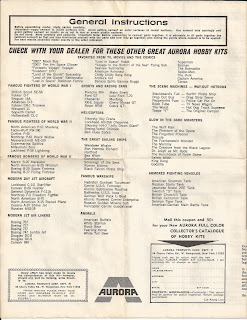 Tomorrow, or very soon thereafter, I have a very special post coming...something that doesn't add up to much, time-wise, but something I am really excited about, because it isn't available anywhere else!
Posted by Sampoerna Quatrain at 07:24

Had a similar kit in the early 70's,
not glow-in-the-dark. Accidentally sat on the thing right after getting my shots for school. My mother threw it away.)

I had this kit too. I remember putting the blood on his hands and teeth. The glow in the dark thing was definitely cool but I would like to know more about how they got it to glow!

I had this. It had a glow in dark head. I had to put it in my desk, so I could sleep.

I had this model too as a kid. Did it up with the glow in the dark features. I kick myself for not grabbing it out of my parents house .