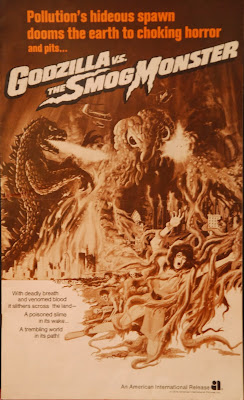 Pressbooks are pretty cool relics of movie history--for the uninitiated, these were slick publications that went to theaters, allowing them access to an arsenal of text, photos, and ads to market a new picture, including the ability to order movie posters, lobby cards, and/or radio spots.  In the 1950's, these were more accurately called "press kits," because they usually came in folders and were letter-sized.  By the 1970's, they had become legal-sized, which makes them nigh impossible to scan on a regular domestic scanner.  Because of this, we are going to hit the high points here for one of my favorite Godzilla movies. 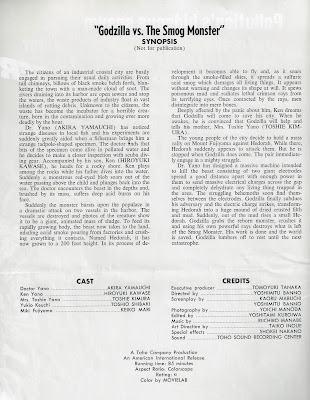 The inside cover of a pressbook often includes a summary of the film, with some cast and credit information.  Notice they tell you that, while they give it to you, it's not for publication. 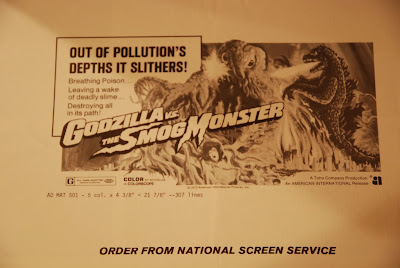 Sample newspaper ad, of which there are many shapes and sizes. 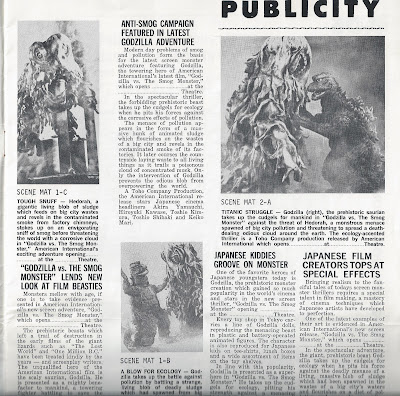 Here are some examples of articles that COULD be used...although some of them are pretty goofy, even though it was 1972.  I'm not sure how many people would be lured to the theater by  "JAPANESE KIDDIES GROOVE ON MONSTER." 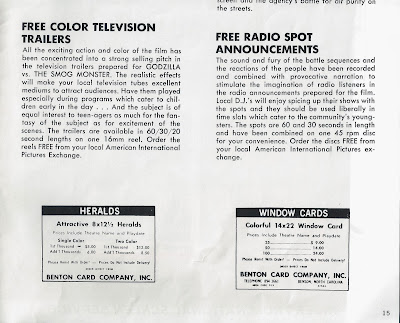 Also, pressbooks are important resources to know exactly what items were produced for a certain film--note that they aren't always accurate, but it can give you an idea of what is out there.  For example, I have yet to find any proof that Ghidrah masks were produced for GHIDRAH THE THREE-HEADED MONSTER...see my post on that pressbook to see what I mean.
This one does tell us, though, that radio spots were issued on a 45 rpm record, and that they ran both 30 and 60 seconds long.  Also, three lengths of TV ads were produced, and last time I checked, these are all on YouTube and are obtainable.  Note also the Window Cards by the Benton Card Company, who somehow had the market cornered on that niche item.  Now we get to the really fun stuff: 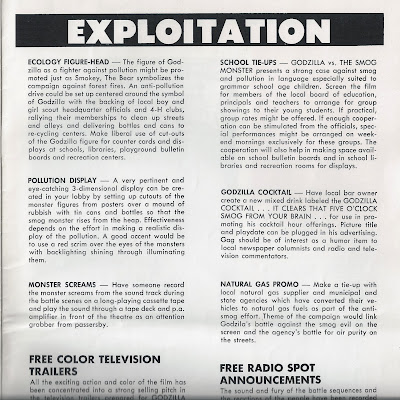 Oh, man...I understand what they were trying to do here, but did any theater ever really DO any of this stuff?  Let's look at these more closely:

1)  First off, Godzilla is suddenly Smokey the Bear, "cleaning up the streets" with boy scouts...while you get your mind around that, let's move on to the next one.
2)  Here we are told that the film speaks "in language specifically suited to grammar school aged [sic] children," and that it should be screened for them in schools.  Um, don't get me wrong here, my own Children have seen this film since they were that size, but let's be realistic here...this Godzilla film is a contender for the most on-screen deaths in the series, aside from the injuries, skeletonized people, and fish-headed freak-outs.  Using a 1972 mindset, would that have even been a good idea? I have a friend with a four-year-old who wets his pants if he sees his own shadow...I somehow think that following this particular advice would have led to therapy all around.  Again, not that it should be this way, (I personally think the film should be a part of any child-rearing) but I suspect this plan would have backfired badly.
3)  Next we have the plan of bringing a "mound of rubbish" into the theater lobby and making sure it is "realistic" to promote the film...I think this one also would probably have not worked out so well, and I can think of several bad, and stinky, outcomes.
4)  Moving on, my favorite on this page is the GODZILLA COCKTAIL.  Yes, we have gone from elementary schools to the barroom here, in a few lines.  "GODZILLA COCKTAIL...IT CLEARS THAT FIVE O'CLOCK SMOG FROM YOUR BRAIN."  "Gag should be of interest," we are told.  Yes, indeed, quite.
5)  Next we are told to break the law, and "have someone record the monster screams from the soundtrack" to play in the lobby over loudspeakers.  I am quite sure that, considering the primitive way this would have been done in 1972, this would have turned out quite annoying.  FAIL again.
6)  Lastly, as if all of this wasn't enough, we are told to "Make a tie-up with local natural gas supplier" which makes absolutely no sense at all...although it may be the most do-able idea on the page, come to think of it!
Posted by Sampoerna Quatrain at 09:13