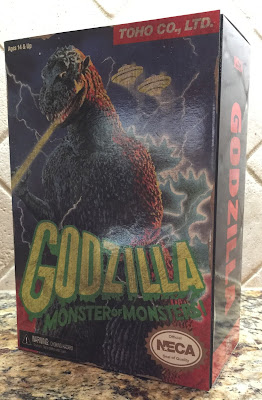 I'll be honest, when this figure was announced, I thought "wha?"...I'd seen NECA's Batman NES figure, which is clogging shelves at TRU.  I understood what they were trying to do, and thought it was neat, but it just didn't grab me.  But, as time passed, I became more excited for the release of this figure, and it's a definite first.  It's new territory for Godzilla figures.  This is the fifth Godzilla in NECA's ongoing series so far, so let's take a more in-depth look at how they did! 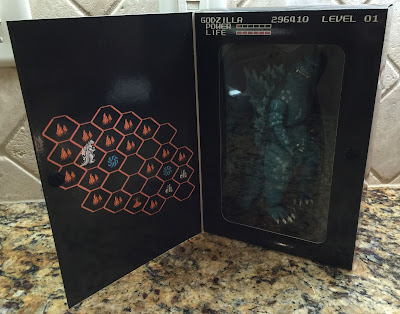 You can't get off the ground without noticing the packaging, which is "11" on a 10 scale.  Like the Batman figure I mentioned, NECA has made sure to replicate the original 1989 NES box art (albeit much thicker, but that's a necessity), which is fantastic.  I like the NECA emblem in place of where the Nintendo Seal was.  The front is held in place by Vel-cro, and when opened, there's a lovely full-sized image of the map from the original game.  Over the window for the figure is information from the top of the screen! Well done!  This is one box you will not throw away. 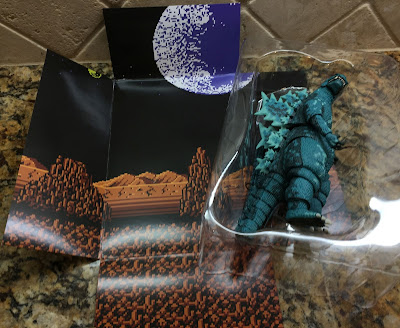 But wait, there's more!  Inside the box is a lovely backdrop, which is a typical background from the game (where Godzilla fights his way through planets containing various monsters under the control of aliens from Planet X...and was actually quite difficult!).  So now, we are way, way off the charts for amazing packaging.  It's just simply superior. 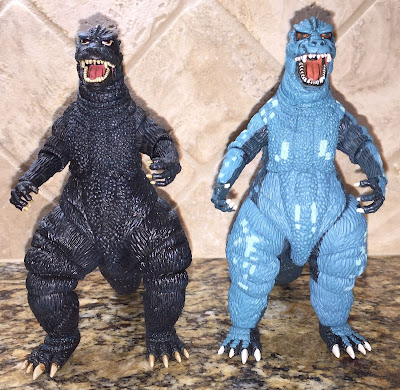 And now to the figure!  Everyone pretty much knew that this was going to be a repaint of the 1985 Godzilla when it was first shown, but it's not a STRAIGHT repaint.  NECA has not phoned it in here.  Although, in reality, there's nothing wrong with using the 1985 design, as it was the newest, current Godzilla when the game came out.
I do like the attempt at simulating pixels with the paint deco.  I don't think the Batman has those, and it's a novel approach.  It was one of those things I didn't appreciate months ago, and now I can't imagine the figure without them.

Right away, the first thing that becomes obvious is that they have made the dorsal plates accurate to the game...which are huge!  In fact, here is a better look at a sprite from the game, from the back of the box: 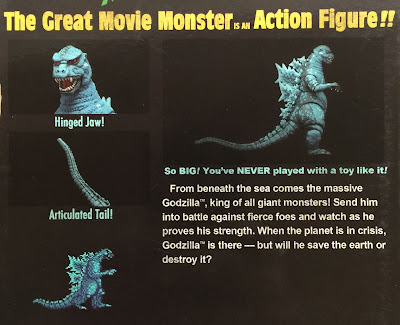 Here are a few more from the game itself:

One more change that was made was to the legs.  The 1985's legs were really bowed (so much so that he can perfectly ride a 6"-scale speeder bike, but that's another story), and while I haven't compared, these are either brand-new legs, the 1994 ones, or something in between.  They didn't have to make this change, or go to the trouble, but it really works in favor of the figure.
His posability is equivalent to the other figures in the line.  The bendy part of the tail comes separated, and is attached by a ball joint. There is apparently a swivel at the knee, but I can't figure it out.  Mine seems stuck on both legs, and I really don't want to force them.  Extra attention was definitely paid to paint, because it would have been easy to get sloppy with the pixel decos, but mine looks sharp and clean.
In short, another great figure, and one of the most unique Godzillas you will have in your collection.  Coming next from NECA is the 1954, which I am very wound up about...hopefully this will mean many more vintage suit designs in our future! 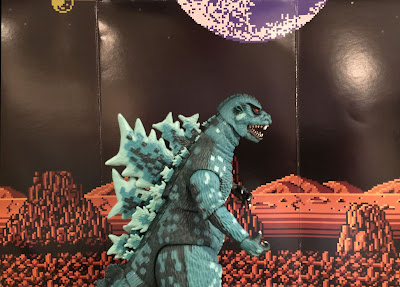 Posted by Sampoerna Quatrain at 07:46