FAIL of the Day: "SUPERHEROES" by BlockTech 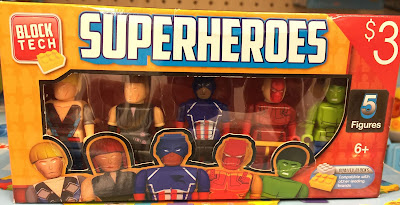 I don't know why I find so many hilarious things in the "cheap section" at the front of Target stores, but I do.  This is funny on so many levels.  I almost spent the three bucks for it, but in the end I lost interest. 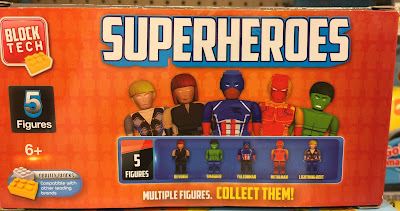 The funniest part of this are the names:  Revenge, Smasher, Falconman, Metal Man, and Lightning Bolt (of course, some of these are actual comic character names, but we won't go into that).  I've mentioned what I call "Grandmother Toys" before, because these are the sorts of items that are made to fool elderly people who need a child's gift, but don't pay any attention.

In the end, though, you have to wonder if there's anyone else this company wants to irritate, since they will be angering both Lego and Disney/Marvel...which between them own most of the world.  Why don't we just make fun of the dictator of North Korea or something, and go for a trifecta? Maybe include some "Bill Cosby is Innocent" stickers? It was nice briefly knowing you, "Block Tech!"

I like the Moe haircuts on Hulk and Thor. Hawkeye's squire cut has an androgynous/metrosexual fashion sense. Captain America and Iron Man sporting the Devo hats are very hipster.

As a child, I fell into the rut of "brand name I everything".Levis,not Rustler.Nike,not Zips,etc. But for some reason,I liked combining brand name toys with generic counterparts.Starroid Warriors were welcome to drink with Greeda Walrman at my Creature Cantina.Metal Man was welcome in my Micronaut Universe.Rom the space Knight battled my Kenner Alien monstrosity(alongside my ancient GI Joe with Kung Fu Grip)anyway you get the idea.If I collected Bearbricks, Minimates and things of this sort,these oddball heroes would definitely be an inexpensive addition to my stash.

Good stuff. Now I wish I'd gotten them. If I see them again, it's going to happen.