Some days, you don't know exactly what you are looking at*.

That was me, earlier this week.  One of my myriad saved Ebay searches yielded the above washed-out photo, which I thought was cool.  The caption stated "Kodachrome Slide, Godzilla Balloon, Osaka, 1950's," which was all the information available.

Right away I noticed a couple of easy things:  first, the red characters on the banner obviously said "Gojira."  Second, there was a giant Toho logo on top of the building at the left, so it must be a theater.  Therefore, I concluded that this was an advertising campaign for GODZILLA RAIDS AGAIN, the 1955 sequel to the original film.  After all, that film has a lot to do with Osaka, so it all just made sense, right?

Nope!  I forwarded the link to Sean Linkenback, author of AN UNAUTHORIZED GUIDE TO GODZILLA COLLECTIBLES (among many others), and good friend to this blog.  He was able to quickly add more information to the investigation.  First, he found another photo of the same theater from the seller's other slides: 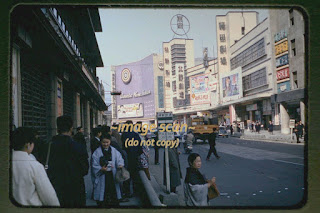 After I did a little contrast correction to it, we can see that the name of the theater is the "Umeda Koma Stadium," and it was quite large (this page says the theater is no longer there, having relocated in 2005).  Secondly, and back to the original slide, Sean immediately suspected that the figure in the lower-right was Audrey Hepburn (more on that in a moment).  Next, he was able to find out what the text on the hanging banner said:  "Great Toho proudly announces the science fiction movie of the century GODZILLA."

Suddenly, we were in completely different territory.

We know that Toho released GOJIRA, nationwide, in November of 1954...so, why Audrey Hepburn? Because of the hit film SABRINA, which a little research showed, was released in Japan in mid-September! What we were looking at was a hitherto-unknown promotion for the original GOJIRA, and one that as far as I can tell, had never been discussed anywhere! Heck, it's entirely possible that the film hadn't even premiered yet, and the balloon and banner were part of building up hype! And there it was, hidden in a cache of old travel slides, no doubt snapped quickly by a traveling American businessman who was taking in the sights of Osaka and photographing whatever caught his eye.

By the time we'd deduced all these things, the auction was gone (actually ended by the seller as "no longer in stock," so the slide's fate is unknown).  It would've been great to own this piece of history, and it would be equally exciting to know whatever became of the Godzilla balloon itself!

One silver lining to the whole thing is that I was able to clean up the image quite a bit, remove the watermark, and adjust the contrast and color, restoring it to what it most likely would have looked like originally.  I can't do anything about the slight blur to the photo, but I improved it quite a bit: 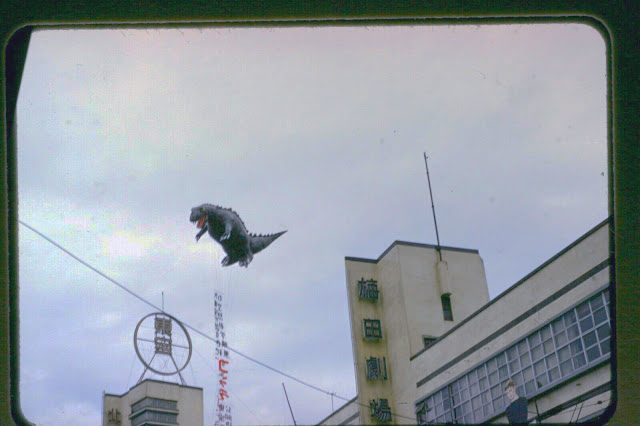 It makes me feel a bit like a UFO researcher, blowing up grainy old photos:

(*Apologies to English teachers of the past.  I ended a sentence with a preposition, there, but it was for dramatic effect, so it's okay.) 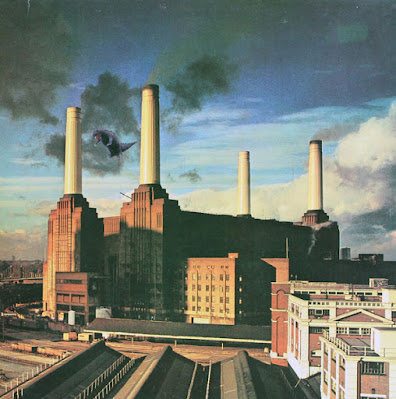 Posted by Sampoerna Quatrain at 09:39

How could you have forgotten about the classic movie "Godzilla vs. Sabrina" or "Godzilla: Wish You Weren't Here" by Pink Floyd?
PS: The balloon looks great, I wonder what is/was its size?