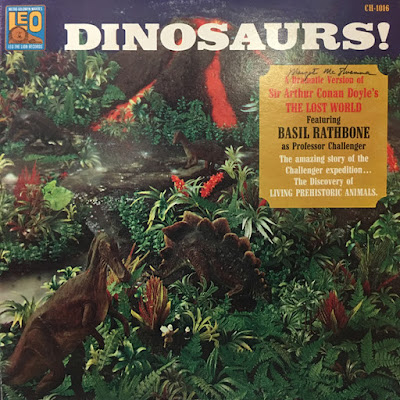 I suppose the actual title of this record is:  "DINOSAURS! A Dramatic Version of Sir Arthur Conan Doyle's THE LOST WORLD Featuring Basil Rathbone....." but where do you stop?

It doesn't matter, because mark my words, my friends, this is great stuff.  This record is so well-made, it would seemingly belittle it to classify it as a children's record.  However, to be fair, it comes from an era where solid entertainment could be made for kids without feeling the need to completely dumb everything down to levels of absurdity. 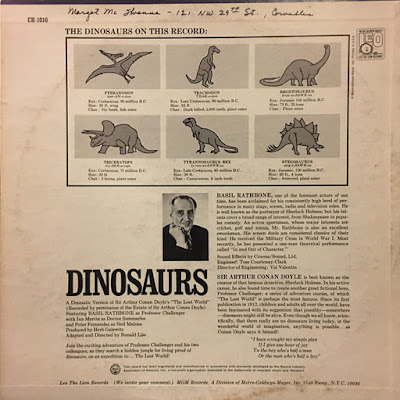 Featuring a delightfully over-the-top performance by the great Basil Rathbone, as well as the also-great Peter Fernandez (whose name should be familiar to you from Speed Racer, let alone the great American dubs of Godzilla/Toho movies done at Titra/Titan studios), this is a top-notch effort that will impress you.  It even stays overwhelmingly faithful to the book, although simplifying the plot (also there is one minor change that surprised me--without spoiling the story, it has to do with the proof that the group brings back from the Lost World) somewhat, which is obviously required when you reduce a novel to a 38-minute audio story.   The script, sound effects, and performances are all enthralling.  Even when brief educational factoids are thrown in about a specific dinosaur, it doesn't hinder the plot (if you can believe that)! I enjoyed it immensely, and I think any kaiju and/or dinosaur fan will too!

LINK:  Dinosaurs! (not the Jim Henson sitcom with the baby)

Posted by Sampoerna Quatrain at 07:04

You're very welcome! I'm glad it's being enjoyed, because I can't say enough good things about this record!

Much appreciate you sharing this

You're so welcome! This has ended up being one of my favorite records that I've ever shared here!