I recently finished a set of Godzilla items I never thought I would live to see complete, and this week, we are going to be taking an in-depth look at it.  It's a great toy line made by the short-lived Trendmasters company, who in the mid-90's began to produce a large amount of Godzilla merchandise.  Some of it was great, and some less-than-stellar, but the best part about it was the attention it brought back to Godzilla, and all without a new film in American theaters.  People suddenly began to realize there were new movies being made in Japan, and the rest is history!

One of my favorite Trendmasters items are the Micro Playsets, similar to Micro Machines, but even cooler.  These playsets were all contained in a large Godzilla head (and later, that of his foes), for goodness' sake! And, just like practically everything that Trendmasters made, a cool trading card is included! Between 1994 and 1995, seven different playsets were produced, with the 1995 ones being rarest--and even in one case, mega-rare--to actually find. 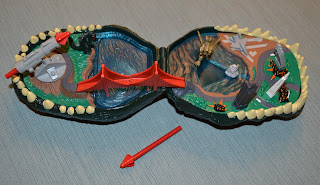 We are going to begin with the first one I ever bought, 1994's "King Ghidorah In San Francisco."  (Another super-cool feature of these playsets were the American cities that Godzilla hadn't ever actually visited--aside from briefly calling on New York in DESTROY ALL MONSTERS!) I was always drawn to Ghidorah, and this playset was a great purchase.  Here is a scan of the backing card: 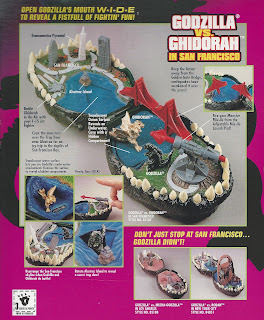 FACTOIDS OF INTEREST:
*Features real-life locations, such as the Golden Gate Bridge, the Transamerica Building, and Alcatraz Island!
*Rotate the former prison, and a trap door opens, swallowing your kaiju in a watery grave!
*The only time this Micro-figure of King Ghidorah was produced!
*Underneath the removable water-top is a "hidden compartment."  What they don't show you on the packaging is a tiny hinged door, built into the sides of the ocean...! What it's actually for, I was never able to figure out!! 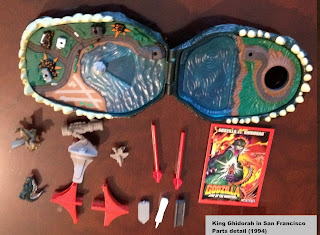 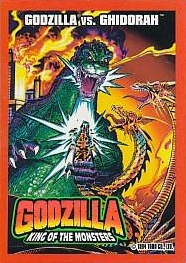