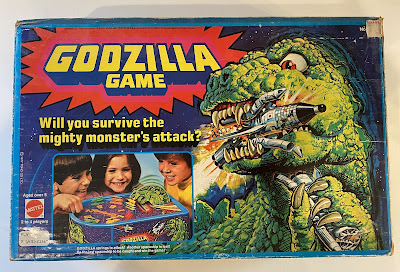 Here is an item that I bet you are likely to know something about, since you are a visitor to this site.  Somehow I have neglected to do an official post on this iconic game, all these years, and it's time to rectify that omission! 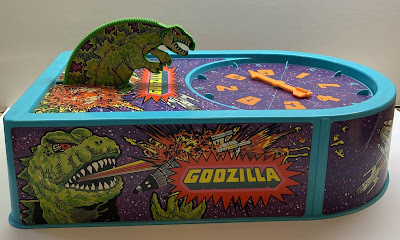 Now, the title says it all; this was the companion landmark item to the Shogun Warriors Godzilla that same year.  Kids either:  had this game, new somebody that did, and/or wanted it desperately.  Before we jump in, rather than use this video as an afterthought, let's lead with the famous (in these parts) TV commercial:

That ad is still so exciting, it makes me want to buy another copy of the game! As we saw in the commercial, players would take turns spinning, and flying some of their 24 colorful spaceships around the galaxy by turning a large wheel.  The suspense builds because, what they don't know is whether Godzilla will strike at any time, suddenly chomping their ship and showing no mercy! 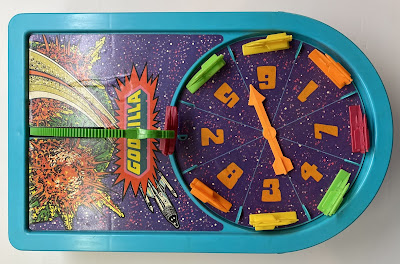 One thing you will see here (at the end of the post) is the instruction sheet, which is pretty rare for some reason.  What I found really interesting was the opening paragraph:

"The evil Godzilla is raiding the galaxies, bent on revenge for having been driven from the planet Earth.  Now he is hiding behind an asteroid (a small planet) hurtling through space.  You've got to maneuver your spaceships around the asteroid and avoid the horror of being caught in Godzilla's radioactive jaws.  The last player to have spaceships on the wheel wins the game and lives to fight the monster another day."

Interestingly, while the game alludes to some continuity by insinuating that Godzilla is out for revenge and "driven from" the Earth, it doesn't quite jive, considering he was Earth's defender in his last several films...not to mention, the helpful sidekick to a boat-crew of humans in the animated series that started airing that fall! There is a bit of continuity to be found though; hold that thought... 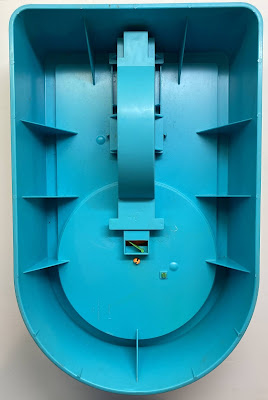 What I never grasped, for all these years, was that Godzilla was supposed to be popping out from (or "hiding behind") an asteroid.  I mean, if you look at the artwork for the game, you can see the round edges of a green planet-looking shape, but it took finally obtaining the instruction sheet for me to understand exactly what was going on.  What a strange concept, especially for the time (even though most everything was space-themed in 1978, for the obvious reason)...we wouldn't see anything even close to that idea in an actual film until, what, SPACEGODZILLA? Sort of? 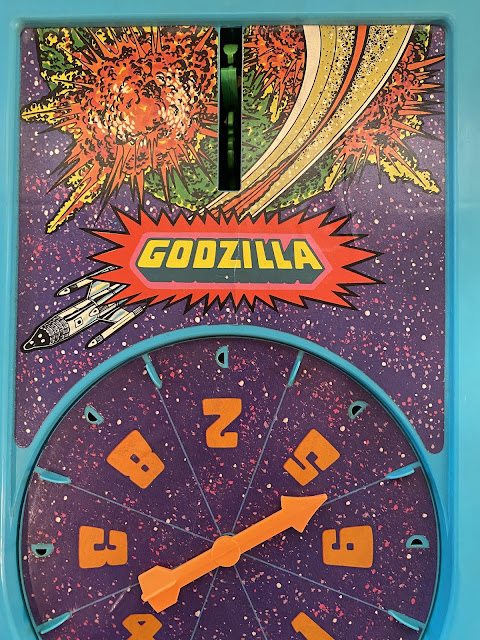 The instructions have some amusing artwork, especially at the bottom of the first page, where happy kids' faces show you where you are supposed to sit...with a large DO NOT SIT HERE, which, you'll note, is exactly where the overacting girl is who steals the show in the commercial! 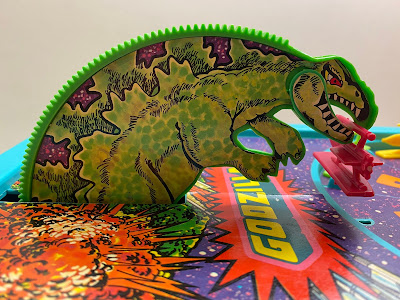 And, there's a little more strategy involved than I knew of as a kid.  If the spinner stops at a blank space, you are required to move one of your spare (not on the board) spaceships to that space before taking your turn.  Conversely, if the spinner points to one of your own ships, you can actually trade places with one of your opponent's ships "if you think Godzilla is about to strike"!!! We always played the "Quick Fun Game" version, listed at the bottom of the second page, where you replace a ship from your own inventory as soon as it's been nabbed by Godzilla.

Also, note that Mattel would actually send you an entire spare set of 24 more spaceships for a measly two bucks...and it doesn't say anything about shipping and handling! 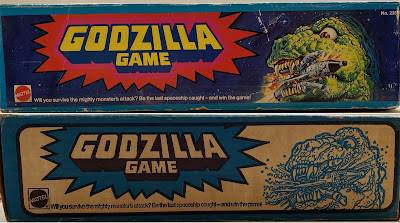 The game boasts some incredible, striking artwork, and besides the front of the box, there are three additional portraits of Godzilla to be found around the base itself! 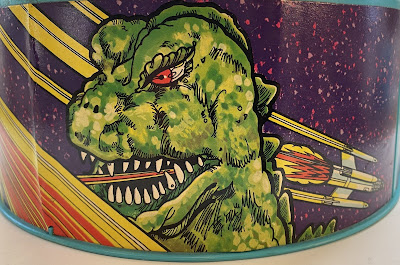 Now, take a close look at that third panel of artwork...do you notice anything interesting? 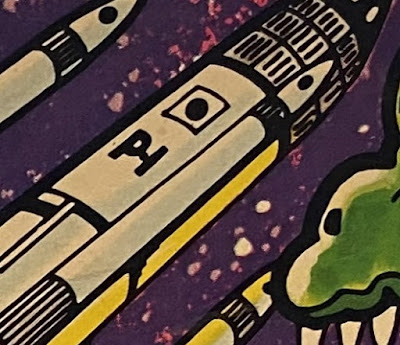 On the side of the spaceship is "P-1"...now where have I heard that before? Then it struck me: 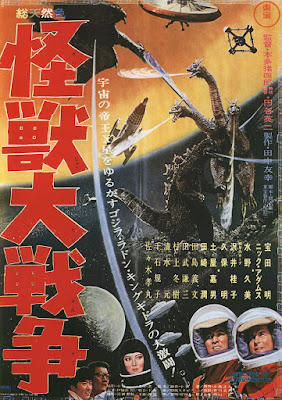 The P-1 is the name of the spaceship in MONSTER ZERO! My mind is blown.  Now, I should point out that there was a real-world P-1 that blew up on the launching pad in 1959, but clearly our game-makers, or at least the artist, are true fans.
I can't top that, but here are the scans of the instructions, as promised!

Posted by Sampoerna Quatrain at 13:51