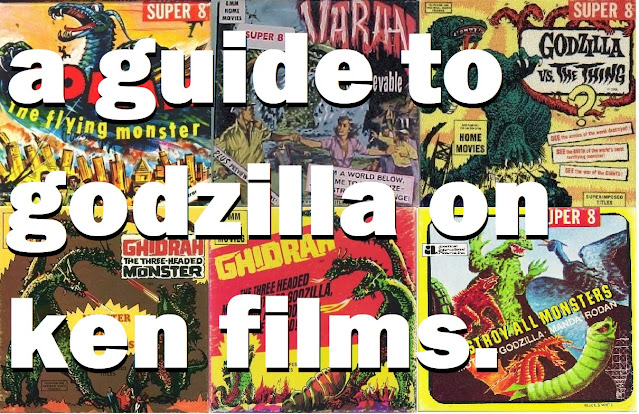 I utilized some down time last year to get to the bottom of this particular and unique Godzilla collectible.  We scratched the surface on this subject in our series of Godzilla in the 1960's posts, but now it's past time to complete the discussion, and, once and for all, put these into their proper place on the calendar of Godzilla collectibles. (You often see these films referred to as being from the decade of the 1960's, because people assume that they were released close to their theatrical release dates, but this is not even close to true.  Only two of the films on this list were made available in that decade!)

Home movies were the very first way that you could enjoy a motion picture in your own home, on your own schedule.  Not only that, but for the first time, you could own it.  Granted, these early 8-millimeter films were black-and-white, silent (often with added subtitles), and only excerpts, but film collecting as a hobby had begun.

Ken Films was only one of the companies who issued such films.  They were probably the smartest, because they endeavored to make as many licensing deals with major studios as they possibly could.  Their catalog was large, and they survived into the early days of the VCR.

Five of the seven releases were are going to examine were available in two lengths:  50-foot reels (which lasted around 3&1/2 minutes) and 200-foot reels (which lasted about 14 minutes).  It is important to point out that the box art, from a front view, is completely identical between these two sizes.  If you are looking at an Internet auction, and you are shown no other items to compare the scale, you will have no way of knowing what you are trying to buy, unless you can see (or ask for) the item number on the spine of the box.  The 50-foot reels had numbers that always started with the digit "5," while the 200-foot reels always began with a "2."

The invention of the Super 8 format in 1965 added variant editions to the films that were released, meaning that there were now four releases for each film (50 and 200 foot versions of both 8mm and Super 8). You might suspect that the arrival of color and sound created even more editions of each film, but this is not the case.  In fact, by the end of our list, Ken Films had dropped the 8mm format completely, as you will see.

8mm: 50 and 200 feet; Super 8: 50 and 200 feet.
You'll notice that Ken Films often merely used stickers to indicate a Super 8 edition.  In the mid-1970's, they changed this practice and began printing a red SUPER 8 box in the upper-right of the artwork (as I said, they dropped 8mm completely at this time, so it made sense).  Not all of the films on this list were reprinted, but I have seen a couple that were, thereby creating another variant, if you are so inclined! 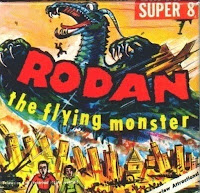 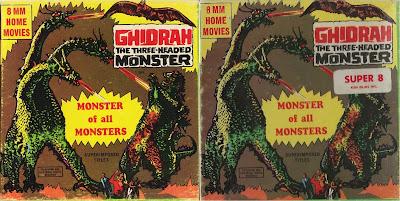 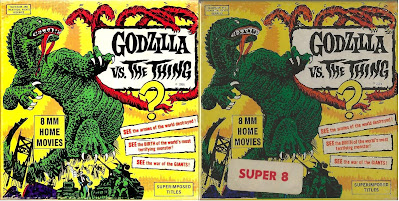 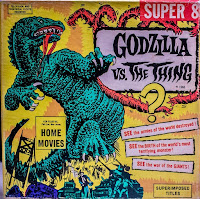 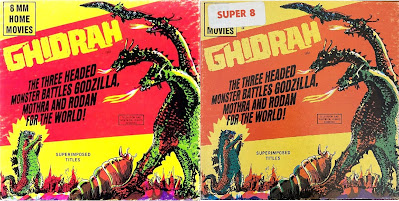 Super 8: 200-foot B&W silent, 200-foot B&W sound, 200-foot Color sound.
Here is the most unique film on our list, because it was only available in three types, and all of them were the larger 200-foot versions.  Ken Films wisely realized they had to treat this one right, and God bless them for it (although that's one of the worst depictions of Rodan I've ever seen; he looks like one of those bobbing drinking bird toys).  This compact edition of the Toho classic (featuring the original AIP dub of course) was so good, it was even restored and included on the Tokyo Shock Blu-Ray of the film...which Toho later ruined by pulling all of the Special Features (booooo!).  The color and sound version is an expensive film, if you can find it today.
7) Frankenstein Conquers the World (Ken Films #278, 1975.) 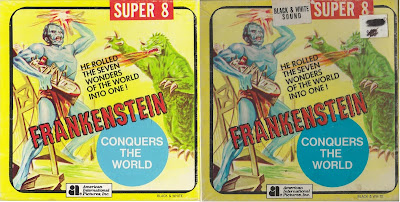 Super 8: 200-foot B&W silent, 200-foot B&W sound.
The only other Toho film that Ken released with sound was the beloved Baragon's initial outing, but they did not take it all the way to glorious color, as they did with DESTROY ALL MONSTERS.  Unfortunately, they merely paid somebody to reproduce artwork from American posters (which was a common Ken Films practice, to varying results), which meant that nobody actually watched the film first, and realized that Baragon was supposed to have ears!
We conclude with a handy chart, showing all of the Ken Films releases we've discussed:

If you're keeping track, that makes a total of 25 films altogether.
Posted by Sampoerna Quatrain at 09:19