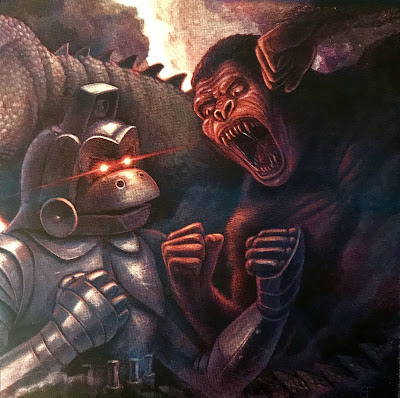 From 2018, here is the super-limited vinyl edition of Akira Ifukube's amazing soundtrack for KING KONG ESCAPES.  Limited to 100 copies, this record was produced on brown "Kong Fur" vinyl. 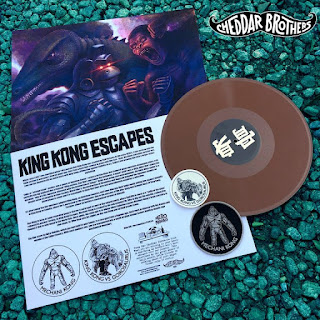 This record was produced by Cheddar Brothers in 2018, and came with a patch and a sticker, which you can see in the photo above.  The artwork, although distinctive, was unfortunately not produced on a complete jacket, merely a folded card, the back of which you can see better here: 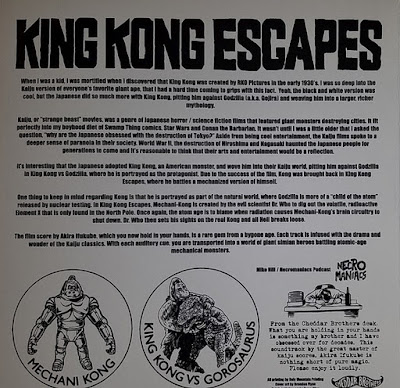 The absence of a proper jacket wasn't the biggest problem with the record, though.  Turns out, when you have a small run quickly produced in Mexico, errors in quality crop up.  Don't worry, you won't know it, because I was able to fix them myself [for example, in between every track was a small "Pbbbt" sound, a literal divider present on the master tape--in other words, this was supposed to be taken out by the people making the vinyl].  One interesting thing in the very first track was what sounded like surface noise (on a disc that had never been played and had been properly cleaned), but when I compared the track to what's on YouTube from a digital source, the tiny sounds were part of the original recording after all.
For a complete track listing and run times, see here.
A second run of 300 copies was produced later in 2018 which was on silver vinyl, included a normal jacket with corrected artwork (moving Gorosaurus into view), and, hopefully, corrected the various mastering errors.
Enjoy this often-overlooked rarity!
LINK:  King Kong Escapes (OST, 1967)
Posted by Sampoerna Quatrain at 07:33