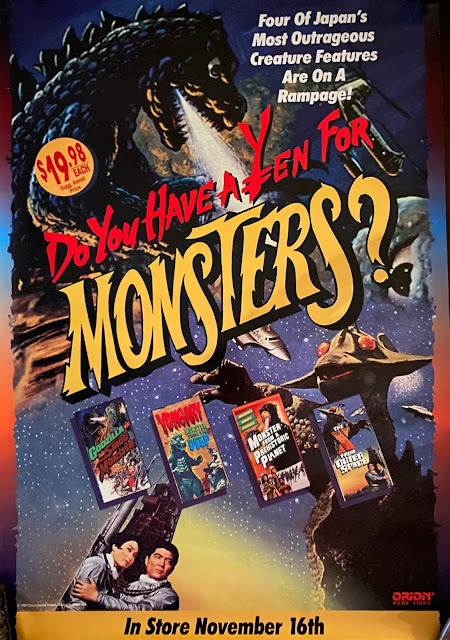 It's always a little difficult to get a good photo of a rolled poster, but here is a pristine, unused example of the video store poster for the great 1989 promotion by Orion Home Video! It measures 27 x 41" and is the size of a standard one-sheet movie poster (which is nice because sometimes, video store posters are smaller).

This of course was the promotion that not only brought the AIP dub of GODZILLA vs. THE SMOG MONSTER to our homes (this videotape and/or its accompanying laserdisc continue to be the source of the audio for fan restorations, all these years later), but also MONSTER FROM A PREHISTORIC PLANET (which we now know as GAPPA), YONGARY (a Korean kaiju clone), and THE X FROM OUTER SPACE (who we now know as the fun-to-say Guilala).  Not too long ago, I also shared a dealer postcard from this promotion, which you can see here.

I can completely understand Toho trying to streamline kaiju names, and get down to only the "official" dubs that they support, but I wish they would still make our original American audio tracks available.  It doesn't mean they have to be erased from history, because after all, they happened, and are much-beloved.  Maybe this could possibly happen...Recently, Toho began sharing episodes of the Hanna-Barbera animated GODZILLA series from the 70's on their English YouTube channel, and I certainly never thought we'd see that day.

Posted by Sampoerna Quatrain at 06:09