SUNDAY MORNING WITH THE COMICS (Reprise, 1966) 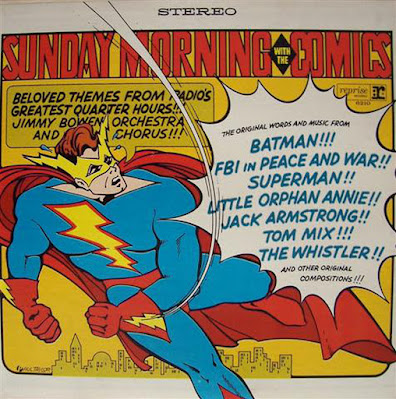 Let's get started on what will be a large group of exclusive offerings that can be found nowhere else but this blog! Well, as far as I can tell, but I assure you, there are some genuine rarities coming up, including some audio, some Godzilla-related items otherwise thought lost to time, and probably some goofy crap that may leave you wondering what's going on or where the exit is.

This first item is a super-rare LP from 1966 that eluded me for years and seems to be nowhere...but it's here now.  Once I obtained it, I realized why it's so rare:  quite simply, it's not very good! It has a real problem of not knowing what to be.  It looks like it began as a tribute to what we now call OTR (Old-Time Radio), then quickly jumped on the Superhero bandwagon as the cover shows you (seeing the year of 1966 should have been your first clue), and then somehow decided to attempt to be satire...or parody...or comedy...or something.

It's a little hard to be comedic when you are trying to capture the young BATMAN television audience, and at the same time alluding to defunct oddities like whatever "Jack Armstrong, All-American Boy" is, AND mixing those misguided tributes with original "satirical" creations that aren't funny at all ("Captain Gorgeous" and "Wonder Mother" for starters).  I mean, "Wonder Mother" could almost be a straight Wonder Woman feature, but sounds like at the last minute, somebody decided to make it "funny."  Don't tell me they chickened out of featuring DC characters, because Batman and Superman are right there in the track listing...except while the Batman theme is a solid, and very rare version (don't worry, it's already been added to our collection of Batman TV Themes), they took the great Sammy Timberg Fleischer Superman theme and used it for a weak pantomime bit about a super weakling called "Pantywaist" that was already not funny even by 1966 standards.

The schizophrenia continues, because even though the track is listed as "The Green Hornet," it's in reality a send-up titled "The Green Hairnet" [groan].  Which is followed by a completely straight-faced tribute to Little Orphan Annie.  And it continues from there.  It's like three different potential albums collided in a hurricane, and left us with this one. 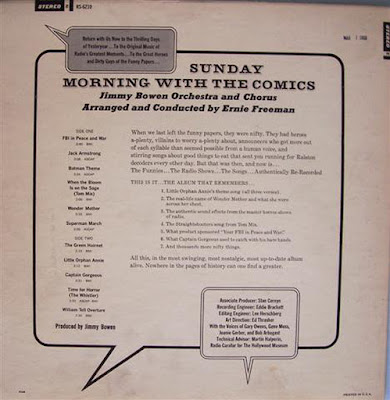 Besides the Batman theme, this LP does have a few other good things going for it.  I should point out that the music was competently provided by the Jimmy Bowen Orchestra and Chorus, and that there are some familiar voices to enjoy, such as the great Gary Owens and the great Bob Arbogast.  So, enjoy this tribute to the golden age of radio...I mean, this pastiche of colorful superhero camp...wait, no, I mean, this collection of original hilarious satirical creations.  I give up.

Posted by Sampoerna Quatrain at 07:03