I'm not sure where to even begin on this one.  I'm featuring it in a post because it's one of the most unique releases of a Godzilla movie in the United States, and seems to be the only one of its kind.  However, it's also the single worst piece of Godzilla-related home video in existence, by far.

Take yourself back to 1994.  (If you weren't there, just take my word for it; after all, we've never steered you astray yet.)  The mania of home computers had been slowly building over the last ten years, and the general public was beginning to hear about this Internet thing existing, where you could do stuff.  The problem up to this point was, there wasn't really that much you could effectively do on your IBM PC Junior.  I mean, they wanted you to, but most people found no good reason to stop writing in their checkbook ledger and instead type it all into a non-user-friendly computer before Windows 3.1, just to be able to say they were doing it.

But suddenly, by 1994, there was a huge push to do everything that you physically could on your own home computer.  Even stupid, mundane things, like print your own birthday party invitations (even though scanners sucked, and printers sucked, and most likely weren't color anyhow, but instead dot-matrix abominations that, hey, at least could do...banners).  Those users who could get to the Internet were usually mired in bulletin board type things, as the rise of the website hadn't really happened yet.  Enter the CD-ROM; a magical disc full of data that you could reference, and look stuff up.  Suddenly (to overuse that word), scores of them appeared everywhere, which were usually in reality just books on disc.  You now had libraries of recipes, movie guides, medical information...even though you probably already had this on your shelves in...you know, actual books...but now you were doing it ON YOUR COMPUTER.  You had arrived.

And then somebody figured out how to compress the holy tar out of video, and realized you could even put movies on a CD-ROM, although this idea stayed off in its own corner, because the DVD format was in the process of launching, and it wasn't about to derail that as the next choice for officially-released home media.  But none of that mattered, because you could watch the CD-ROM...ON YOUR COMPUTER.

Which brings us full circle.  Do you recall the old maxim of "just because you can, doesn't mean you should," which is actually a universal law? Well, it applies in spades to this concept, as we are about to see.

Alpha Video, one of the many purveyors of public domain VHS, took advantage of this new public fascination with CD-ROMs and put some of their titles on disc, under the brand name of "Chestnut" (their logo is just unfortunate, and that's all we are going to say about that).  Even if you take into account that the tools necessary to use this product include a 386 computer with Windows 3.1, you're still going to be shocked how excruciatingly bad this disc is.

There's a great joke to be made here about how the Godzilla movie chosen is MEGALON--it would be MEGALON after all, because it's probably the most-bootlegged movie in the history of the world, and for years was the go-to Godzilla movie for even the most nobody of nobodies to release on home video (even into the DVD era).  Public domain releases commonly consisted of cropped, dirty 16mm prints...but this, my friends, takes the proverbial cake.

But what did Alpha Video have to say about the "quality" of their product? Here is the back of the artwork: 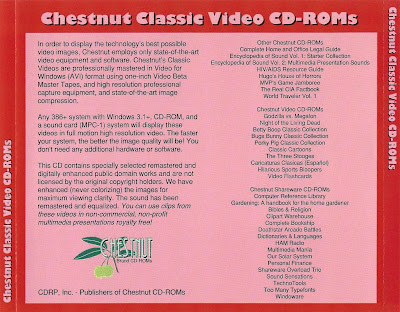 If you prefer bullet points, here is the rundown:
* "best possible video images"
* "Chestnut employs only state-of-the-art video equipment and software"
* "professionally mastered"
* "high resolution professional capture equipment"
* "state-of-the-art image compression"
* "remastered and digitally enhanced"
Of particular interest to me was "The faster your system, the better the image quality will be!" which we in the modern era know isn't even close to being true. 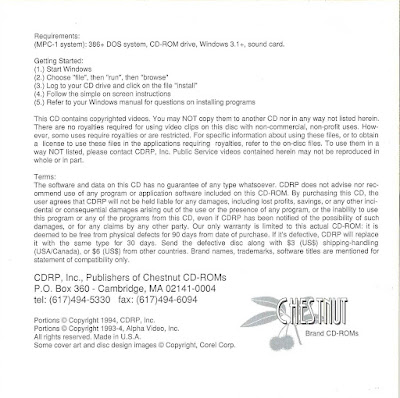 It's also funny to me that they go out of their way to tell you it's a public domain work, but that you can't do anything with it, except that you can use it royalty-free for things...but don't sue them. And one of the many reasons you can't sue them is for "inability to use the product." Um, what?
And now, if you've hung on this long, click upon these screenshots, ye mighty, and despair! 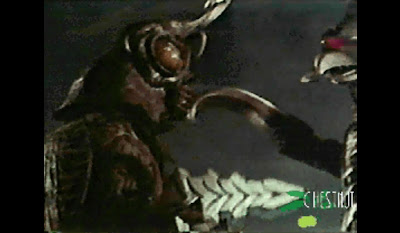 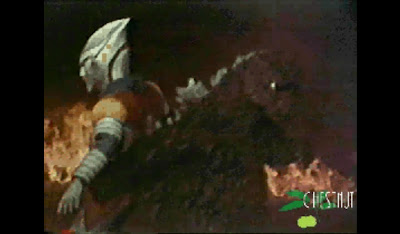 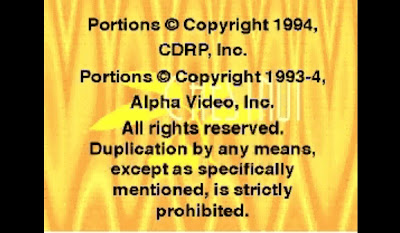 I know monitors were more square back then, but I left the sides of the screenshots intact, so you could see how cropped and terrible this print really was, before they went and enhanced it and made it look more like dark amoebas under a microscope than an actual movie.  Remember the terribleness of Real Player, in the early days of the Internet's popularity? Well, this disc makes Real Player look like real life.  Not to mention the omnipresent lines, scratches, and even burn marks.  It's just that bad.  They even fail hard at placing their own logo as a watermark in the corner, which isn't even legible.  And I haven't even mentioned the audio, which is a complete train wreck of skips and awfulness!
I was about to say how shocking it was that they didn't even bother to commission artwork for the front of this turkey, and used one of their own murky screenshots.  This caused me to go back and look at the cover more closely:

Somebody colored in Godzilla's teeth.  Or more accurately, removed pixels like you do in Microsoft Paint.  Somebody's boss decided this blob on the cover didn't resemble Godzilla closely enough, and told an underling to fix his teeth!  Unbelievable. 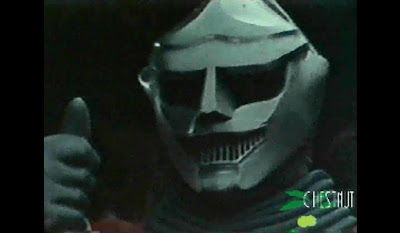 Dear Toho:  please come and take your movie back so it won't be public domain any more.  Oh wait, you already did.  Thank you! I think.
Posted by Sampoerna Quatrain at 08:28

Older Post Home
Subscribe to: Post Comments (Atom)
Snake and Boris welcome you to a mysterious old tavern called The Sphinx. Here we will discuss many interesting things. You will notice many signs on the wall. One says, "A splendid time is guaranteed for all," and another, "An acorn is just another nut in a beret."