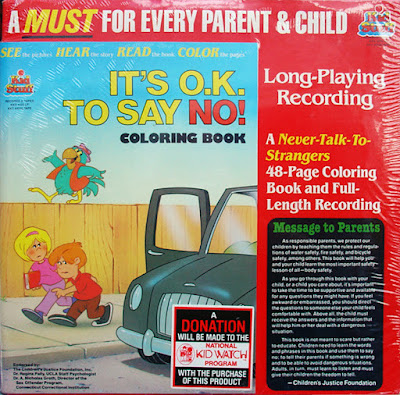 We have to talk about this.  Not too long ago, I found this record in a thrift store.  Except that it looked like this: 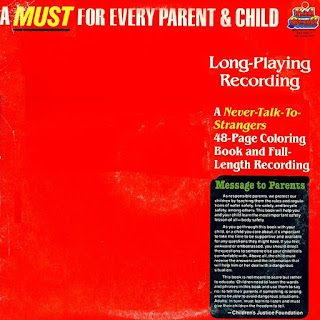 It was very red.  I didn't realize at first that it was supposed to include a 48-page coloring book.  And it didn't matter, because Kid Stuff was getting into the 1980's safety record, and I recognized the potential for comedy gold.  I had to hear this.  And, it doesn't disappoint.

Let's get the disclaimer fine print stuff over with first.  As it goes without saying, child abuse is not funny, and of course, nobody here is saying that it is.  What is funny is trying really hard to get some of that sweet government grant money by cranking ridiculous records like this out, attempting to address this rather shaky subject matter head on and "seriously," and failing miserably in the process.  Let's face it:  records of this type never helped anybody, and never prevented one crime from ever happening.  "McGruff the Crime Dog" probably did (except for when he sang songs like this), but...this record is no McGruff the Crime Dog, as you will see.  This is equivalent to those vice or health filmstrips they used to show you in junior high, except that you couldn't hear the audio because you were laughing so hard.
And, speaking of terrible singing, we begin this record with...a rap.  You heard me right.  After all, how else do we get "the kids" to listen? I always imagine decisions like this being made around a boardroom table, because it makes sense to me, but don't do that here, because this is Kid Stuff records.  There was no board.  Just a guy and somebody's brother-in-law who said they could "make a rap" for a case of beer.  As soon as it starts, you know you are onto something amazing.  It has a ridiculously sweet and out-of-place synthesizer--which is one in the Plus Column--but then the guy begins the whitest lyrics ever, and a chorus you will never free from the innards of your head once you have heard it.  All of this is bad enough, but it's this last verse that particularly annoys me:
You need to have a good kind of love
Don't be afraid to kiss and hug
But just make sure before you do
That happiness will come back to you
I don't think happiness as a motivation is the point we want to get across here.  After all, couldn't that also be the motivation of the criminal/perpetrator, too? This record is supposed to be about running away from danger; could we not have thrown together a stronger concluding verse, and maybe do a better job of firmly coming down on the side of, oh I don't know, non-molestation? FAIL.  And it's just the first of many.
The main takeaway of this record is this: if an adult approaches you and/or asks you a question, you should shriek "NOOOOO!" like you are on fire and then run away screaming.  I wonder how many kids got in huge trouble by just following this record? "This will be on your homework, class...Tommy, what is 3 times 3?" "NOOOOOO!!!!! ARGGHHHH!" 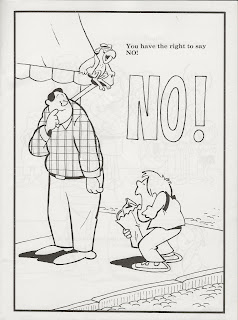 I haven't even mentioned that the entire coloring book has been obtained at great expense (ok, a great six bucks) and completely scanned for your enjoyment here! You should listen to the record without it first like I did, because when you do read along, it's an incredible let-down, and your imagination was a million times better.  In fact, let's look at some of the mighty fails that the book provides! 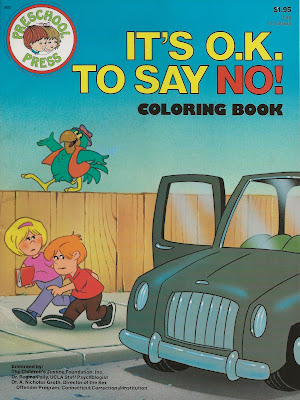 Right off the bat, we see an oversized green parrot with an orange vest and hat, on the center of the cover.  Ah, every kids' record needs a mascot, right? Is this the narrator of the record? Nope.  Is this a guide for the various children who are featured in the coloring book? Nope. Does he ever speak? Nope.  Does he even have a name? Nope, nope, nope.  He will make continuous random appearances with no explanation.  For the purposes of this post, though, we will give him the name of "Gropey."  As you can see here, these children are completely oblivious to Gropey's presence, even though he looks like he's about to go full Schoolhouse Rock and burst into song. 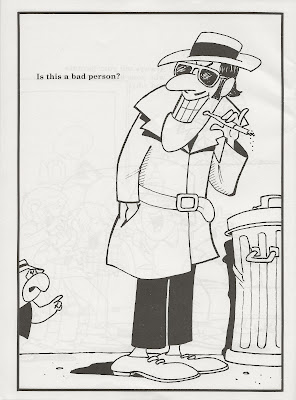 Actually, no, that's Fargo North, Decoder, from The Electric Company! He's cool.
We could go on all day! I haven't even mentioned:
*the amount of pointless filler in the coloring book
*the other hideous songs filling space on the record (there's one that will shock you when it starts as totally rocking background music, and then they put words to it and ruin it).
*the narcoleptic narrator
*page 9, where Gropey looks on from inside the house of the neighbor woman who wants to touch you
*the fact that this whole exercise amounts to a minute and a half of content repeated and stretched out to over 28 minutes (the opening rap is presented again in full at the end, because of course it is)
What else can we say (besides NO)? There's no way to adequately prepare you for this.  Scream NO at someone today, won't you?
LINK: It's OK To Say NO!
Posted by Sampoerna Quatrain at 14:22