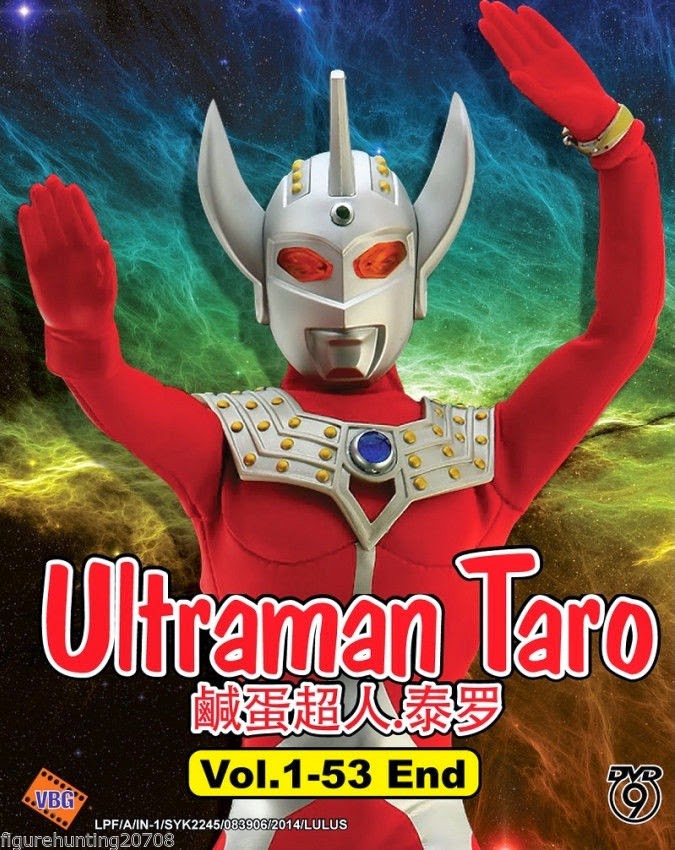 Internets, you are supposed to keep me informed about these things! Accidentally on E-bay (which is a Bob Dylan song title I think), I discovered this newly-released DVD set, hot on the heels of the last one (so much so that it's almost running right over poor Ace).  And I haven't finished the first disc of Ace yet.

Of course, I ordered it.

But, Malaysians, you have got to slow it down, just a bit.  Just give us a few months to get caught up on our tokusatsu-binging.

Ugh, I just broke one of my own rules, and used "binging" to describe watching TV.  I hate that word...next I'm going to be calling my screenshots "screenies."

Taro is unusual, because up to this point, it's actually been "totally" "available" in English-but-not-really-English.  In other words, it's one of the early Ultra shows that was dubbed by Malaysian TV into really terrible English.  The sound is muffled, uses some words that aren't even real, and at times is impossible to understand, resulting in lots of rewinding, which is often futile.  I'm assuming they just took people off the street, asked them if they spoke "English," had them read some lines, gave them a Big Mac, and sent them home.
The strange thing is that all 53 episodes are available this way, which wasn't true for the earlier shows.

Now, I have endured all of these episodes in the past, and here are some random memories I have about Taro:

1) In the first episode, we see him being born.  I think.  The Ultra Brothers stand around a large glass dome in a darkened room, there are some noises, and a fully-grown Taro appears inside the dome.  (Years later, in 1983, came the ULTRA STORY movie that showed us Taro's delightful childhood, so make sense out of that.)
2) Taro is about as silly as it gets, taking the series full-circle from the early days of hard, Tsuburaya-controlled sci-fi/horror/mystery to giant floppy alien turkeys and lots of sped-up film for "comic effect."
3) Taro is a simpering dolt, and is constantly getting his red and silver backside handed to him.  When this happens, he invariably has to be healed (sometimes resuscitated) by his Mama...at one point she has to restore him from a decapitation.  Imagine Ultraseven in such a position.
4) Taro's human host is a boxer, and, if I understood correctly, just gets tired of having to deal with Taro (but then again, I might also), and just asks to be un-united so he can go do something else.
5) Taro's human team is ZAT, and their uniforms and helmets follow the tradition of growing more garish and ridiculous with each series.
6) In recent movies, Taro has been portrayed as a caped past-master of Ultra badassery, but in the last completed series (Ginga), he was relegated to a goofy talking action figure.  I kid you not.

All of this results in one good thing:  Leo is next.  Leo (whose personal trainer is Ultraseven!), in all my years of trading and scouring the Internets, has never been available in English, dubbed or otherwise, so this should be exciting.
Posted by Sampoerna Quatrain at 08:49

I bought this set as a 26 VCD set. All 53 episodes. All cd's are factory pressed with factory cd covers.

I had a complete set of Ultraman Dyna that way once, but they sure weren't English. You are lucky!

I'm assuming they just took people off the street, asked them if they spoke "English," had them read some lines, gave them a Big Mac, and sent them home.

Pretty much describes Southeast Asian dubbing in a nutshell.