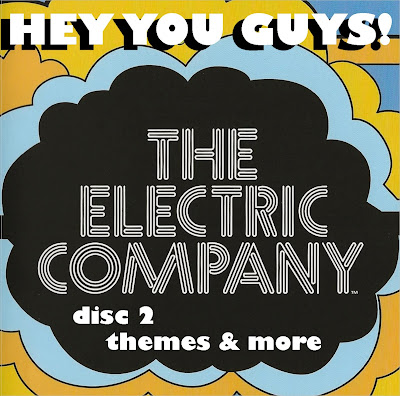 Continuing with my new set paying tribute to THE ELECTRIC COMPANY, here is disc two! This disc starts where the last one left off:  the presentation of the two book-and-record sets concludes the recorded output that was officially released (and, the scans for the books are also included, so that you can follow along). 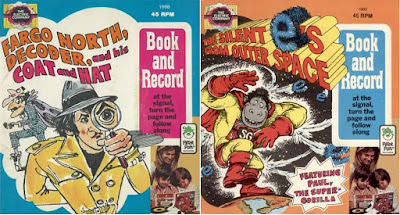 The stellar theme for the show was one of Joe Raposo's finest moments (in a long list), and the next section presents all of the various versions, spread across six seasons, with both opening and closing themes.  (There are some extras, too, such as an officially-released unique version from a promo 45, a unique mix from a documentary, and even an unusual "cover" version from a children's record.) Some of the daily promos were also included, because I know that in the minds and hearts of fans who grew up with the show, they are part of the themes to them! 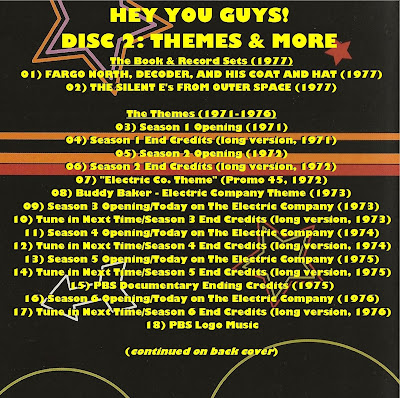 Any discussion of ELECTRIC COMPANY themes must not leave out the Spider-Man segments, which included an incredibly iconic and memorable theme by Gary Friedman. The different versions are included here, as well as the full-length one that he released on a promo 45 in 1975. Next, we have an example of one of the most famous EC segments, Letterman! I included it here, as opposed to disc 3, because of the great music that these segments had (as well as great voice actors).
Finally, no discussion of the ELECTRIC COMPANY is complete, either, without including the songs that Tom Lehrer supplied for the show.  Long-time visitors to The Sphinx will know that we are huge Tom Lehrer fans here (search this site for SEVERAL Lehrer rarities that I moved to Google Drive, to maintain the links! In fact, Mr. Lehrer was kind enough to allow me to keep offering them here!) There are actually a couple of items here that got left out of my TOM LEHRER RARITIES sets, while everything else has been improved in some way, so don't miss these!  Unfortunately, the tenth and last Lehrer ELECTRIC COMPANY song (entitled "Without an S") still remains unavailable.  However, the info section of this download does include the lyrics, so we can have some idea of how this would have sounded. This section concludes with a 9&1/2 minute interview Mr. Lehrer did that was included as a bonus track on the ELECTRIC COMPANY GREATEST HITS AND BITS documentary. 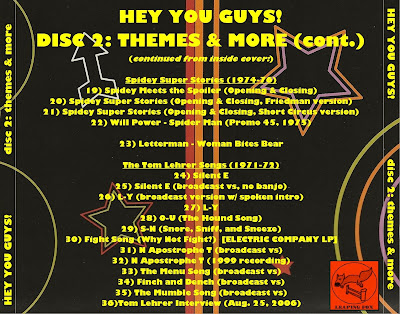 Like I said, don't miss this one! Enjoy! DISC TWO HERE.
Posted by Sampoerna Quatrain at 08:17