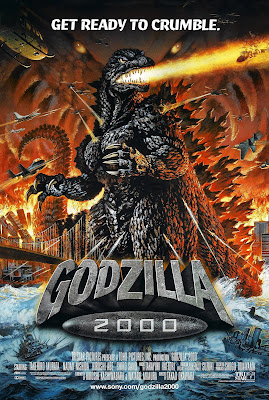 Say, remember GODZILLA 2000? No, it's not one that I go back to and watch either, really.  It was fun to get another Godzilla movie to appear in American theaters (woah, that was 20 years ago...it wouldn't happen again until SHIN GODZILLA!), but even at the time, the CGI seemed behind the curve.  I'm sure it hasn't aged too well, but it gave us a great Godzilla design, as well as an interesting and fun villain monster in Orga.  I remember really liking the battles, and the part where Orga attempts to swallow Godzilla is unforgettable.

If you were like me, and got to see the film in theaters, you would remember a completely different thing happening at the ending, other than what you can see on VHS/DVD/Blu-Ray/TV airings.  In fact, here is a commenter from IMDB explaining it better than I could: 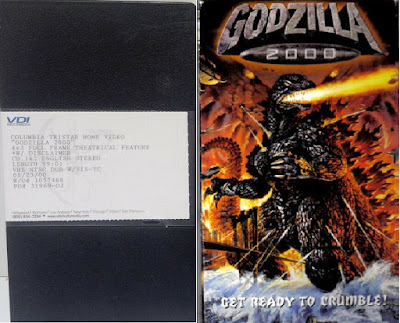 A year or so ago, I lucked into a demo copy of the U.S. VHS version of the film, made by VDI Multimedia.  The entire demo is time-coded, as below: 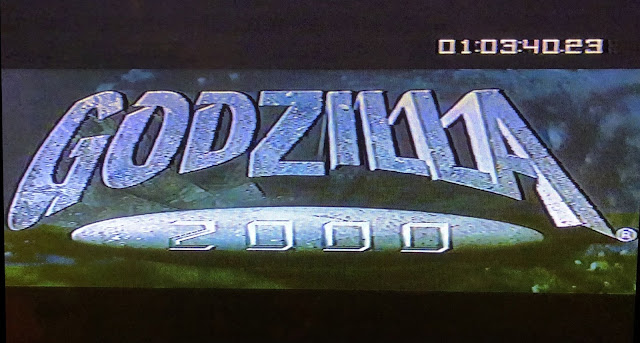 Years ago, there had been a YouTube video (not sure if it's still up***) showing the original ending card of the film, and I remembered that it, too, was time-coded. This video was just somebody filming their TV, so it wasn't great quality, but it struck me suddenly that they must have also had a similar demo tape...so, it was time to dig out the VCR that I keep in my garage for emergency purposes, such as this! 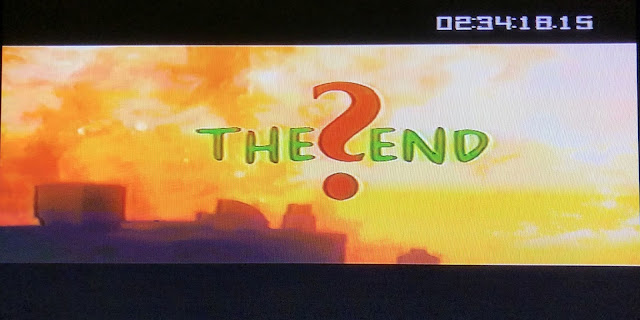 And there it was.  Obviously, Toho's request to remove the ending card came after some sample VHS tapes had been made, but there was still time to remove it for the finished product.
So there you have it.  Not a crucial part of Godzilla history, but an interesting footnote, nonetheless!
***NOTE:  The video is gone, but now there is a much better one, by the great SpaceHunterM (I should've known):
Posted by Sampoerna Quatrain at 11:10