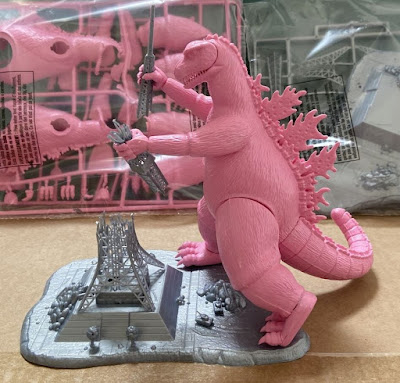 As we have discussed here (for a full history of Aurora's Godzilla model kits, containing everything you need to know, see this comprehensive article at Sean Linkenback's Showcase Daikaiju!), Aurora produced a "Monsters of the Movies" series in 1975. 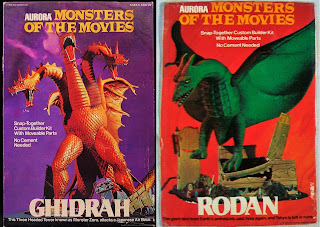 These kits were designed by the late, legendary Marvel artist Dave Cockrum.  However, another of the designs he submitted was for a Godzilla (you can see a photo of the prototype, now in the hands of a private collector, at the aforementioned link).  This went as far as being sculpted by Ray Meyers, but, for reasons unknown, never saw the light of day. 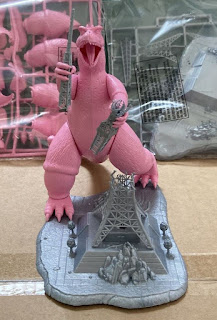 But then, a couple of years ago, as my Ebay seller wrote, "someone got a hold of [the] Aurora patterns...took the resin kit to make styrene plastic kits." My understanding is that a limited run of 100 were produced, and quietly sold online for a short time.  It's my belief that the leftovers of this run are what has recently been sold off on Ebay. 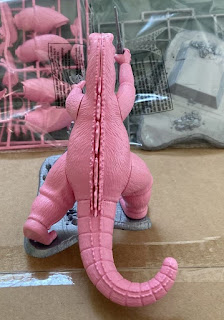 At 7" tall, the kit shows Godzilla in a dynamic action pose, with one foot plantarflexed behind him as he steps forward to lean over a destroyed Tokyo Tower.  What's even cooler is, he holds remnants of the tower in both hands! This would've been a strong addition to the line of models, and, honestly, would've offered a huge amount of star power.  The closest Aurora Godzilla to the M.O.M. line was the 1972 glow kit reissue, and it didn't match Ghidrah and Rodan nearly as well as this design would've. 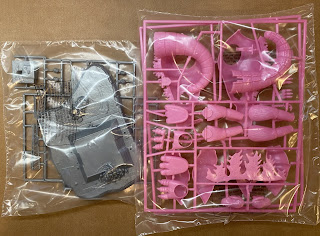 The kit is without instructions or box, since it never got any farther in the design stages.  However, I can only thank "someone" for making it possible to see what this part of Godzilla history would've looked like, in three dimensions! 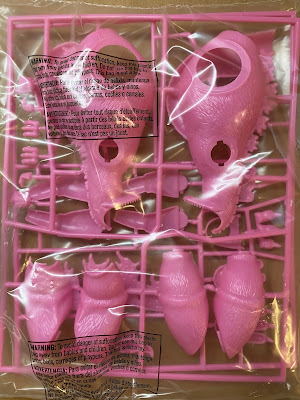 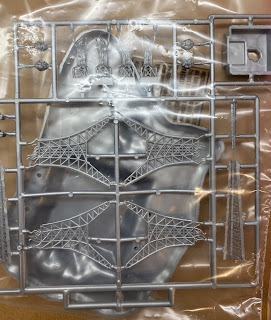 Posted by Sampoerna Quatrain at 13:19