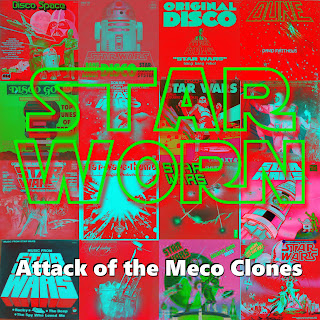 Today we conclude at last this Herculean effort that made me question my very sanity, with discs 4 and 5 of the Star Wars Theme Covers Collection.

If you are here, then you no doubt remember the iconic Star Wars LP that launched Meco's career: 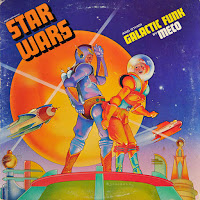 Meco (here we refer to the artist; the backing band used for live performances was also called Meco), who had seen the film on opening day and several times soon thereafter, can attribute a portion of his success to his expediency and speed.  His idea for a disco project based on John Williams' soundtrack was arranged and recorded in just a few weeks, and was at the head of the pack of Star Wars cover records.  Not only was it a hit, but it cleverly reduced the soundtrack and story of the film into a fun, 15-minute side of an LP (and had a great cover, too--I have one in a frame!). 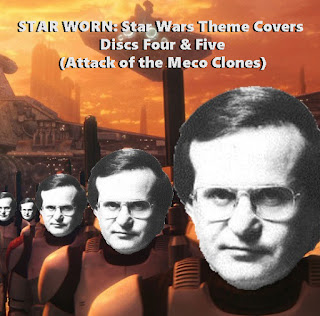 What I failed to ever realize was that it had apparently spawned a cottage industry...covers of his cover quickly began to appear all around the world.  We can only assume that this was approved and/or licensed, but as we say in the liner notes to this project, it sounds like some of these records even occasionally utilized Meco's backing tracks! 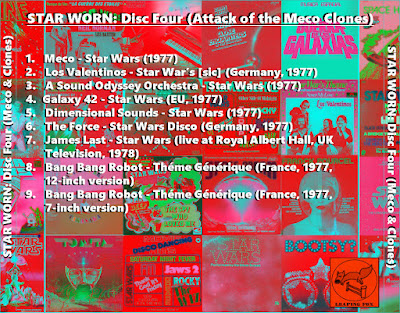 Some were trying to get a piece of the pie from that sweet, sweet edit version of the Main Theme from Star Wars, which was a #1 single, by the way.  But some opted to cover his entire 15-minute suite, as you will see.
Results vary, as you would expect.  Somebody called "Galaxy 42" decided that the song needed some words (it didn't work).  James Last, the "Gentleman Conductor" from the UK, gives us a rousing live version (from the Royal Albert Hall), as does the backing orchestra for the Japanese duo, Pink Lady, and both are great.  One rare record from Germany by "The Force," which I actually waited on--in our new habitat of Virus World--for many months, arrived disappointing, and even a little skippy.  An outift called "The Tennessee Guitars" attempted to put some steel guitar swing into the arrangement, and as such it's a standout track for its uniqueness.  Surf-rock legends, The Ventures, sound like they are at a desperate crossroads of their career, however (and the track was only released in Japan), and may have been asleep.  It should also be pointed out that several of the other tracks are merely the same recordings under new names--as stock filler tracks for kids' albums--which we explain in the liner notes. 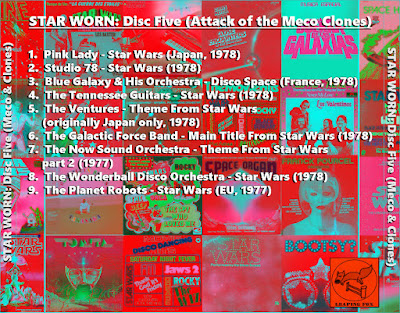 Meco, of course, went on to an entire career that was launched by his Star Wars project, and released several other albums of film themes and soundtrack music (another vintage phenomenon which would be impossible in the modern day...how many current film themes can you name that have been hits, even to the point of spawning covers? Right.).  He also was smart enough to continue his Star Wars output with great music from the two sequels...with the innocent but dreaded "Christmas in the Stars" LP coming in between.  We could joke about that album being right behind the Holiday Special in cringe factor, but: 1) we all treasured it as children, and 2) he no doubt made a FORTUNE from it, so more power to him.
We hope you've enjoyed this journey through no less than 53 versions of the Star Wars theme.  Should you ever discover an additional, pre-ESB version that we've missed, send it our way.
LINK: Disc 4: Attack of the Meco Clones (part 1)
LINK: Disc 5: Attack of the Meco Clones (part 2)
Posted by Sampoerna Quatrain at 06:55