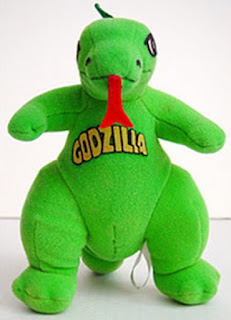 Here's another famous (infamous?) American Godzilla item that we haven't gotten around to covering yet.  In 1978, as merchandising for the Hanna-Barbera Saturday morning animated series, Knickerbocker issued two bean-bag plushes under the name "Bean Dolls." They are the sort of item that, if you had them as a child, you remember fondly, but if you acquired them as an adult, you regard as completely goofy.

Godzooky items of any type are a rarity, but one thing to note about these guys is that they are exactly the same size.  Godzilla is standing, though, which was probably an attempt to differentiate them, and enable him to sort-of stand over his sidekick (who Hanna-Barbera production notes identify as Godzilla's cousin). When you think about it, though, it would be dumb to produce a plush two inches high, and kind of screw up the idea of packing them together.

By the way, they did indeed ship together, in a cool counter-top box.  You can see dealer catalogs at the great Plaid Stallions that show you the box, but here is what the header card looked like: 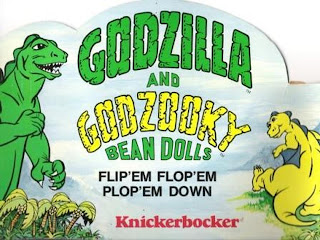 The Godzilla plush is obviously the star of this assortment.  Take note though, if you are looking for one, that he is supposed to have a tongue.  Many times when examples turn up on Ebay, it's missing (somebody didn't want Godzilla to talk, apparently).  The decision to sew a big snake tongue on him is still completely baffling to this day.  It's weird, because the plush looks much better without it, anyway. 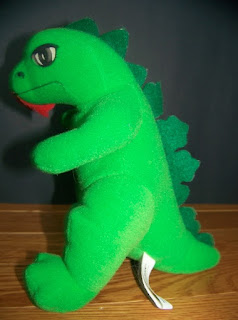 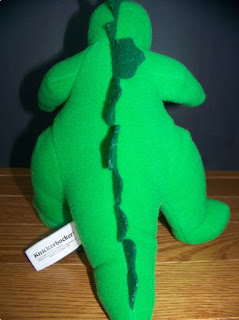 Both plushes have their names stuck to their chests, in a huge font.  This seems like an extremely late-70's thing to do, but I guess even the manufacturers knew that if grandmas brought home the wrong one to a waiting fan, there would most likely be violence. 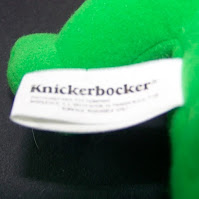 Each plush has a tag, with one side reading "Knickerbocker," and the other showing the character's name again.  These tags are often extremely frayed in well-loved examples. 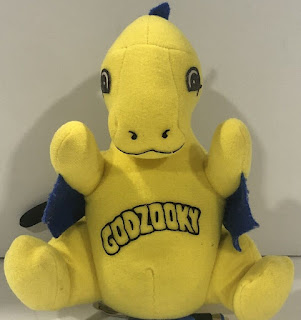 And now, on to Godzooky.  It's fun to joke about him, but in reality, he's just another comic-relief cartoon sidekick, appearing right in the middle of the long lineage of comic-relief cartoon sidekicks that continued for many more years after him.  Listing just the Hanna-Barbera and Filmation comic-relief sidekicks alone would fill and crash this blog, and shut down the Internets.
I mean, honestly ask yourself:  would the show really be better without him? ......yes, yes it would. 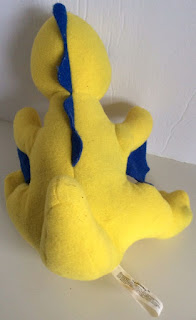 Also, why is Godzooky yellow? (Because he's a coward?) Again, I think it goes back to trying to differentiate between the two characters for the sake of the assortment.  In the show, they are both green...if you look at the header card above, you can see they even tried to make him more yellowish in the artwork.
These days, both of these plushes are becoming pretty rare, and therefore expensive.  The old rule of "nobody bought it at the time" applies with Godzooky, because now, when he does appear, he's a couple hundred bucks (note that this rule will never apply to any Sequel Trilogy merchandise, though; there are exceptions to every rule, after all).  And of course, the other important factor with toys--and especially plushes--is condition, and in the world of stuffed animals, finding nice examples is much harder, because they were played with, slept with, and dragged everywhere.
Come to think of it, when you do see a Godzooky, he's usually in quite nice shape.  Huh.
Posted by Sampoerna Quatrain at 07:45

The Godzilla plush would protect you from danger.
The Godzooky plush would get you into danger.
So it is better to take the Godzilla one with you which will lead to it being in not as pristine condition as Zooky.
Better to have a 30 story tall figure on your side than just someone who is a single story.