Well, cheers to Bandai USA for giving us an American line of Godzilla vinyls, AND keeping them in stores, despite limited availability (in my area, K-Mart, TRU's, and comic shops).  Who ever thought we would have such a line!
In the most recent assortment: a brand new sculpt of King Caesar! The last one that was available was from 1998's "Godzilla Island," and, well, it was really lacking. Take a look: 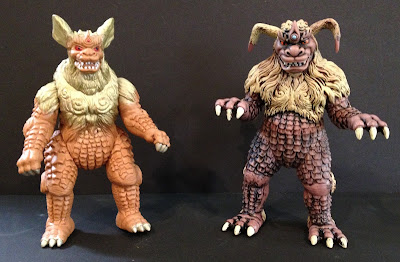 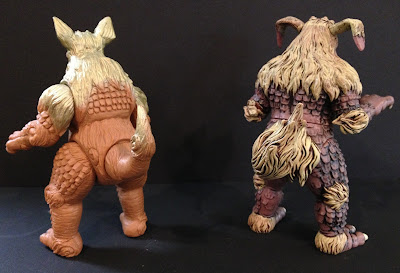 Hard to believe it's even the same character. It's hard to tell from the photo, but the new one's tail, which is articulated, is even correct, going from a thin-to-thick portion that is much more "screen accurate."
Pick this one up if you get the chance, and you won't be disappointed--I would hope that Bandai USA continues with a lesser-used character per assortment...how about a swell Baragon or Gorosaurus?
Posted by Sampoerna Quatrain at 12:35