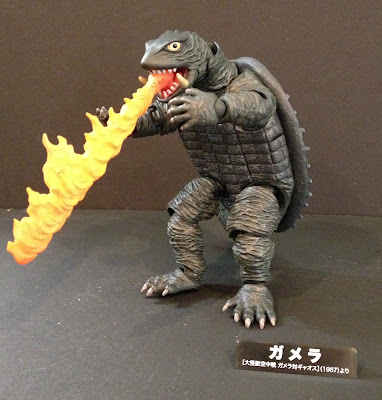 After enjoying all of the Toho characters that Revoltech has made, and as the fan-focus shifts back over to Bandai again (with their awesome SH Monsterarts series), I didn't want to leave Revoltech behind before I went for their classic Gamera.
I have a few various vinyls of Gamera, but nothing as detailed, articulated, and customizable as this.  As expected, Revoltech again knocks it out of the park with this figure.  The detail is amazing, and it looks like the Friend To All Children has walked right out of GAMERA vs. GAOS and onto my shelf.


You forget how thin Gamera is...at least I do, in my mind.  The 90's films made him, well, thicker, or bulkier, but it took me a minute to understand how proportionally correct this figure is.  Also, I started to complain about the limited range-of-motion on his arms and legs, until I realized that is ALSO correct to the original suits! The amazing Revoltech (TM) joints are there, just not allowed to be used to their full potential, but still give more articulation than a vinyl figure.


But wait, this is Revoltech, so there's more! Besides the cool nameplate they always include, and the cool flame jet you have already seen, this figure is TRANSFORMABLE.  Yep, his chest opens, into which you can fold his head...pop off his arms and legs, and swap them for the four included blue jets! They even give you a cover for his folded-in head, and a stand to put him on, so he can be in flying mode.  Heck, I will let the packaging do the talking here: 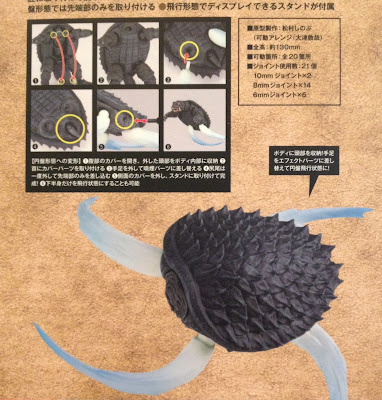 Now, that is Japanese ingenuity at its finest.  Once again, I can heartily recommend this figure, which at the time of this writing, is $50 on Amazon, but much cheaper, even, from their sellers.
Posted by Sampoerna Quatrain at 07:31