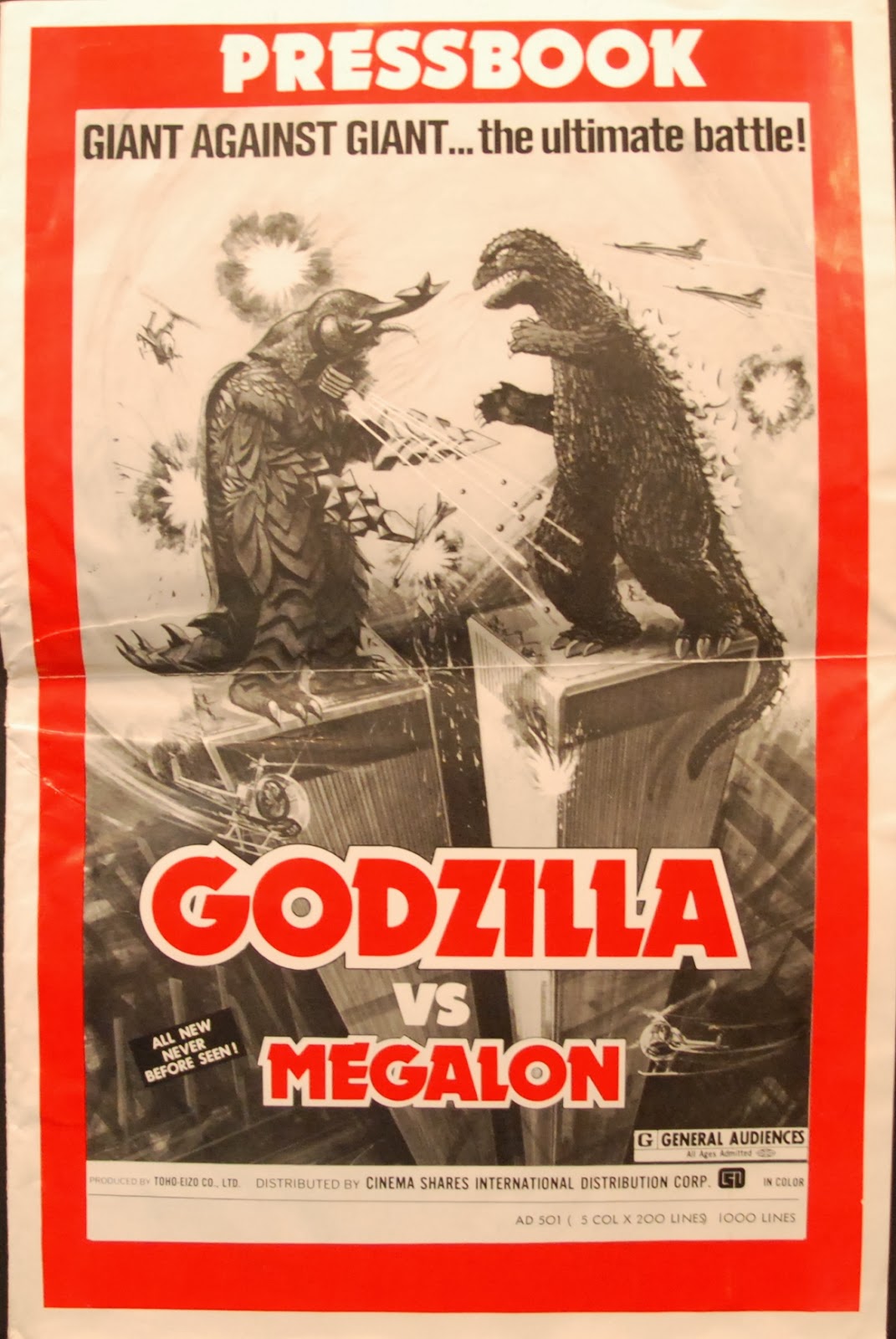 Very cool pressbook for MEGALON that came with a set of ad slicks.  Once again, not only are pressbooks too big to scan, but this one unfolds like a giant tri-fold brochure, making it all the more impossible: 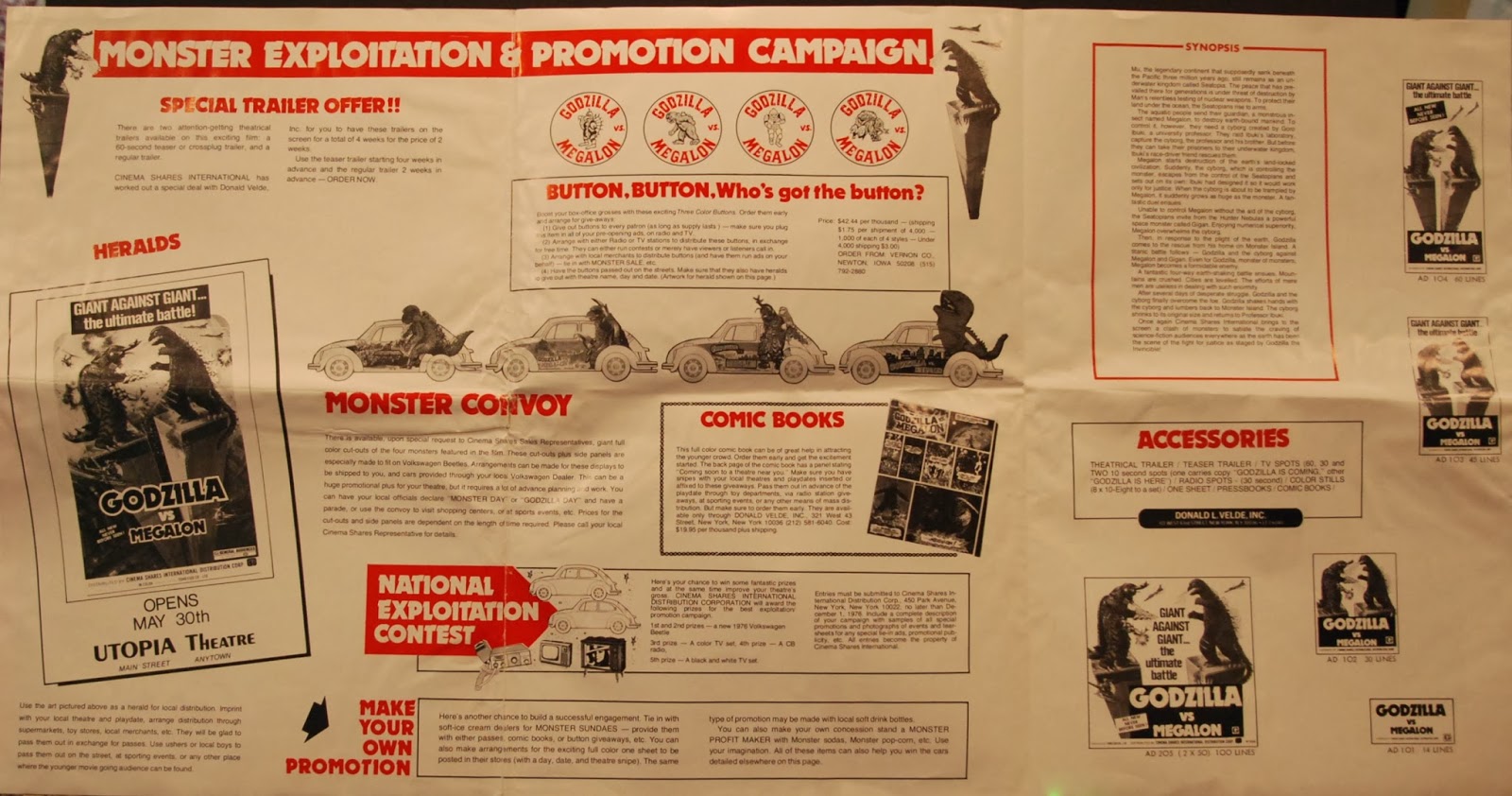 But, we still can look at some of the more interesting parts in detail.  GODZILLA vs MEGALON has to be the Godzilla film with the most marketing materials available...though strangely, all of the ads use the poster art, and are all pretty much the same. 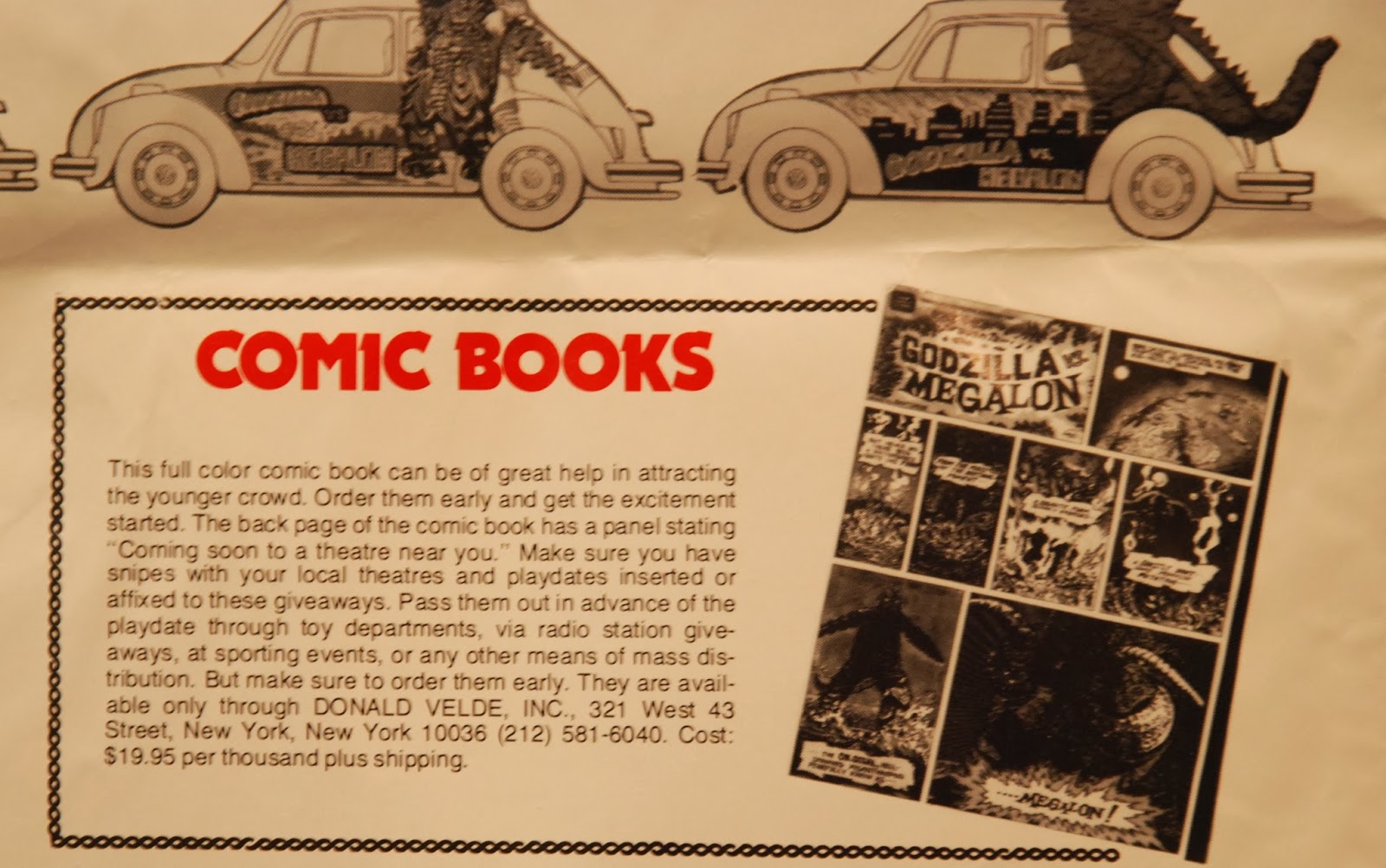 Let's start with the famous 4-page comic book (elsewhere on this very blog).  It is interesting to read that theaters had full leeway of how they used the comics.  It wasn't just a one-time thing, they were allowed to buy however many they wanted to hand out (and not just in the theater, as it says above).  Oh, and they were twenty bucks for A THOUSAND.  Wow!

Tracking down original pressbooks is a way to solve mysteries.  For example, you will notice that there is no mention of LOBBY CARDS in the example above, but that 8 smaller color stills were available.  Also, notice that there were TWO trailers and FOUR TV spots.  Even one radio spot.  My question is this: last year Toho cancelled the version of the domestic MEGALON release that we got on DVD that included extras.  I would love to know if ALL of these were included, and the disc was as complete as the DESTROY ALL MOSNTERS one was.  A few got through, and they are on Ebay occasionally, but "knowing is half the battle".  I have even seen a screen shot of the menu, but it doesn't tell us if all the trailers are there! 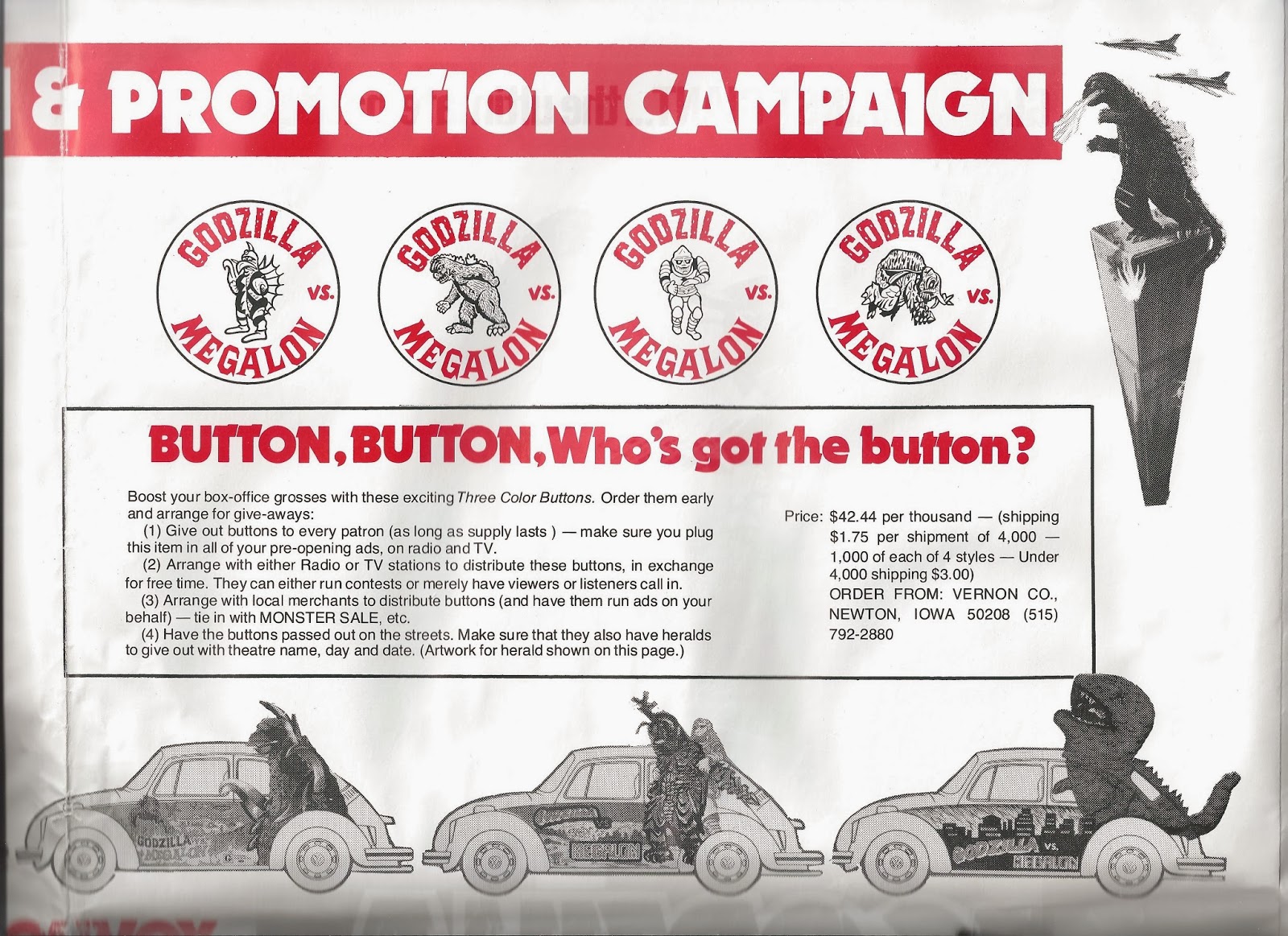 Now we move to the famous buttons (or pins, badges, pinbacks, whatever you prefer to call them).  Interestingly, they were $42.44 for A THOUSAND, which of course we are talking about 1976 money, but still.  I have my set displayed via adhesive magnets, which works very well:

Next we come to another kooky suggestion from the makers of a movie pressbook...a Volkswagen parade: 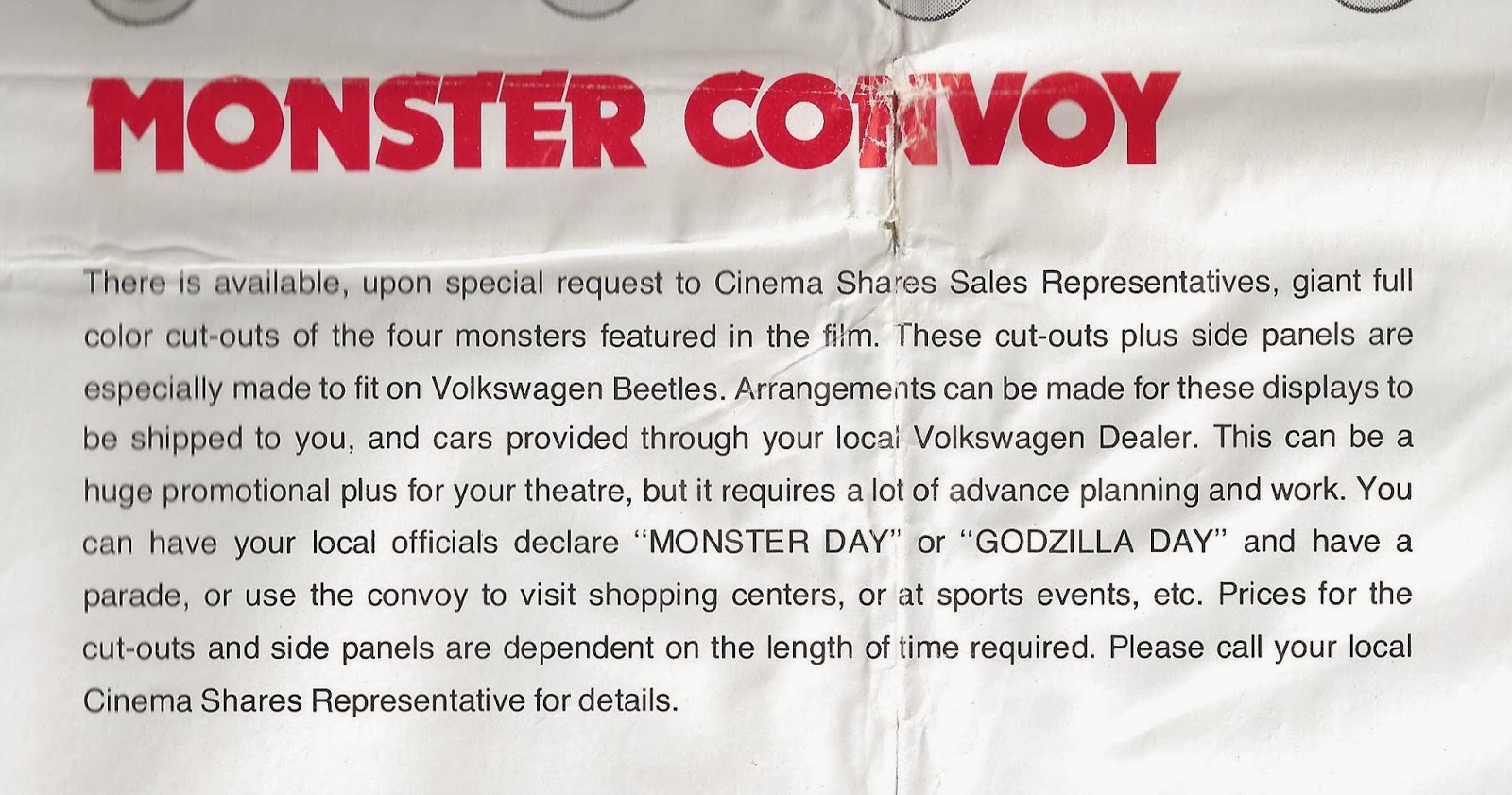 This one is fascinating, and I wonder if this was ever attempted...and if anybody ever actually ordered the cutouts and auto panels that are mentioned...or if they were ever even made!  Why the focus on Beetles (which you just obtain "through your local dealer" of course, I can imagine that phone call)?  Sure, they were incredibly common, but I guess they wanted to produce only one shape of auto artwork.
Can you just picture that parade?

Lastly, we have an incredible SWEEPSTAKES that was running for the "best exploitation campaign."  You will be shocked to know that the prize was a 1976 Beetle (AGAIN WITH BEETLES).  But, you could also win a CB Radio or a Black & White Television set! Woo-hooo!

Here is the plot synopsis for the film...usually these say NOT FOR REPRINTING, which it doesn't this time, but you will also notice that NOWHERE in the entire document is Jet Jaguar referred to by  name.  Here, he is only THE CYBORG (??), and in the promotional comic, of course, he is ROBOTMAN.  Apparently there was some confusion over what he was going to be called in America, and they left themselves room to maneuver...although I can't imagine him called anything but JET JAGUAR. 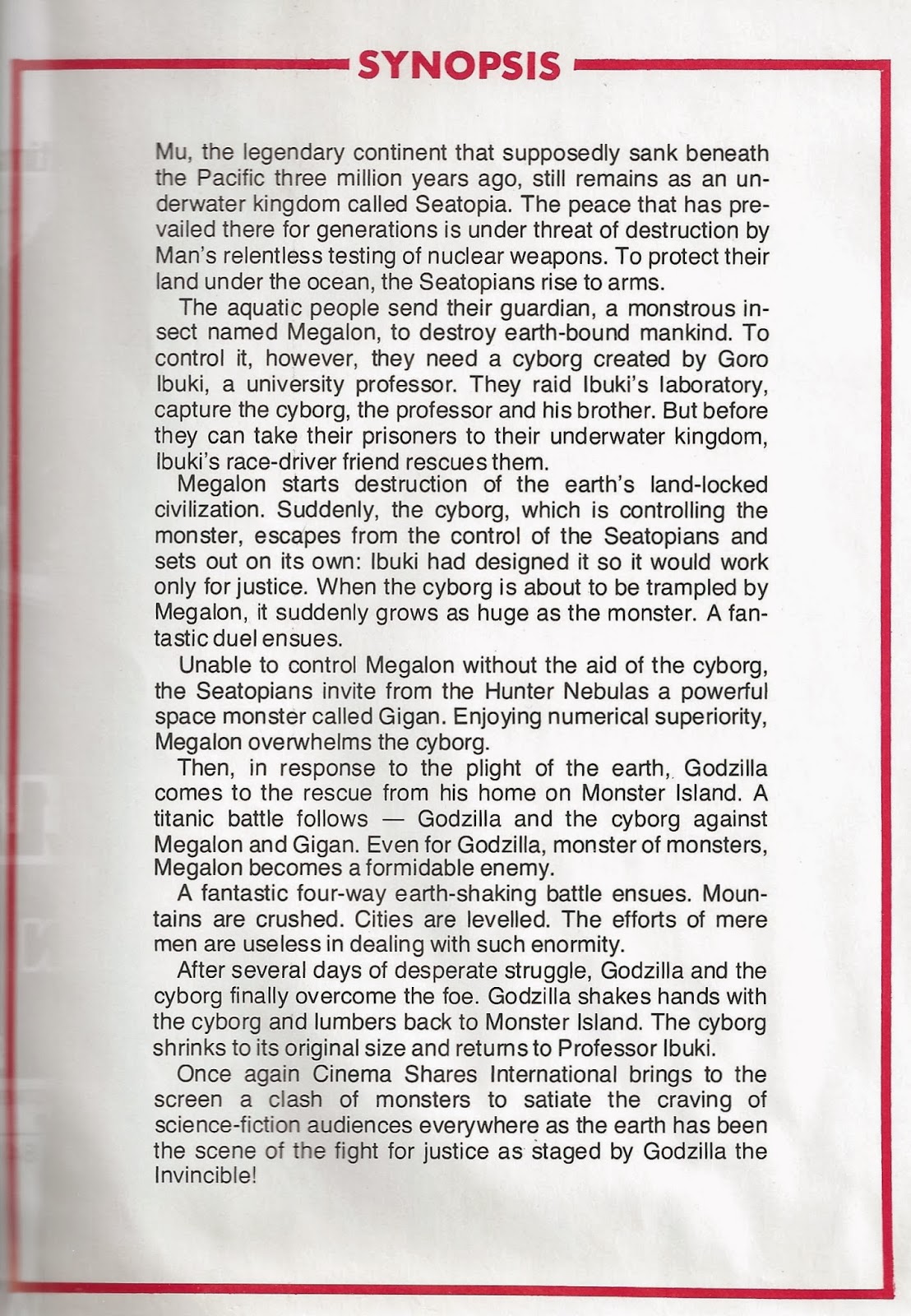 Posted by Sampoerna Quatrain at 09:16

Interestingly enough, in the first Japanese posters for this movie, Jet Jaguar was called Red Alone (レッド
アローン). So I guess they didn't know what to call him on two continents.