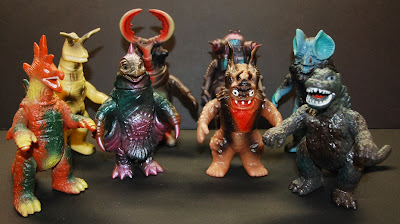 1978 was a good year for Godzilla in America!There was a Saturday morning cartoon, a Marvel comic, and a handful of American products in toy stores, if you knew where to look!
One of these products was a line of figures randomly-licensed from Popy in Japan, and sold by Mattel under the name GODZILLA'S GANG...the irony, though, was that none of the other kaiju in the line had anything to do with Godzilla! Luckily, they are all Ultraman monsters, so let's look at them in detail, and see exactly where they came from. 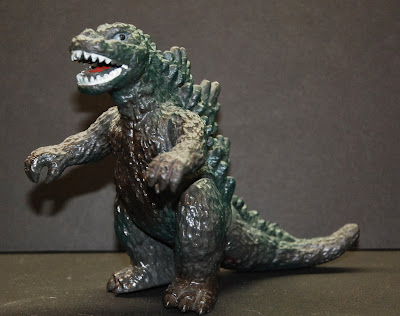 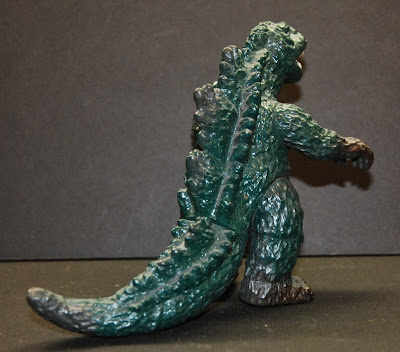 The Popy Godzilla is the star of the line, and is pretty awesome to behold.  Not only have all of these figures become more expensive in recent years, but Godzilla is going for STUPID prices on E-bay these days...now, I grant you, sometimes the auctions are just started high, but he continues to command around $90 when last I checked! 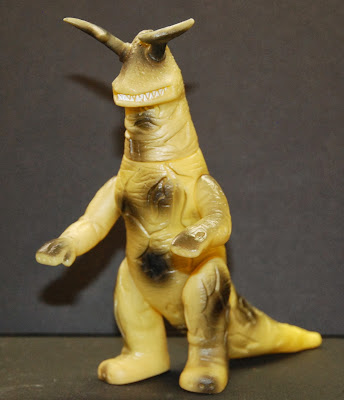 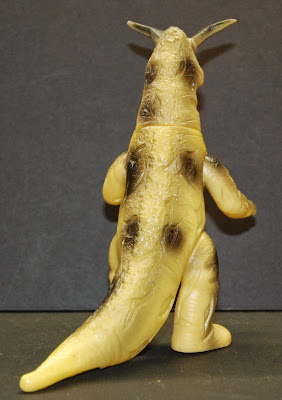 Beloved to children of Japan, Eleking is one of the most recognizable Ultra-foes, making a memorable first appearance in ULTRASEVEN, episode 3, and several appearances since.  Also, in my opinion, an inspiration to the character of Pikachu! 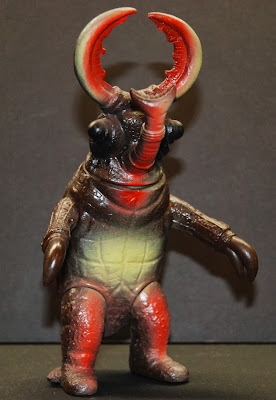 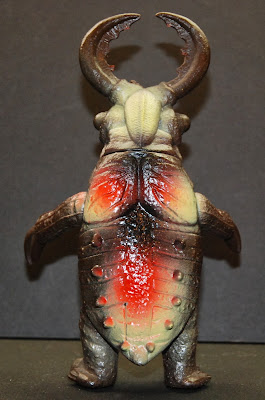 This cool-looking guy is Noko-Girin, an Ultraman Jack enemy who appeared in RETURN OF ULTRAMAN, episode 26.  I love the sculpt on this figure. 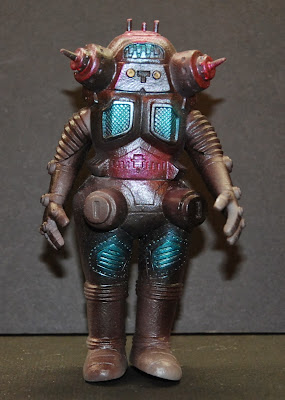 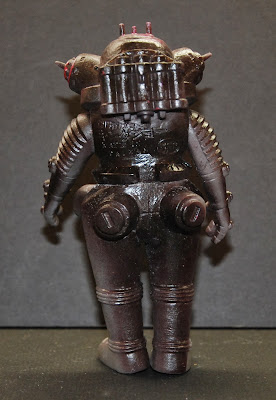 Another awesome combatant for Ultraseven, King Joe was first seen in episode 14, and returned in various incarnations since then. 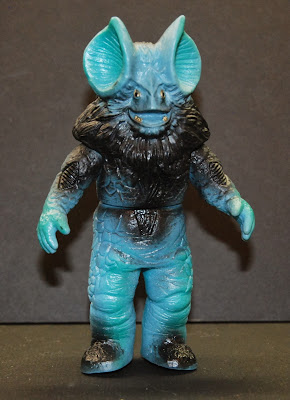 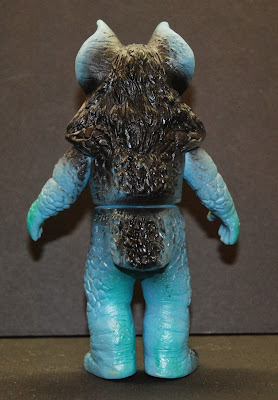 These days, you usually see this alien called Icarus, (or Icarasu Planeter in Mattel's packaging) and he first appeared in ULTRASEVEN episode 10.  While not my favorite kaiju design, he has gotten some more screen time recently on the new GINGA show. 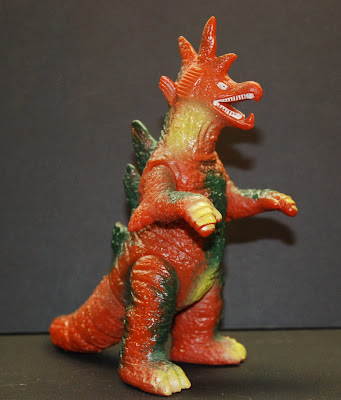 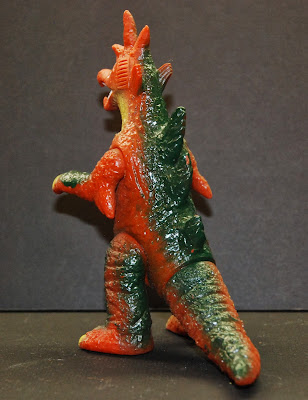 One of my complaints with Titanosaurus (in TERROR OF MECHAGODZILLA) was that he just seemed like a generic Ultraman monster, and a good example of this is this guy, Muruchi, who fought Ultraman Jack in RETURN OF ULTRAMAN episode 33. 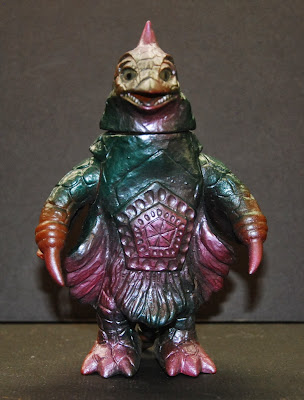 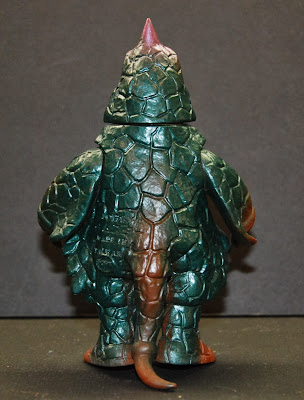 Bemstar, however, is a different story.  Called by his Japanese name of Bemustar by Mattel, he first appeared in RETURN OF ULTRAMAN episode 18, and has returned several times since then.  Yes, his design might be a bit absurd...but when his starfish-like stomach engulfed an entire space station and killed everyone inside, it became a permanent part of my memory! 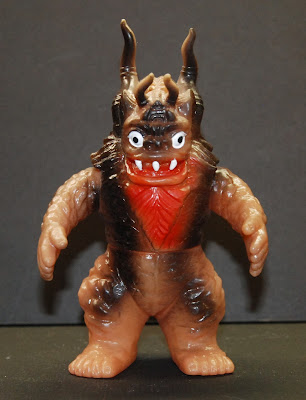 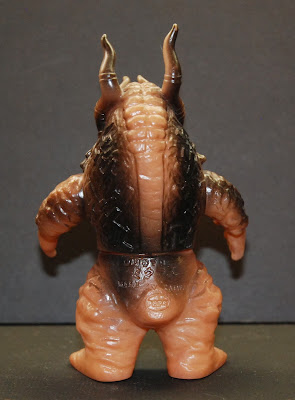 And then there is "Capsule Monster" and trusty sidekick Miclas, who is sort of the Angilas to Ultraseven...and also like Angilas, he doesn't get used enough.  Called MICROS by Mattel in at least one place, he also first appeared in ULTRASEVEN episode 3 (Eleking's initial outing).  Fun fact:  There is actually an argument at my house on whether he is cute or not! What side do I come down on? Well, let me put it like this: the word "adorable" is not in my lexicon, but I think he's adorable!


All in all, GODZILLA'S GANG was a very unusual toy line, and the type we simply won't see again.  If you get the chance to pick up any of these rapidly-valuing figures, I'd recommend it, while you still can.
Posted by Sampoerna Quatrain at 08:09

One of these products was a line of figures randomly-licensed from Popy in Japan, and sold by Mattel under the name GODZILLA'S GANG...the irony, though, was that none of the other kaiju in the line had anything to do with Godzilla!

Very good point! Also, there was giant Rodan, but technically it was in its own line ("World's Greatest Monsters"), even though lots of people try to count it with the Shogun Warrior line!

Thank you so much for this post! Excellent -perfect really-- information about "Godzilla's Gang." So much fun. I really love these figures from the Popy "King Zaurus" series. Real works of pop-art that are fun to track down, own and display.

So true! Mine are now in a place of honor, in a glass case!
Thanks for the kind words!!

I lived in Japan from 1966-1968 as a child (age 2-4) and have a number of figures that I'd like you to see which were purchased in that time. I've identified some but not all of them. They'd been boxed up in my Mom's basement for the last 40+ years. Some are missing parts but most aren't in bad shape. Here's a link to the photo: https://goo.gl/photos/664UANBk32CLWUJN6

Wow, thank you for sharing, Alan! I can help you with all but one. From left to right: Godola (an enemy alien from Ultraseven); Guilala (from his own movie, which is called THE X FROM OUTER SPACE in the USA); the third one I don't know; Ultraseven (which was the current Ultra show when you lived there!); Minya (or Minilla, Son of Godzilla); Eleking (also from Ultraseven); Icarus (another enemy from Ultraseven); Windom (an occasional helper to Ultraseven), and Mephilas (a shape-changing enemy alien from Ultraseven). You have quite a treasure trove there of vintage Japanese vinyl treasures! I am not quite smart enough to help you with the individual makes, such as Bullmark, Popy, or Marusan (as to which is which), but searching with these names + manufacturers should help you!

Thank you so much for the information, I really appreciate it. My mother says I was obsessed with ultraseven when we lived there but I called him seven-oh. That's what I still call him. Armed with this new information I can dig a little deeper. Thanks Again!

They are all Marusan. I still haven't been able to find the mystery figure, one foot is stamped 1966.

I've identified the mystery figure as Antora from Ultraman episode 7: The Blue Stone of Vallarge, 1966.

You're very welcome! Glad to be of help. Love the story about you calling him "Seven-Oh!"