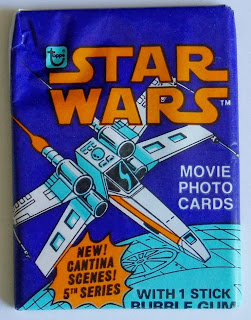 Topps' SW card set concluded with the fifth series, also called the "Orange" one.  Not only is a great deal of the set made up of "behind-the-scenes" photos at last, but for the first time, Cantina aliens are finally shown...even Topps was aware of the omission up to this point, as you can see from the front of the wrapper.
I went into this in the book I wrote on the Cantina scene, but it's my belief that Lucas was a little less than satisfied with the completed scene, and, despite bolstering the scene with further shots and masks before the film was released, remained a bit "shy" when it came to the sequence.  As a result, there was an "embargo" on much of anything pertaining to the Cantina over the first year of the film's existence.  This is strange to me, because I was one of an entire generation of kids that was completely mystified by the scene, and left the theater with it firmly in my mind for all time.


Posted by Sampoerna Quatrain at 16:39