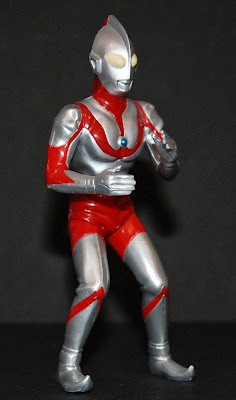 It's hard to believe it's been as long as it has, but in the early days of Ebay (which is probably where I got this), I was desperate to track down an actual action figure of Ultraman.  I found this one, which was new at the time.  It's made by Yutaka and came out in 1997. 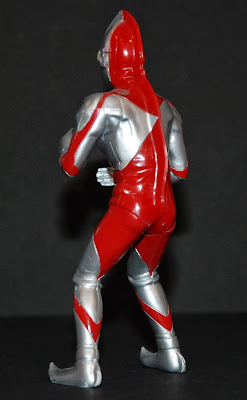 I was pretty thrilled at the time, and as you can see, it's a very good-looking figure.  The problem is, like a supermodel, it doesn't do much, other than stand there and look good.  Both the sculpt and the paint are very nicely done, but the figure is only about 5" high, and the articulation leaves a lot to be desired.  The legs swivel--not bend--so you can't do much other than point his toes, which by the way are a bit too curled for me, and reminds me more of the "evil Ultraman" from the first series.  The arms move, but since he is already in his "fighting stance," you are somewhat limited there as well. His head doesn't even turn.  Action figure technology has come a long way in my lifetime, and especially since 1997..in the next few days, we will see exactly how much. 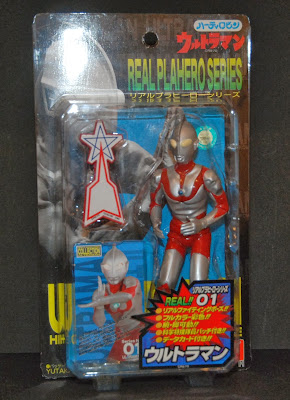 As if to make up for the limited playability, if that is a word, of this figure, the manufacturers include a Science Patrol badge, and a tiny trading card that is about half the size of a standard trading card.  And unlike a lot of American action figures, he can easily be repackaged because the backing card slides off of the bubble, so points for that.
And speaking of the card, it is good for a snicker with its pseudo-Engrish slogan.  I do think that somehow it is meant to evoke the catch-phrase that was used on the ULTRAMAN 80 show, "He came to us from the sky," but it's still funny. 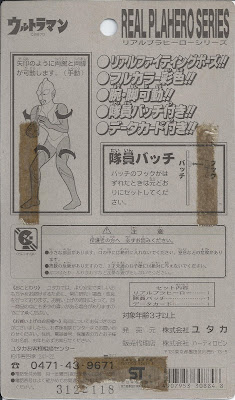 The back of the card doesn't give us English speakers very much to go on.  There are instructions on how to move the four articulated parts, as if you need them.
Today we have things like Bandai's "S.H. Monsterarts" and "Ultra Act," which offer amazing sculpts and 1,000 (or so) points of articulation, and only cost as much as the average human kidney.  We will be looking at some of these shortly (the figures, not kidneys, because that would be gross).  As a spoiler, look at how the 1997 Ultraman is dwarfed by the Ultra Act one: 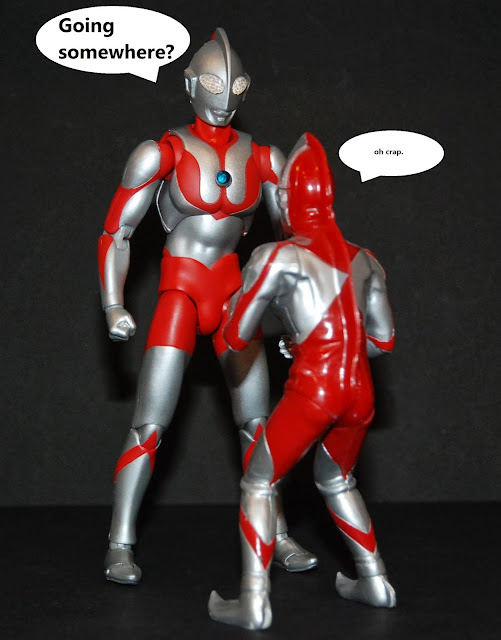 Posted by Sampoerna Quatrain at 12:37