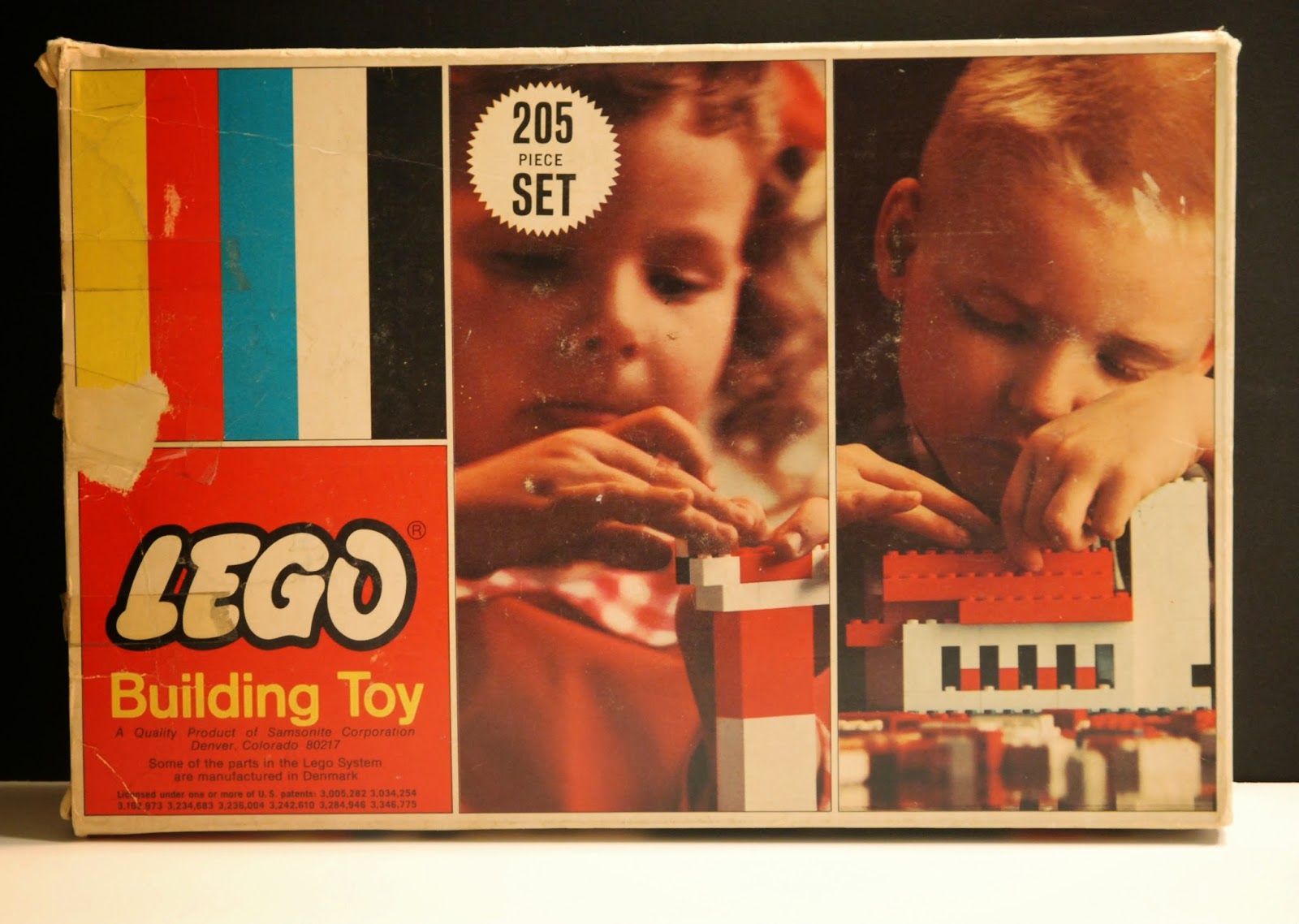 A sweet flea market-find from this weekend! A boxed, vintage Lego set called "Beginner Set" from 1966!  Not only is 205 the set number, but also the part count. 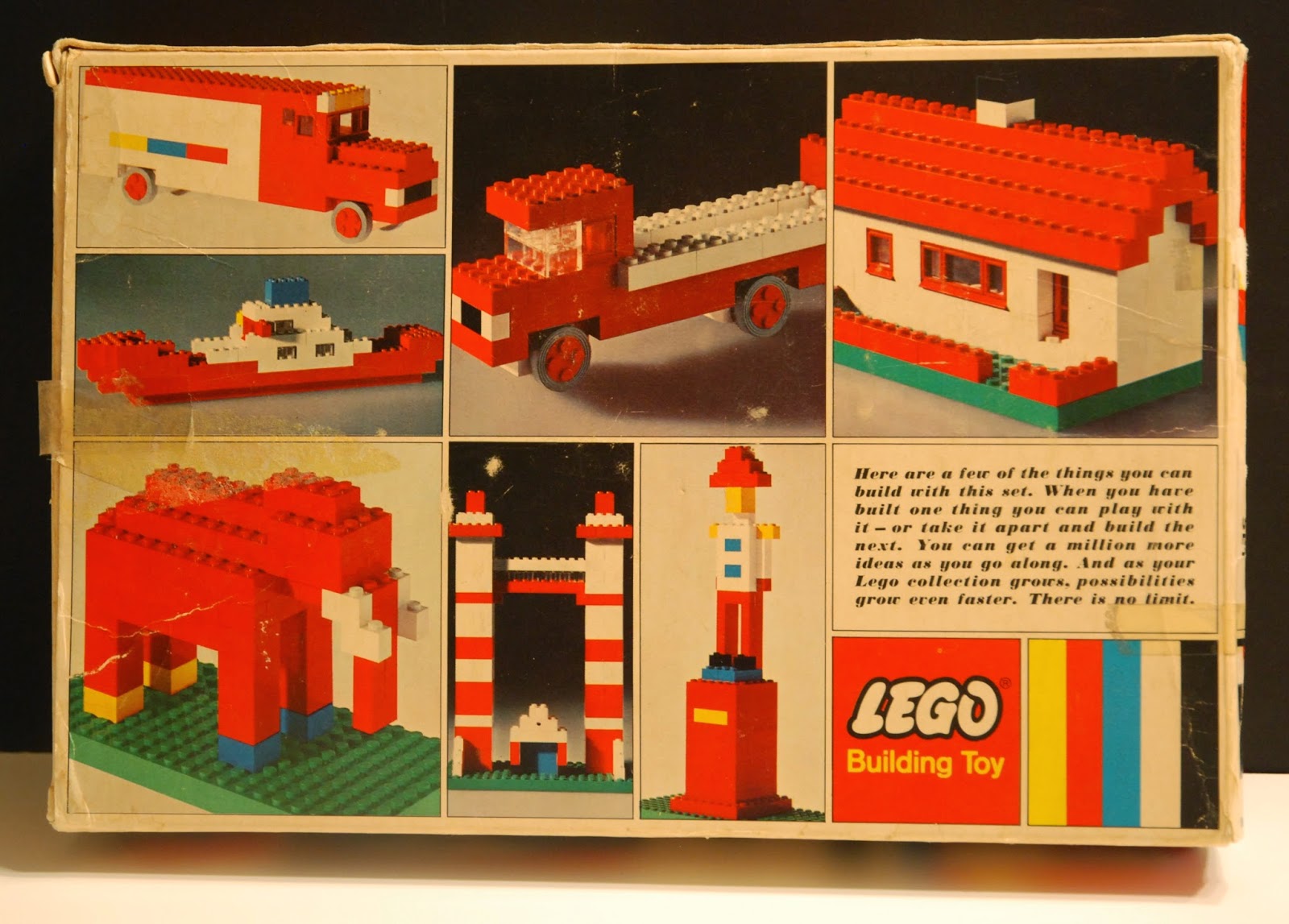 And, I learned something.  For 9 years, Lego was actually a Samsonite product in the United States.  That's Samsonite, as in the luggage makers! There was a distribution deal from 1963-1972 that allowed Samsonite to sell Lego in America, and it grew so much that Samsonite even had to build another plant, in Colorado, in 1965 to meet demand.  While they imported some unusual pieces, they actually manufactured bricks in the USA.  You can see the Samsonite information below: 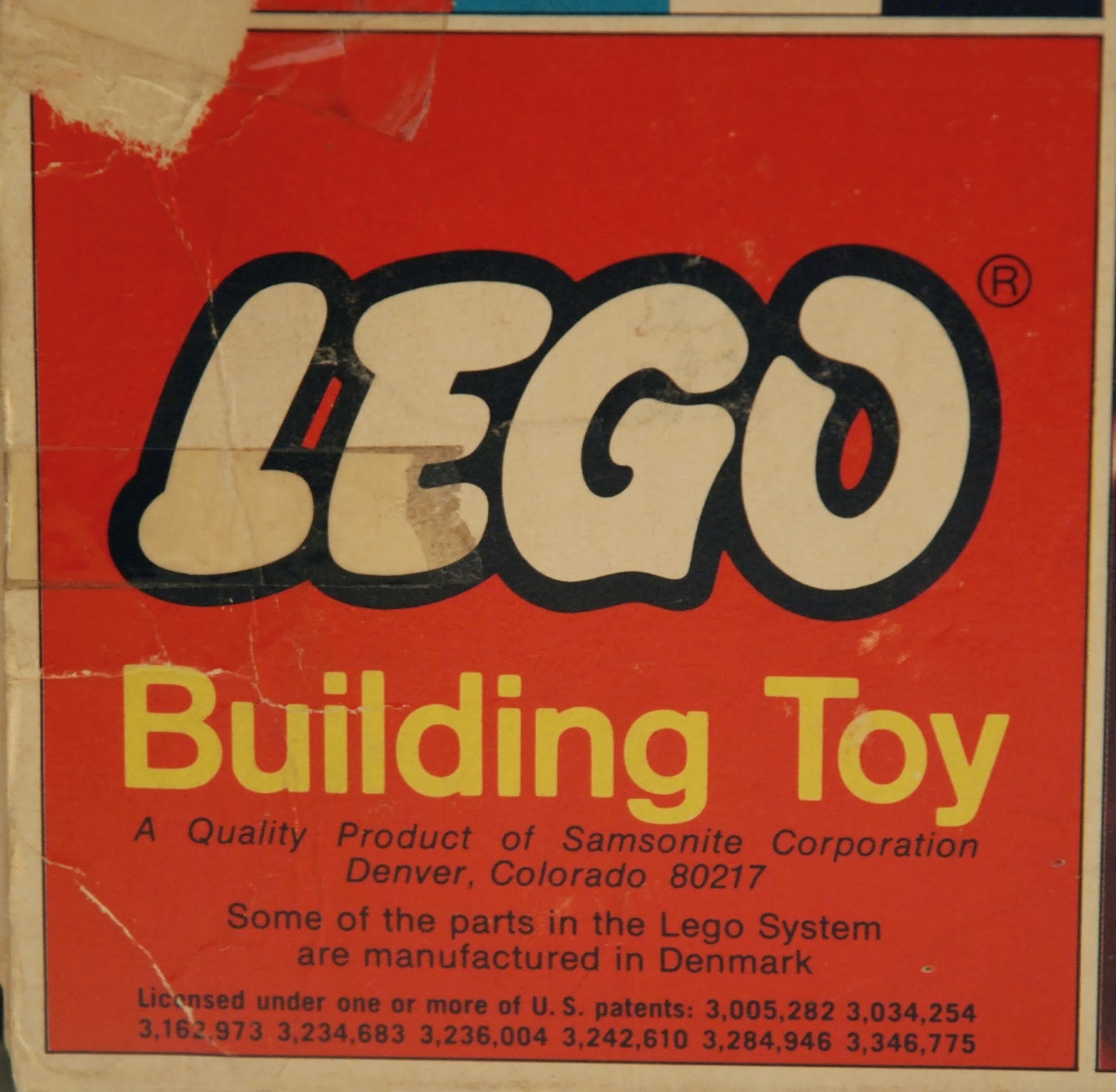 Of course, this was a time long before minifigures, which they wouldn't begin to evolve until the later 1970's.  Instead, this 205-piece set was for general building and creativity (except that the boy on the front of the box looks like he has just dozed off while building). 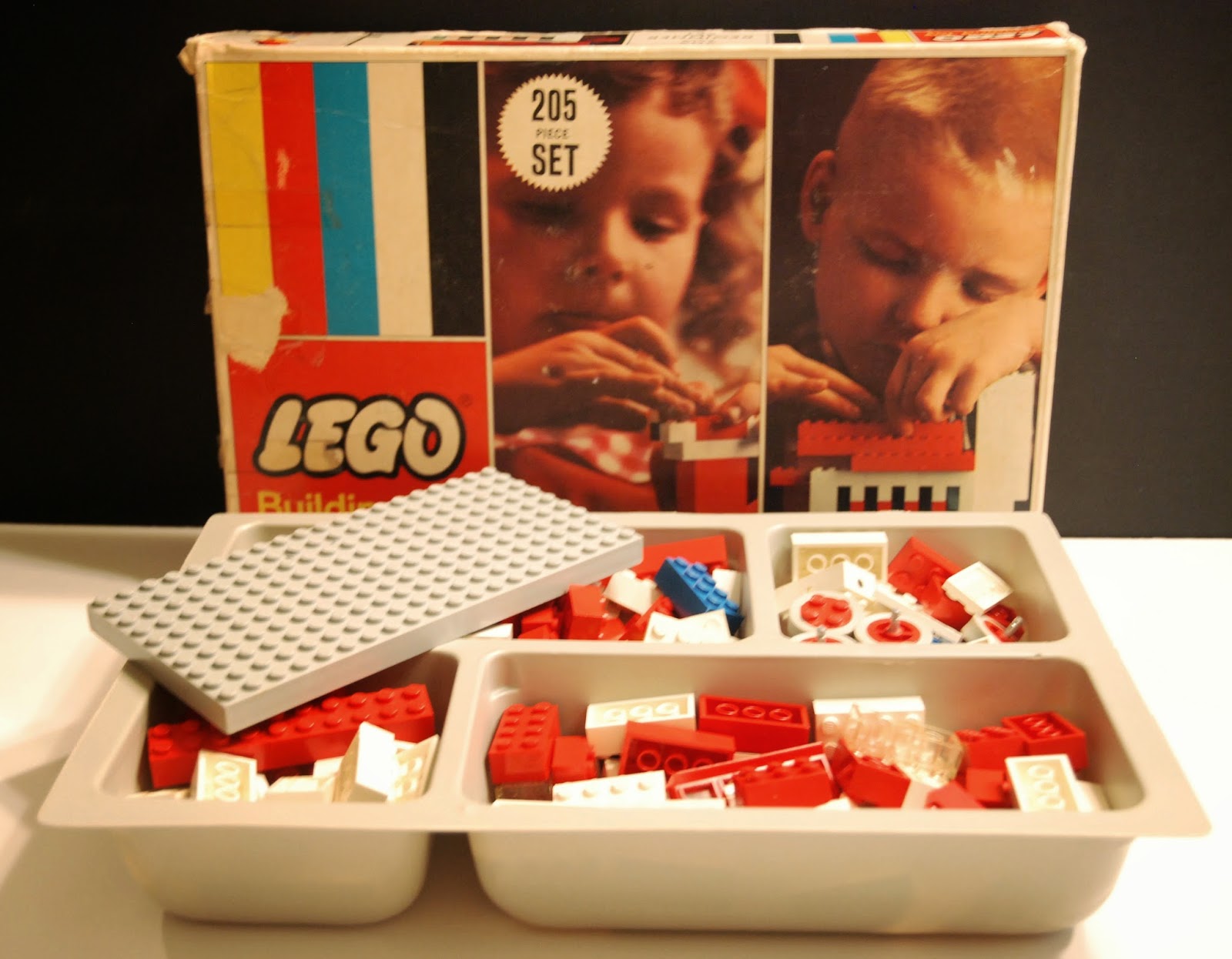 There are some interesting differences between these vintage bricks and their modern counterparts.  The first thing I noticed was that the plastic was different, which is to be expected, as the ingredients have changed over time.  Also, a wide "baseplate" is included, but not how we think of them today.  It's just an extremely wide brick, made to be used as a foundation for a house, or something similar.  Strangely, it's hollow on the bottom, where today, it would be completely interlockable, which may not be a word...but for one thing, this old design is a much weaker one:

Next, take a look at these vintage window designs:

Lastly, this was the most unusual difference I noticed.  Not only are the wheels (or "tyres") different, but they also have metal pins to connect them.  The bricks they are designed to connect to are very strange, with a clear lower piece along the bottom.  This both serves to contain the locking mechanism, but more importantly, maintains that they will interlock with other bricks, which is really clever. 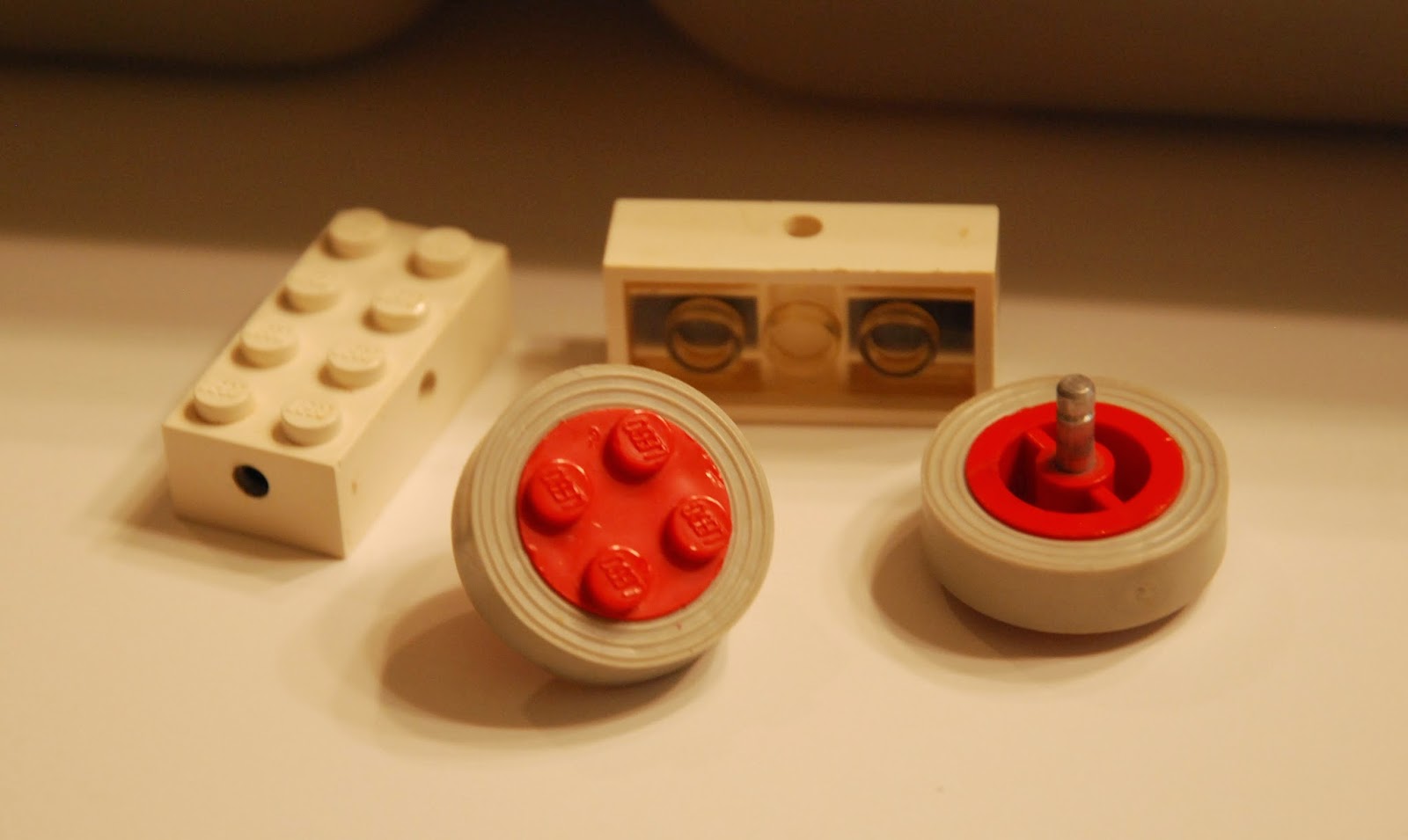 I was thrilled to find such a vintage set to add to my Lego collection, and it will be displayed and treasured.  I also read that the set originally sold for an astounding $4.95, which is staggering....but take a look at the price tag on mine: $3.45! 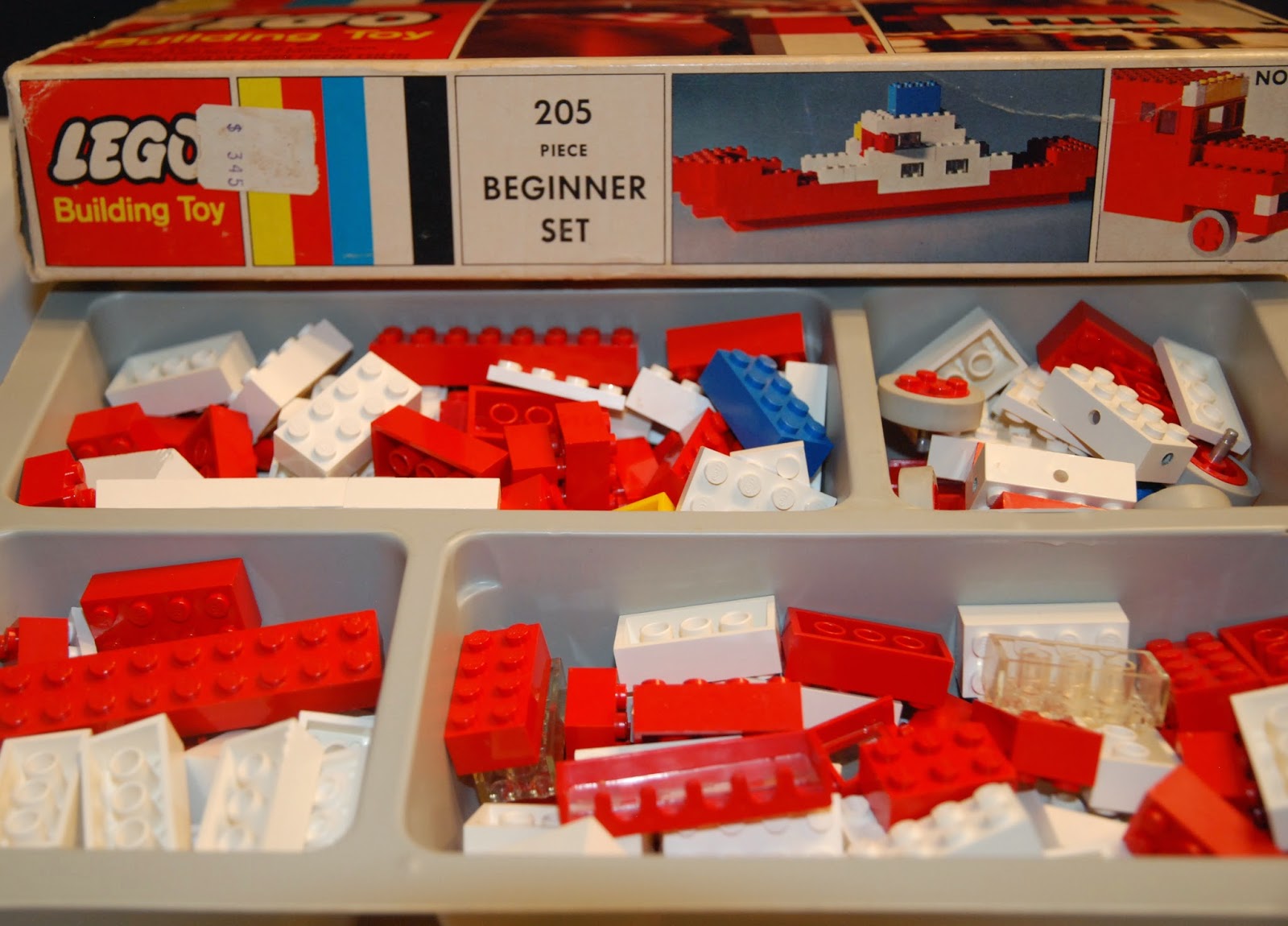 Posted by Sampoerna Quatrain at 08:42

That's Samsonite, as in the luggage makers! There was a distribution deal from 1963-1972 that allowed Samsonite to sell Lego in America, and it grew so much that Samsonite even had to build another plant, in Colorado, in 1965 to meet demand. While they imported some unusual pieces, they actually manufactured bricks in the USA. You can see the Samsonite information below:

That is rather fascinating in some ways, but I suppose it made sense if Lego themselves didn't feel they had the clout to set up a workable US subsidiary just yet to import/manufacture their own products for the US market just yet.

I suppose after '72 they finally had one set up (of course not before having opened it's own theme park dedicated to it's craft back home).
https://www.youtube.com/watch?v=KVNN6XOgQ94

it's a late question, but i have that box new, the blocks are still plastic sealed with booklets inside the box is in a good shape and the set is brand new.
Wonder where and how much i could sell it ?

Sealed definitely makes it more valuable. Here is a website to see what Lego parts and sets sell for:

If that link doesn't work for some reason, you want to search the Catalog for set #205, and it will show you prices--in the last 6 months, this set hasn't been sold (especially sealed), but sellers currently have sets listed in 'New' condition for between $239 & $350. I'd put it on Ebay and let it ride..!

LEGO licensed Samsonite to produce sets in the USA from 1961-72, and Canada from 1962-88. The first LEGO was produced at the Stratford Ontario Samsonite plant, which produced it for both USA and Canada. Starting in 1965 Samsonite opened a USA plant in Loveland Colorado (near Denver). By 1970 LEGO decided that USA Samsonite was underperforming, and took legal action to revoke the USA Samsonite license by 1973.