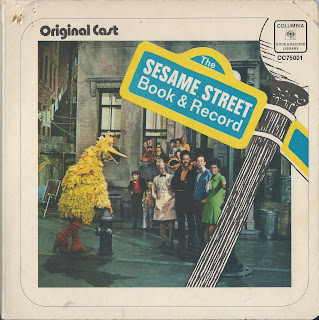 Today, we start a 5-part journey, sharing an amazing and historical stash I recently picked up.  We have talked about early Sesame Street a few times, but now we can really experience it.  It's funny, because I was a "second-generation" SS watcher, in the mid-to-late 70's, and I never knew as a kid that the show had experienced an earlier incarnation, because most traces of its genesis were gone by the time I started watching (and the earlier clips they could use didn't really mess up any continuity).  We have discussed before about when Oscar was orange, but there are more oddities, such as a Bullwinkle-ish Big Bird, the completely different Gordon, the "Anything People" and so on!


The first Sesame Street LP was released in 1970, and songs from it were used as "singles" on Columbia Records, the earliest nine or so being in the form of "book & record sets."  These weren't exactly "read-along" books, but instead supplemental information included to enhance a child's enjoyment of the songs.  They were very much like early "board books" and were printed on heavy cardboard.  Unfortunately, they weren't coated, like today's board books are, so they are a little more prone to yellowing and preschool mayhem.

And, oh, the artwork.  It has that delightful feeling of the time when the show was finding its feet, and establishing what we would today call a "brand."  Some of it is downright psychedelic!  Let's begin: 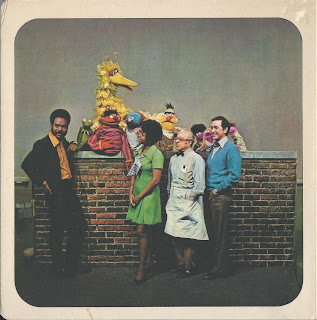 Of course, the A-side of the first record is the original, first-season theme, followed by a B-side track called "Hello," where the main characters all introduce themselves.  This was pretty smart, and the first photo inside the book is meant to illustrate that track.  Strangely, it isn't a very well-set-up shot, and looks more like an outtake or behind-the-scenes photo. 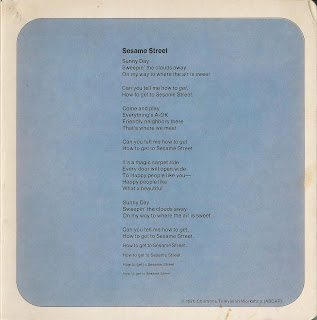 The next page gives us the lyrics to the theme song, with shrinking fonts to illustrate the fade out. 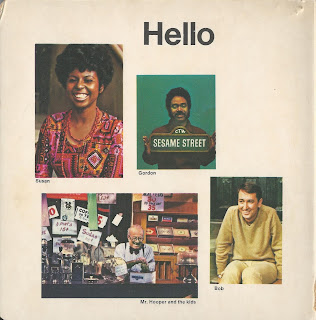 Next up is a two-page spread, illustrating the "Hello" track, in case you have no idea who is who.
Now dig this: 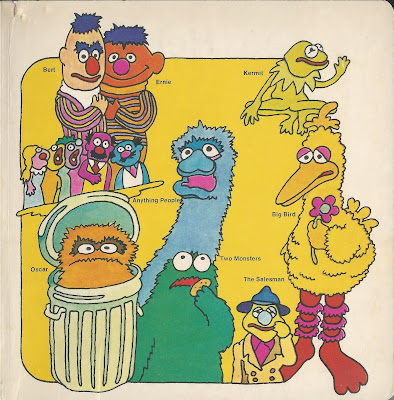 I could stare at this all day.  This is sublime.  Melty Kermit, unsure-about-his-mortality Big Bird, Orange Oscar, Cookie Monster (who as we shall see, is much more emotional)...it just keeps going. 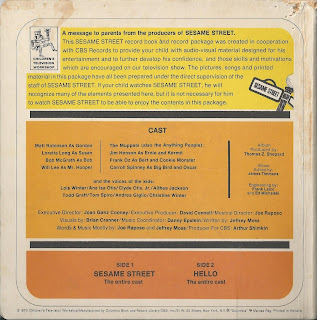 The books are short, and this is the back.  The included 45 has no slot to go into, so it just sort of sits inside the book, and has the same cover art as the front and back of the book: 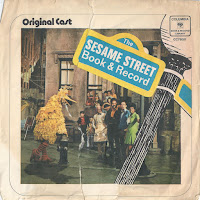 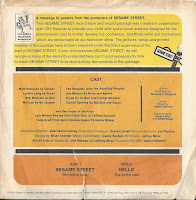 As you can see, the paper sleeves took much more damage than the books.  Yes, in the 1970's, they gave little kids records, and expected us to take care of them.  Most didn't.
And now to the songs! 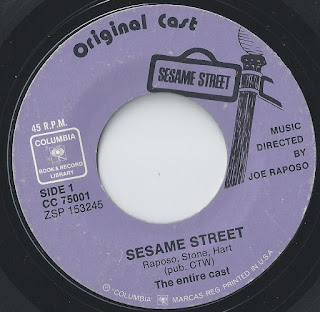 Before "Sesame Street Records" was its own label, these early 45's just used Columbia labels of different colors, with the famous street sign to one side. 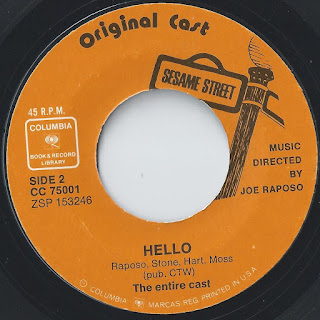 In some cases, these early songs were different, or longer, than their LP counterparts, and if you see a song that is familiar to you from later dates, then this version is entirely different, with different instrumentation.  In the cases where characters evolved, like Big Bird, our early version of "ABC-DEF-GHI" is a world apart from later ones.

Originally, I was going to do a Monday-Friday week of this, but since it's Friday and we all deserve it, let's start now:

P.S. - I was able to work some magic with these, and I'm really happy with the results.  Whereas often kid records are tinny and have lots of high end (and middle), these sound really good! Please enjoy!
Posted by Sampoerna Quatrain at 07:40

Thanks,
I like in "Hello" that Bob says that he teaches shop class, Susan says she's a nurse, and Gordon "teaches school" with Bob.
Also, Susan says that should change out her work clothes before going to Mr. Hooper's but at the end they all just start shouting like a mob and immediately head there.
PS - It looks like Mr. Hooper sells cigars on one side of the store and a soda jerk on the other. What kid doesn't love a fat stogie along with a malted milkshake?

I thought it was fascinating that they had "jobs," because except for Mr. Hooper (and later Luis, of Fix-It Shop fame), we never had any clues!
I didn't notice the cigars however...but of course, at that time, if you were having brain surgery, there was a good chance that the surgeon was leaning over your exposed head, smoking. There's a thought!