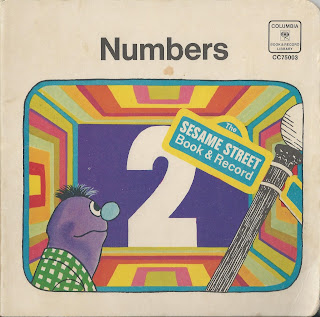 After Letters, the next logical subject for a Sesame Street record is Numbers.  First off, it's hard to get started without stopping to admire the trippy color-work on the front of the book.  The Muppet pictured has almost wandered into Yellow Submarine territory here.  It's beautiful. 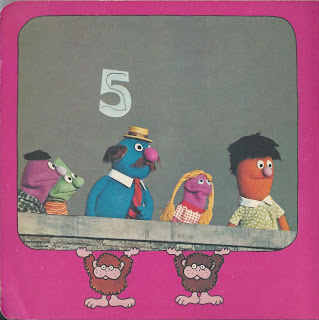 The A-side contains two--count them--two, songs, which will probably be familiar to you.  "Number 5" (with a co-writing credit to Jim Henson) was a "variable" sort of song that they were able to use for different numbers, just like the slightly later (and more famous) "Pinball" number song (that was actually sung by the Pointer Sisters, for you trivia-seekers).  The number in question would be illustrated with animation, and then the examples would usually be shown in live-action snippets--here the items are horns, dogs and coconuts, but another version (I believe it was for "10," and not the Bo Derek movie) featured Jim Henson tumbling down the stairs and losing control of a stack of pies. 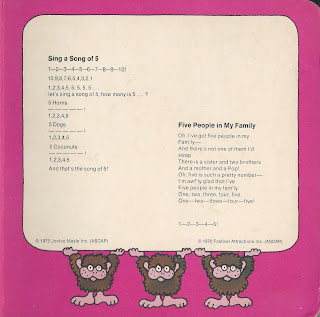 Here, though, the first page is meant to illustrate the second song, "Five People In My Family," by using a group of Muppets that, early on, were referred to as the "Anything People," probably because they could be used to represent, well, anything. 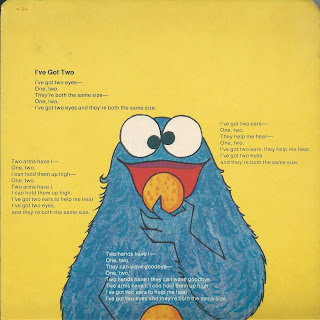 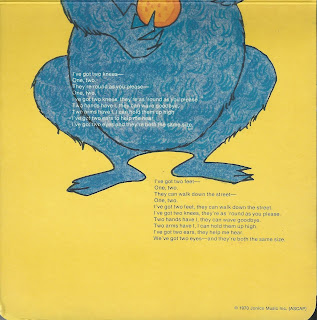 Moving on, the next two pages are printed sideways, forming a sort of "centerfold" picture of some very stylized and charming artwork of Cookie Monster.  "I've Got Two" was sung by Bob, and I have to admit, he grates on me a bit.  He was huge in Japan, though.  He reminds us repeatedly that he's "got two eyes, and they're both the same size," and I want to remind him that many people, including most cartoon characters, aren't so lucky...so enjoy your orbital verisimilitude, Bob. 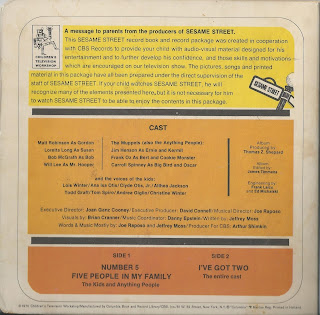 The 45 portion of this set did not include the sleeve, which would have been identical to the front and back of the book.  Here are the labels: 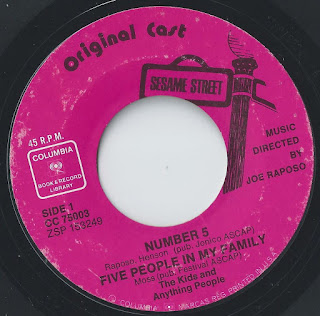 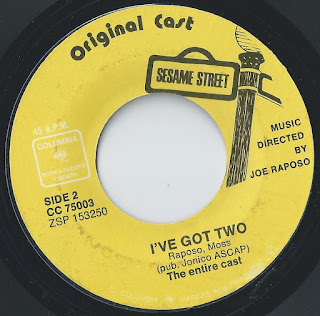 NOTE: Links for all five have been combined and moved to Part Five, so see there!
Posted by Sampoerna Quatrain at 08:27

Jim Henson dubbed the baker's voice, but it was actually stuntman Alex Stevens who played the baker falling down the stairs.