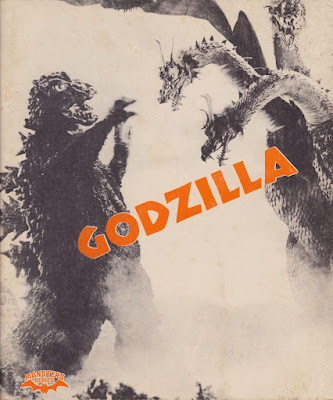 It's hard to believe, but in the years this blog has been around, we haven't yet covered this important (even crucial) item on the list of vintage American Godzilla collectibles.  The timing is providential though, because I just added the "grail" version of this book to my own collection, which we will see better in Part Two, where we will look at variants!

The Crestwood House Monster Series began as a set of six books that were available to elementary schools in 1977.  The first books came in a boxed "Monster Reading Center" that included softcover copies of the titles, a teacher's guide, audio cassettes, and bookmarks for the class. 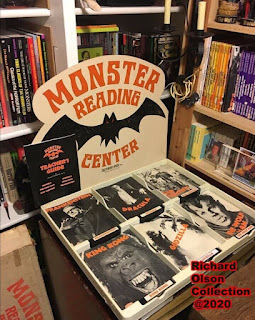 Here is an uber-rare example of one of the "refill packs" for the classroom reading center!
Were you surprised to read the words audio cassettes in the last paragraph? Lots of fans don't even know they exist, and apparently they were only made for the first six books.  (If you would like to hear one, don't miss the Bibliography section of links, below!)
Promotional posters were also offered for teachers to put in their classrooms.  Two of them include Godzilla (via his book cover):  the very early Dracula poster seen below, and the Mummy poster, issued when the series included 10 books.
Posted by Sampoerna Quatrain at 12:43