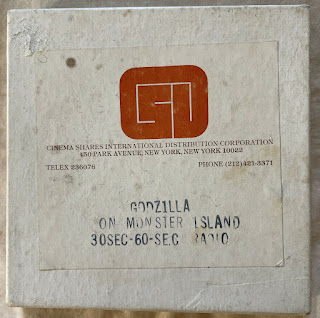 We are proud to unveil yet another Sphinx exclusive (and also a little disappointed; we will get to that in a minute) that can't be found anywhere else! The contents of a 5-inch reel-to-reel tape, containing the long-lost radio ads from Cinema Shares' 1977 presentation of GODZILLA vs. GIGAN...GODZILLA ON MONSTER ISLAND! 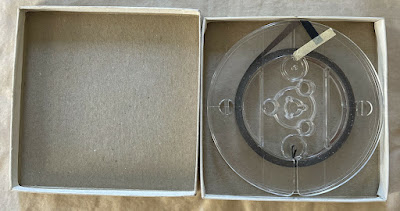 This incredibly rare tape contains one 30-second and one 60-second radio ad.  While it's entirely possible that these ads were also issued on a 45 rpm record, one has certainly never surfaced that I know of.  When the practice of issuing pressbooks slowed to a halt in the mid-to-late 1970's, it took away a valuable resource, because they were the best way to know what items were produced to promote a film.  Over the decades, ads were more often issued on vinyl, at all speeds and sizes of disc, so if one exists, I still have hopes that someone will come forward and share it...and here's why...... 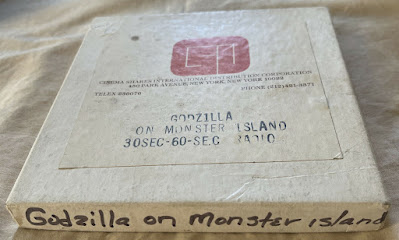 Unfortunately, it turns out that this tape had degraded over the years.  While the 30-second ad is extremely listenable, the 60-second one was really garbled, with lots of artifacting between the two channels, and not even staying in sync.  My excitement was instantly deflated as soon as I heard it.  Upon further study, I realized the recording was of course mono, so it didn't matter if I separated the channels.  Getting down to just the right channel was an immediately improvement, and I realized that lots of the missing bits from that minute-long ad were found on the left channel, and had to be re-assembled like an unholy jigsaw puzzle.  Several hours later, I again had an intact, nearly-complete ad (which, if you are wondering, again comes out of both speakers).  While I can't do anything about some of the occasional interference from tape damage (think "Whole Lotta Love"), it's really a large improvement, although it's far from perfect.  Now, it's basically gone from a "garbled mess" to "being slightly in between FM radio stations." 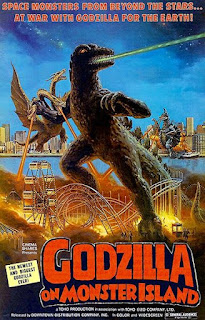 Due to the extreme rarity of this tape, I had already planned to share it on YouTube simultaneously.  Because of the issues with the second ad, it made more sense to add titles to the video, so that everyone can follow along, since it may be the only way we are ever going to hear what this ad sounded like. The video is below, as well as the download link which includes it AND the audio files! Enjoy!
LINK: Godzilla on Monster Island Radio Spots
Posted by Sampoerna Quatrain at 15:16

That's really cool! Thanks for saving this as best as you could.