GODZILLA Vintage Radio Spots: Well, How Many Are There? PART TWO

We aren't going to let any grass grow in getting this masterpost completed.  After all, too much can happen! With my luck, a meteorite with my name on it could come through the ceiling at any moment, so let's act fast.

6) WAR OF THE GARGANTUAS & MONSTER ZERO (UPA/Donald Velde) Two ads (60 and 30 seconds) adorn this 7-inch 45 rpm disc released by Henry Saperstein's UPA.  You can see here a turning point beginning, because in past years there would've been more ads made.  The pressbook (seen here) gives a cursory single line and says you can "order [them] free."  Strangely, I have the shorter spot, and only half of the longer one for some reason.  I think maybe it was a preview from when a copy was for sale, and the seller didn't want to give the whole farm away, I can't remember for sure. In either case, here they are: 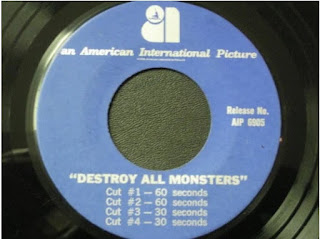 7) DESTROY ALL MONSTERS (American International) Here, we get really lucky, because all four of these glorious ads were included on the awesome Tokyo Shock Blu-Ray...that was immediately withdrawn because Toho had a hissy fit.  This is also a 7-inch, 45 rpm disc, whose existence the pressbook (seen here) very briefly mentions, saying ads were "FREE in 60 and 30 second segments."  Also, this is the place to say that you probably recognize the mighty voice in these recordings.  It's none other than William Woodson, narrator of years and years of SUPERFRIENDS, as well as the great BATTLE OF THE PLANETS! 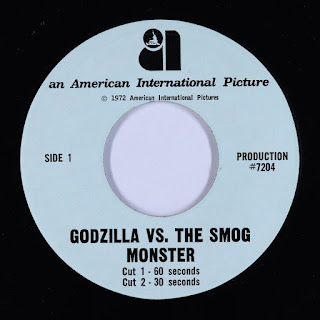 8) GODZILLA vs. THE SMOG MONSTER (American International) Another 7-inch, 45 rpm disc, which for a while was the format for radio spots it seems.  In a reversal of what we've seen, A.I. gives us a verbose, flowery paragraph in the pressbook (they always were good at ballyhoo): "...sound and the fury of the battle sequences and the reactions of the people have been recorded and combined with provocative narration to stimulate the imagination of radio listeners...and they should be used liberally in time slots which cater to the community's youngsters. The spots are 60 and 30 seconds in length and have been combined on one 45 rpm disc for your convenience." Who could argue with that? (By the way, you can see the whole pressbook here!) Only the shorter of the two ads has surfaced over the years:
GODZILLA vs. THE SMOG MONSTER - Radio Spot 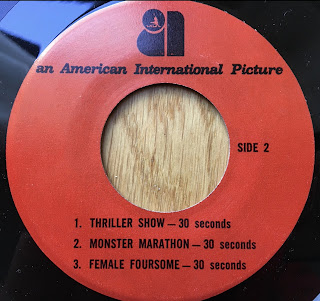 ADDENDUM: Special thanks to Anonymous, who in the Comments section below points us toward an American International repackage of quadruple features (circa early-to-mid 1970's) that not only included SMOG MONSTER (and also GODZILLA vs. THE THING) in their "Monster Marathon," but even had a special radio spot made for the occasion! AI was really good about making double, triple, and even quadruple features out of their films at this time, and often the two mentioned above (and sometimes DESTROY ALL MONSTERS) were included! He was kind enough to include an archive.org link where you can actually hear/download it! See the Comments below! We really should give out No-Prizes around here like Marvel did in the good old days.
9) GODZILLA ON MONSTER ISLAND (Cinema Shares) Here we take a sharp right-hand turn (I told you things would get weird).  There was no pressbook issued for this film (which you probably know was actually GODZILLA vs. GIGAN, and didn't make it to the US until 1977), so we have nothing to go by.  This is yet another item that was first shared on this very blog and exists nowhere else, and it was issued as a 5-inch reel-to-reel tape...only?  It doesn't mean that a 45 doesn't exist, but there is no evidence of one anywhere.  It would be awesome if a vinyl form did surface, because unfortunately one of the ads on my tape was degraded and garbled.  I did my best to reconstruct it--which you can see and download at this post, including a video with subtitles.

10?) GODZILLA vs. MEGALON (Cinema Shares/Donald Velde) And now, the mystery I promised you last time. If I was strictly going in chronological order, this would come before the last entry, as MEGALON was released in the USA in 1976.  Take note of this, because not only was the campaign extremely ambitious for MEGALON, but it was the last Godzilla film issued with a pressbook (which is a very fun read, at this post).  Now, as I said, the promotion for MEGALON was taken to new heights--there was a comic book, four different pinback buttons, the "Godzilla For President" campaign--it went on and on.  There were the usual TV ads, and as you can see above, the pressbook tells us there were "Radio Spots (30 second)." The problem is, they don't seem to be anywhere.  Were they also only issued on reel-to-reel tape, and no longer exist? Did everyone involved throw them away? We may never know.
It ends this list on a downer, but we were going to anyway, because this is the paragraph where I plead to you, if you are owner of any of the material that's missing from these two posts, don't just sit on it, but digitize it and share it with Godzilla fans on YouTube or something.  You own it, it's a mega-rarity, and nobody can take that away from you, but why not make these pieces of Godzilla history available for the generations to come?  If you have nowhere to host it, space at The Sphinx is always available to you.  Did you know that everything we've talked about in the last two posts that has come to light only adds up to a mere twelve minutes of content? This could easily be doubled, and the entirety of Godzilla radio spots could be reunited, and sit together in one archive.  Think about it, won't you? 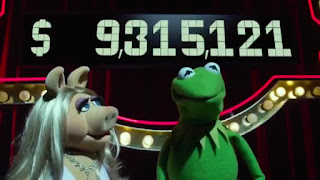 It's starting to sound like a telethon around here, so we better stop now...I hope you've enjoyed this in-depth look at what's mostly a lost part of Godzilla history.  Do you have any of these items for sale? No, you don't.  If you did though, and would rather have money than dumb old records, you could always contact us!*
___________________________
*Worth a try.
Posted by Sampoerna Quatrain at 07:23

Thank you for your service, stuff like your blog makes me excited about Godzilla again! (Cartoons and cg movies can be fun, but just don't cut it, Godzilla-wise.)

@Anonymous: Hey, you're very welcome! Thanks for the comment. You and I are on the same page. My motto is "vintage will never let you down."

Me again, anonymous. There is an quadruple feature with 3 toho kaiju flicks embedded in this file on Archive.org, it's pretty fun too!

@Anonymous: Thanks for alerting me to this! I have seen ad slicks for the "Monster Marathon" portion, but certainly NEVER had any idea there was a radio spot! I will add this info to the posts soon as I can. Thanks again!