Engrish of the Week - Levenge of the Sith

I know, that wasn't very nice, but you will see why I am a little bummed out...do you ever find Asian-made bootlegs at your local thrift store? If you live in Chicago, or Seattle, or in California, you probably do....but in the American South? Really? Most people where I live can't even spell Asia...the ones that can think it's an American Idol contestant.
A better question is, why would I buy another copy of this awful movie? Well, I have to admit, I bought it hoping it was the famous "Backstroke of the West." If you don't know what that is, it is a bootleg of Episode III that was out at the time of the film's release, where the subtitles where a literal translation of the Chinese, back to English, so we got things like this: 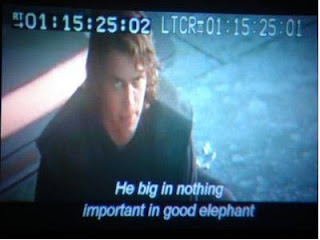 If you haven't seen this, or at least know about it, you probably don't have an Internet connection, so you should stop reading this now, because you are defying the laws of good sense.
If you have, then you know this is the best way to watch Episode III, hands down.
I tell you all that because, I was hoping that was what this was...I wanted to own an "original," but alas, it wasn't to be....turns out, I was fooled by the very thing I am about to celebrate: a steaming pile of twisted Engrish! Yes, I saw "English" listed in the subtitles, and bought it...luckily, we can get some entertainment value out of it. (By the way, it's a substandard print that is letterboxed INSIDE OF the 4:3 ratio, so it's tiny, and the only subtitles are Chinese! Oh, and also by the way, I scanned the UPC code, and got a photo of some foreign classical-music CD's, hmmm!!)
Let's start with the summary on the back of the box, shall we? 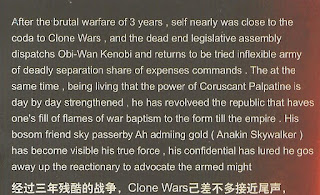 Hm, I want to buy a film...I've heard a lot about this "Star Wars" thingy; let's see what it's about.........after reading this, I still do not know.
I sort of wish this was the plot of the actual film.  It would be more interesting to see a zombie-like "dead and legislative assembly" than discussions about banking clans, and the "inflexible army of deadly separation" would have to be way cooler than bumbling, comic-relief Battle Droids.  Also, the idea of "Coruscant Palpatine" is exciting to me for some reason, I am picturing a Unicron-like, planet-sized Emperor...revolvee-ing.  I even think the name "Anakin Skywalker" pales in comparison to "Sky Passerby Ad Admiing Gold," although I guess that wouldn't fit on action figure packaging very well. And what does this "bosom friend" [snicker] want? Why, to advocate the armed might, of course.  Already we are way ahead of Lucas...Disney might want to consider running some English through Babelfish, and then back again, for Episode VII.  "Instant script!"

Moving on, we then stop to read the part that most of us skip...we already know what movie we are buying, right? Who reads this stuff, anyway? Stupid Americans, that's who. Imagine my shock to see it wasn't Samuel Jackson, but Morgan Freeman in this movie...you see, already we have gone and improved it again! That would be amazing!
Yes, the bootleggers just cut-and-pasted some details from another film, and slapped it on here...nobody's going to notice.  "Look mom! It's NOT RATED!"

And here we are, at the part that fooled me into hoping there were English subtitles, and that they would be hilarious...of course, if my reading skills were better, I would have noticed the 99 minute running time....and probably the 1958 release date.  Yes, I read the back of a Chinese bootleg DVD to see what the content was, and made my purchasing decision based on what it said.  Unbelievable.  Oops!

At this point, the bootleggers have given up caring, and are just hitting the keyboard with their feet, you know, for fun.  Any semblance between this and actual language is unintentional...

The best is truly last...this is the "finer" print at the bottom of the back cover, and it's truly hilarious.  I can't read it without laughing out loud.  In the first line, they butcher the very name of the company they are supposedly talking about by spelling it THREE DIFFERENT WAYS: "Dolby and the doulbe symbo are trademarks of doolby..." I mean, really? That's bad even if you are phoning it in! And the next part is the funniest to me...the "Doolby Labones Licensing Duorpation Bent Chanel Fourlsion Corpration" is going to be my next band name.
Actually, isn't a "Duorpation" a name for somebody that holds two careers at the same time?

The other funny things about this text are that it's one long sentence, even without any punctuation, and that they decide it's important to put a "2002" in there, which is three years before the actual film came out. Oh, and PRINTED IN USA, so there, America...and let's not overlook the pretend FBI logo! Don't copy discs, kids!


So what have we learned from this adventure? Absolutely nothing, and I would do it again.  And probably will.  But wait, there's more! At the very same thrift store, on the very same day, I also actually, literally, and physically bought the following:
Yes, that's right.  Fireworks.  Just let it sink in for a moment.  I know thrift stores that refuse to take PAINT, for the love of Pete, and some genius at this one thought it was okay to put explosives on the shelf.  With gunpowder.   In the toy section.  For $1.50.
And I bought them, of course, and there were eleven left, and they were still in working condition, I am happy to report.  (Or should that be, I am happy to "loud report" !!)
Posted by Sampoerna Quatrain at 13:38

It's no different from the goofiness I see go around in my neck of the woods, and I fall for it as well though I usually just take pictures of it!

I still have the Korean "Oriental" food mart down the street if I feel like wasting money on that stuff too!

You are lucky though! If my Oriental Food Mart had toys and DVD's, I'd be there every week...all mine has is shrimp-flavored potato chips!