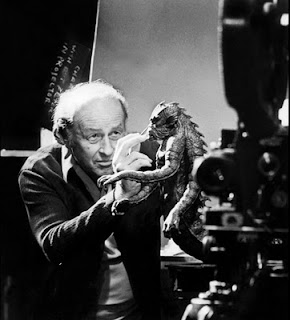 It is with great, great sadness that I report the death of legend Ray Harryhausen.  Not just another light, but a blazing sun, has gone out in the Pantheon of Genius.  My personal gallery of heroes has gotten very slim indeed.
One of my prized possessions is an autographed color photo, that he personalized to me, of him standing in front of a case filled with some of his armatures.  I always agreed with Harryhausen in his statements that no CGI or other type of digital effects matched the reality of movement that stop-motion affords; the heft, the organic-ness, and the natural presence which only a real object can give...these qualities made it the perfect vehicle for fantasy films.
And who could forget the films he gave us? Just to hit the high points is to mention MIGHTY JOE YOUNG (where he worked with his hero, Willis O'Brien), BEAST FROM 20,000 FATHOMS (I have already noted in this blog its connection in the lineage of Godzilla), EARTH vs THE FLYING SAUCERS, the amazing SINBAD movies, JASON AND THE ARGONAUTS, and his swan song, the original and unsurpassable CLASH OF THE TITANS.

I can't imagine a world--no--I don't want to LIVE in a world, that doesn't have JASON AND THE ARGONAUTS. Or THE VALLEY OF GWANGI, for that matter.

God bless Ray Harryhausen.  Thank you for all of your genius that you shared with us during your life.
Posted by Sampoerna Quatrain at 11:51