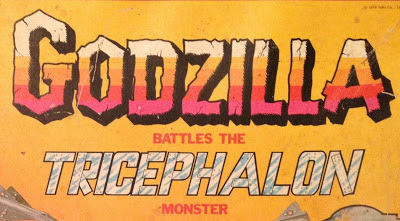 Picking up from where we left off yesterday, let's take a closer look at the many parts that make up this incredible playset.  On the side of the box, we see the contents listed: 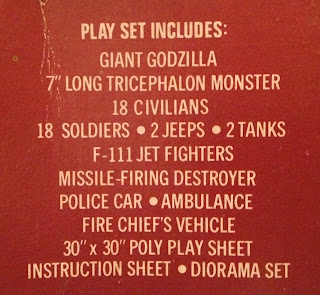 I suppose we could just follow the order they suggest. Let's start with "GIANT GODZILLA"! 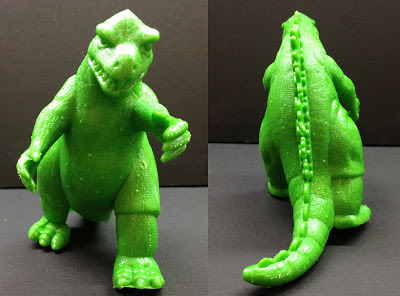 As the star of the set, Godzilla is around 5" tall, and solid, non-posable plastic, with a hollowed-out area in his belly, which is probably for molding purposes, and to keep the figure from being overly heavy.  It isn't visible from any angle,as you can see.  His feet don't stand flat, making his stance a little lopsided, but they captured the lumbering qualities and heaviness of his walk very well. 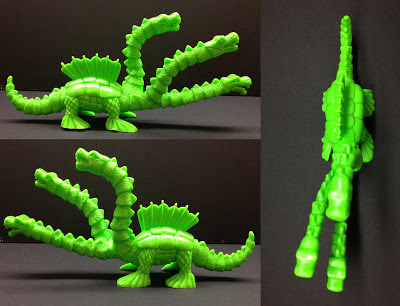 Next we have the other star, the one HG Toys created, the Tricephalon Monster.  He is equal parts fish, turtle, and dinosaur, and I have previously noted his comparison to King Ghidorah.  The artwork (also used for the largest of their puzzles) shows his heads and necks to be metallic, but here they give the impression of being scaly and plated like the rest of his body.  He's 7" long, and is also hollow under his belly. His green hue of plastic is a little different from Godzilla's, which was a nice touch.  There is one case (you can see it on You Tube even) of a Tricephalon monster being found made of red plastic.  At first I thought it had to be a fan-made remold or something, but when I stopped to think about all the variations possible with this sort of thing (especially because the plastic pieces for this playset were manufactured separately, overseas in Hong Kong), then anything is possible. 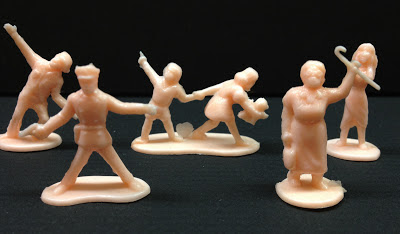 The "Civillians," like the Army men, resemble traditional plastic soldiers from all of our childhoods, but the comparison ends there.  In person, they are both much smaller, an inch or slightly less tall, and made of softer plastic.  There are five different Civillian figures, with six different humans.  On the left we have a splayed-out man in a weird position...he could be a drunk stumbling out of an alley, but he makes a better dead body.  If it wasn't for the base, I would think that's what they intended.  Next we have an old-fashioned cop, who could be straight out of BEAST FROM 20,000 FATHOMS.  The pair of children really shows the level of detail that this playset gives us: the sister, teddy bear in hand, pulls the young boy, who is pointing at the sky in horror! Next is a favorite of anyone who sees the playset, the grandma shaking her cane, looking like a Ruth Buzzi character from LAUGH-IN.  While this is an extraordinary touch, the downside is that, getting three or four of these makes it look like the city is populated by bag ladies.  Last but not least, the screaming woman is so traditional, but so necessary, that it really adds to the scene...look at her, she can't run at all.  She is completely frozen in fear, with both hands to her head in true monster movie fashion.

There are six different poses of soldiers included.  All of them are completely appropriate for defending the city. My one complaint is, like the bag lady, ending up with three or four of the "Walkie Talkie guy" is a little problematic.

Also included are two jeeps, two tanks, a police car, ambulance (nice touch!), and fire chief car.  Including vehicles was thoughtful, because the playmat has several roads, and the bridge is a prominent part of the playset, after all. 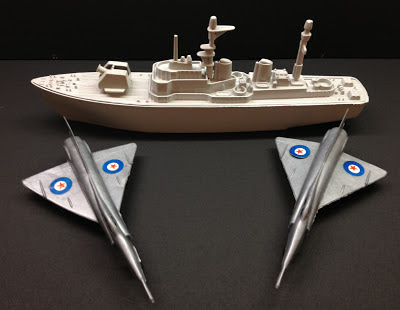 The two "F-111 Jet Fighters" and the "Missile-Firing Destroyer."  While these are awesome, you should have seen the ship when I got it.  The playset had been in somebody's garage for years, and I gave everything a bath and/or cleaning.  Anyhow, why specify "F-111" instead of just "Jet Fighters"? Maybe because it sounds cooler? Looking up the F-111, it was a real thing, known as the "Aardvark," and was brought into use by the U.S. Air Force in 1967. They only built 563, and they were phased out.  As for the Destroyer, I still am not quite sure how it fired missiles--well, I am, because you can see a spring in the instructions.  What I really am not sure of is what the missiles looked like.  There's no clue from the box or instructions.  Maybe you were supposed to supply your own.  Who knows? 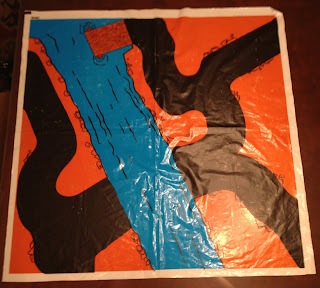 The Playmat is 30" square, and is similar to what used to come with traditional army men, or even Play-Doh, playsets.  It has roads, a dock, and a large river for the Tricephalon to destroy your boat. 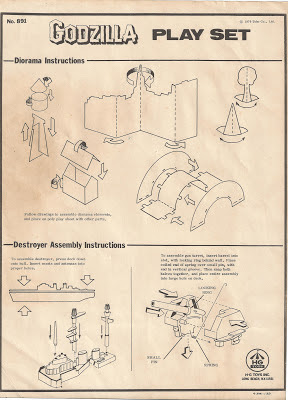 I was really, really lucky to get the instruction sheet included, and it's the first time I've seen one.  It's single-sided, and shows how to set up the cardboard pieces, assemble the boat, and put the spring in the gun turret.
As we wind this thing up, there's one more factoid I wanted to mention, and it ties into the subject of variations I discussed above.  Somewhere, I read there were TWO different background scenes, and I had thought that the large diorama piece was simply two-sided.  Mine isn't, which makes me wonder.  The only place I can find it in writing is the ad (which I've posted before) from an old FAMOUS MONSTERS magazine:
You can see that it says "two different background scenes, one of city docks, one of crumbling skyscrapers!" which almost makes it sound like two separate pieces.  I only bring this up to wonder if this was a later addition, but then again, one of the small photos on the box shows us this: 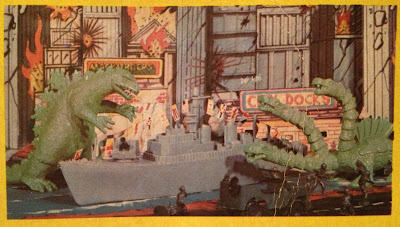 I just haven't seen any photos on the Internets of folks who had two separate pieces, and we can't see the whole thing here, to figure out if it was later produced as a reversible backdrop. If anyone wants to clarify this, or share some info, just let me know.
At any rate, I hope you have enjoyed seeing an up-close look at the many details of this once-in-a-lifetime toy. I hadn't seen any in-depth reviews of this amazing relic, and I thought it really deserved one.
Posted by Sampoerna Quatrain at 08:03

I can't remember where I got that now, but I'm definitely no expert on aircraft. Thanks for the info!

Oh, I got it from the packaging (DUH, I should have looked at my own post.)...leave it to toy manufacturers to get it wrong!

Thanks for posting these great blogs about the "Godzilla vs. the Tricephalon Monster" playset. I had one as a kid and totally loved it. You wouldn't happen to know where I could get another one, would you? (bigalsns@yahoo.com)

I'm glad you enjoyed the posts, Alex! As for finding one, I just set a saved search on Ebay, and checked every day for about probably 4 or 5 years until one finally came up, and then aggressively went for it!
If anybody passing through can help Alex out, email him!