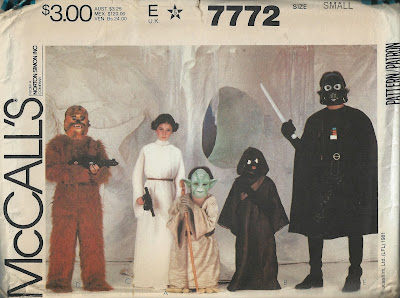 Sometimes, if I am lucky enough to leave a flea market with an item I've found, it is usually the most random, bizarre item that is there...case in point, this unused set of Star Wars costume patterns!
Think back to (or, if you weren't there, just try to understand) a time when most store-bought Halloween costumes were plastic jumpsuits (see my Godzilla Halloween costume post for a nearby example).
But if you wanted something fancier--or just something that looked more like a representation of the character you wanted to be--you had to go to a "fabric store" and buy patterns.  And you had to have somebody who could sew.  I can recall many hours in childhood spent in these stores, because my mom always had to make my costumes for whatever school or church play was going on, which were legion.  It seemed like there was a stupid musical, for one reason or another, every three months. 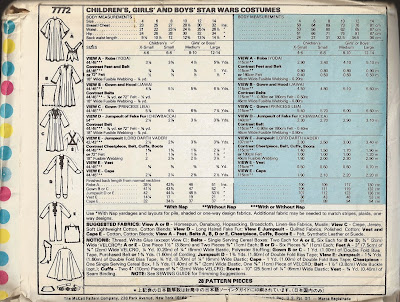 As a Star Wars item, the packaging escapes the controlling "Lucasfilm" standards.  There is no official STAR WARS logo anywhere, and by 1981, we were two movies in.  The white backgound is apparently meant to suggest Hoth, which leads to some other weird thoughts...Jawas on Hoth?
Also, I am confused as to what the user was meant to do for masks, wigs, and props...are the masks pictured just cribbed from Don Post boxed costumes? And if so, why does Darth Vader have huge, Cookie Monster eyes?  And what is the white spike he is holding? Is it supposed to be a lightsaber, or a huge icicle he just broke off from the ice cave behind him? I see that Chewbacca is holding a Kenner rifle, which makes sense...but I feel sorry for the kid in that furry suit...I had a chicken costume made of similar material and it was super hot.  And is the Jawa kid just in blackface, and wearing sunglasses??? Oh, I could go on and on.
Not that we need to over-analyze this, but it's such a strange and bizarre vintage Star Wars item, it was worth a look!
Posted by Sampoerna Quatrain at 07:19

I'm sure my mom would be making those!