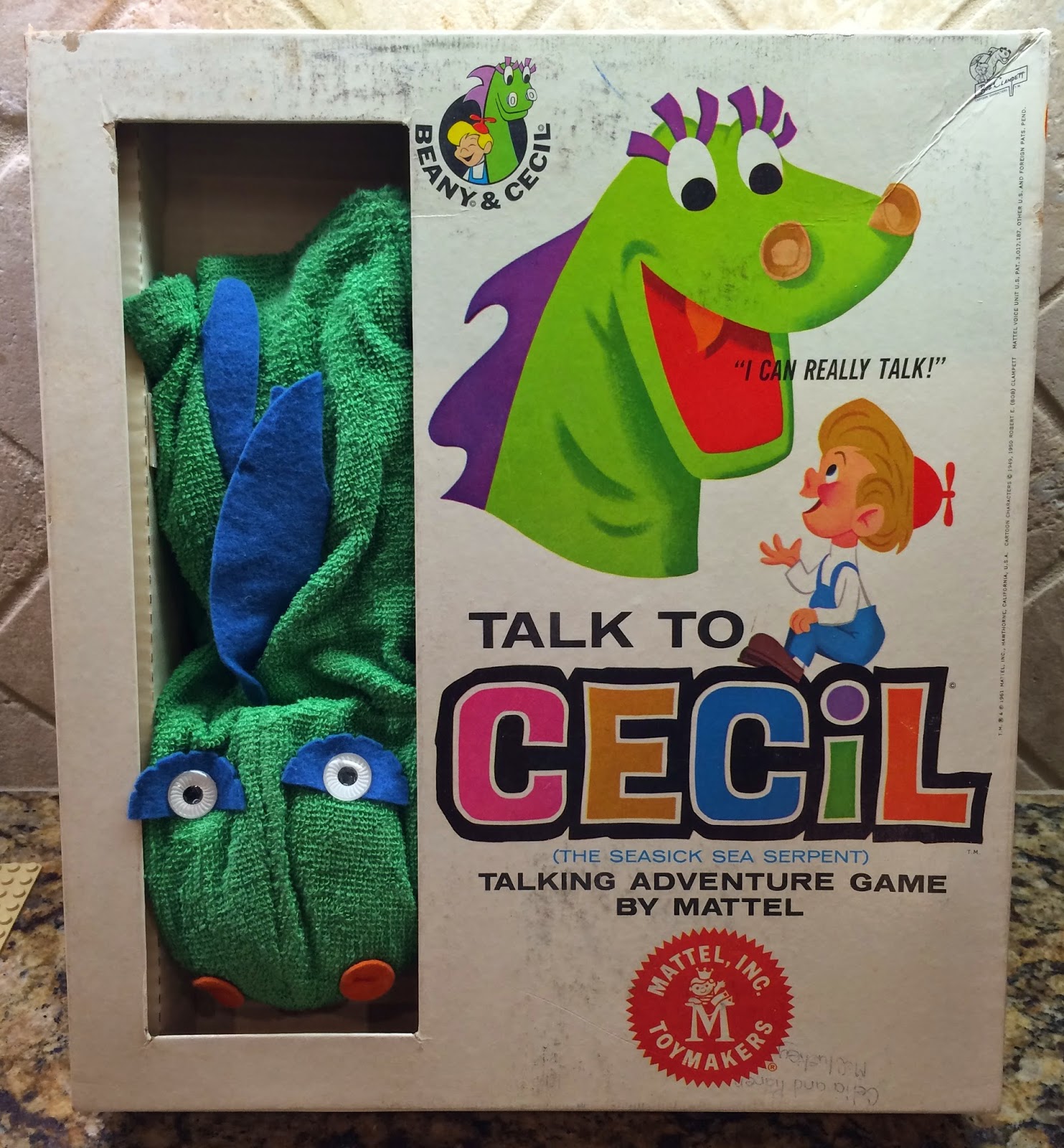 When Bob Clampett's wonderful characters made the jump from TIME FOR BEANY (the black-and-white daily puppet show) to colorful animated TV cartoon show in 1962, the marketing was very well-planned.  Mattel was the main sponsor, and they produced lots of fantastic items for kids to enjoy.
Today, we look at the TALK TO CECIL game.  It was more than just a board game, because it included a talking Cecil puppet!  An in-joke in the cartoon was that Cecil was never completely seen, which preserved his identity as a puppet: the tip of his tail may have been used once, but they avoided it as often as possible, and even his actual length was never clear.  This may have presented problems when it came time to make various plush toys of the Sea-Sick Sea Serpent; after all, stuffed animals have to have a beginning and end...or they won't stay stuffed.  However, retaining the puppet concept worked perfectly for this interactive board game, which was a concept ahead of its time. 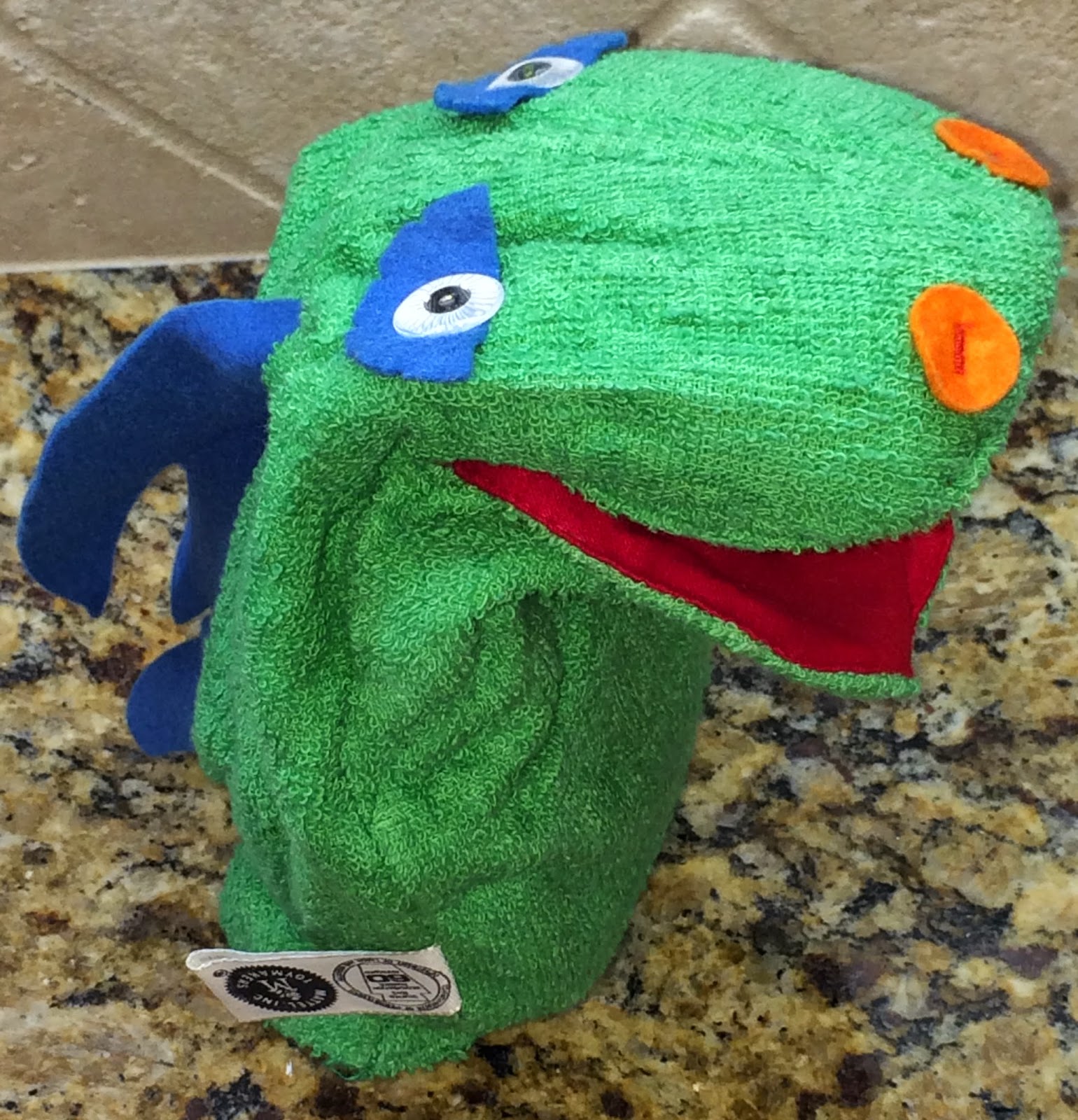 I'm sure the presence of the puppet alone sold copies of this game.  But, the talking toy had an actual purpose in playing the board game! The game play sort of reminds me of the GUESS WHO type of games that are still sold today, because one of Cecil's phrases would correspond to certain character cards, such as "Look for a hat."  That meant the player got to keep that card for points, and meanwhile advance along the game board.
And speaking of the game board, even it was shaped like Cecil, and was somewhat customizable, being designed like a jigsaw puzzle, allowing some variation in play: 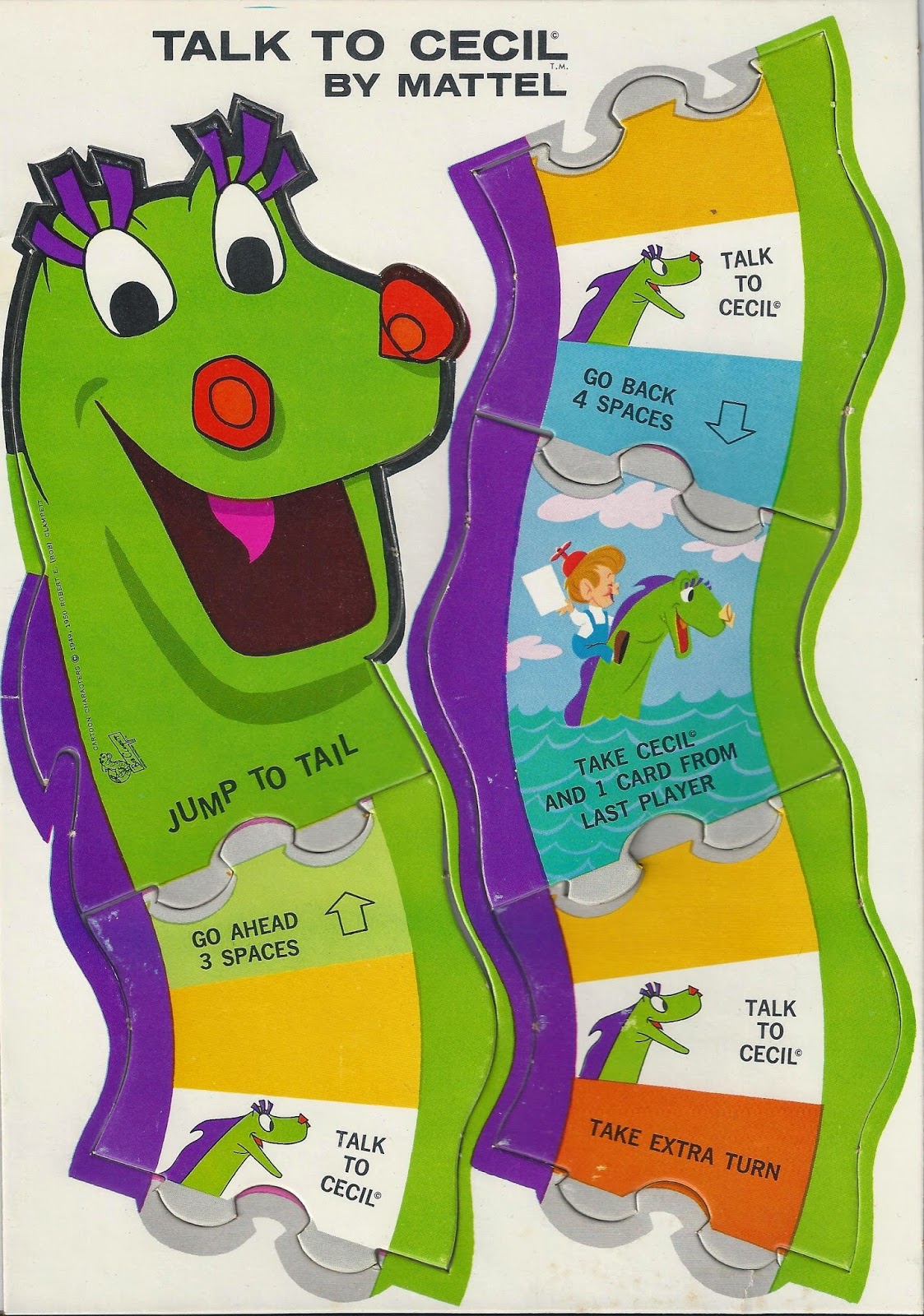 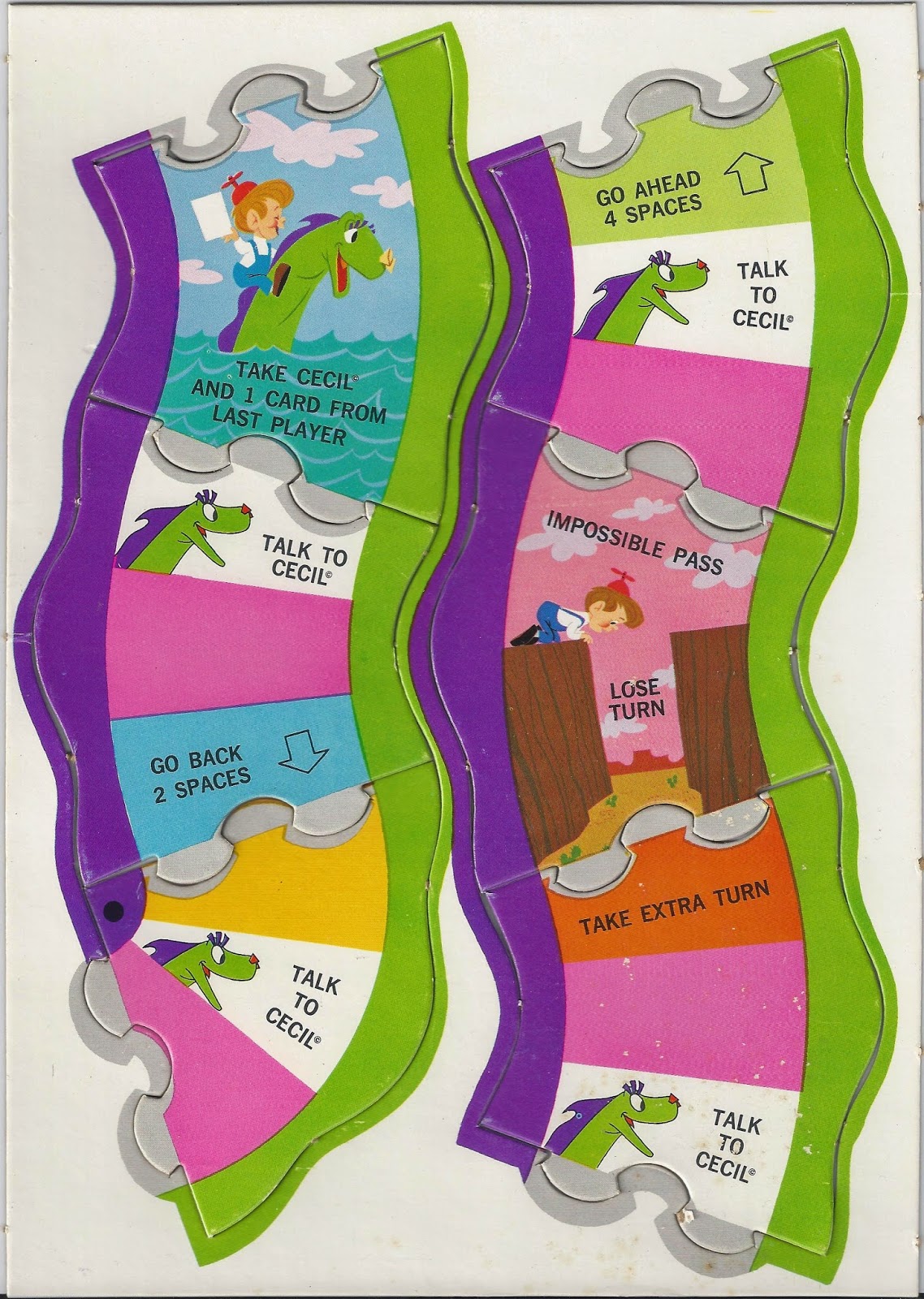 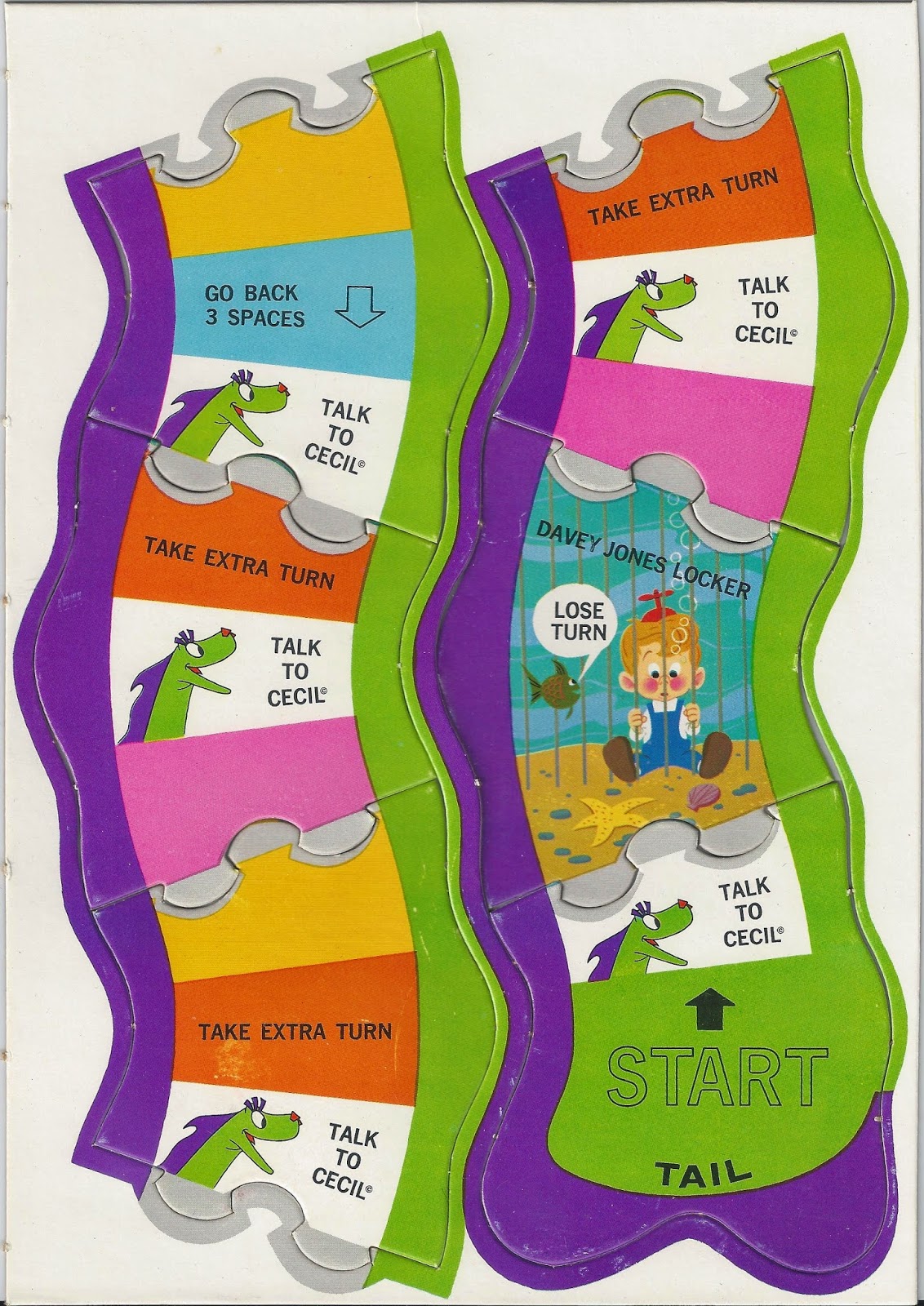 (And here's another example of where Cecil has to have a tail, or the board wouldn't have an end.) Here is a better look at the wonderful artwork for the fifteen character cards: 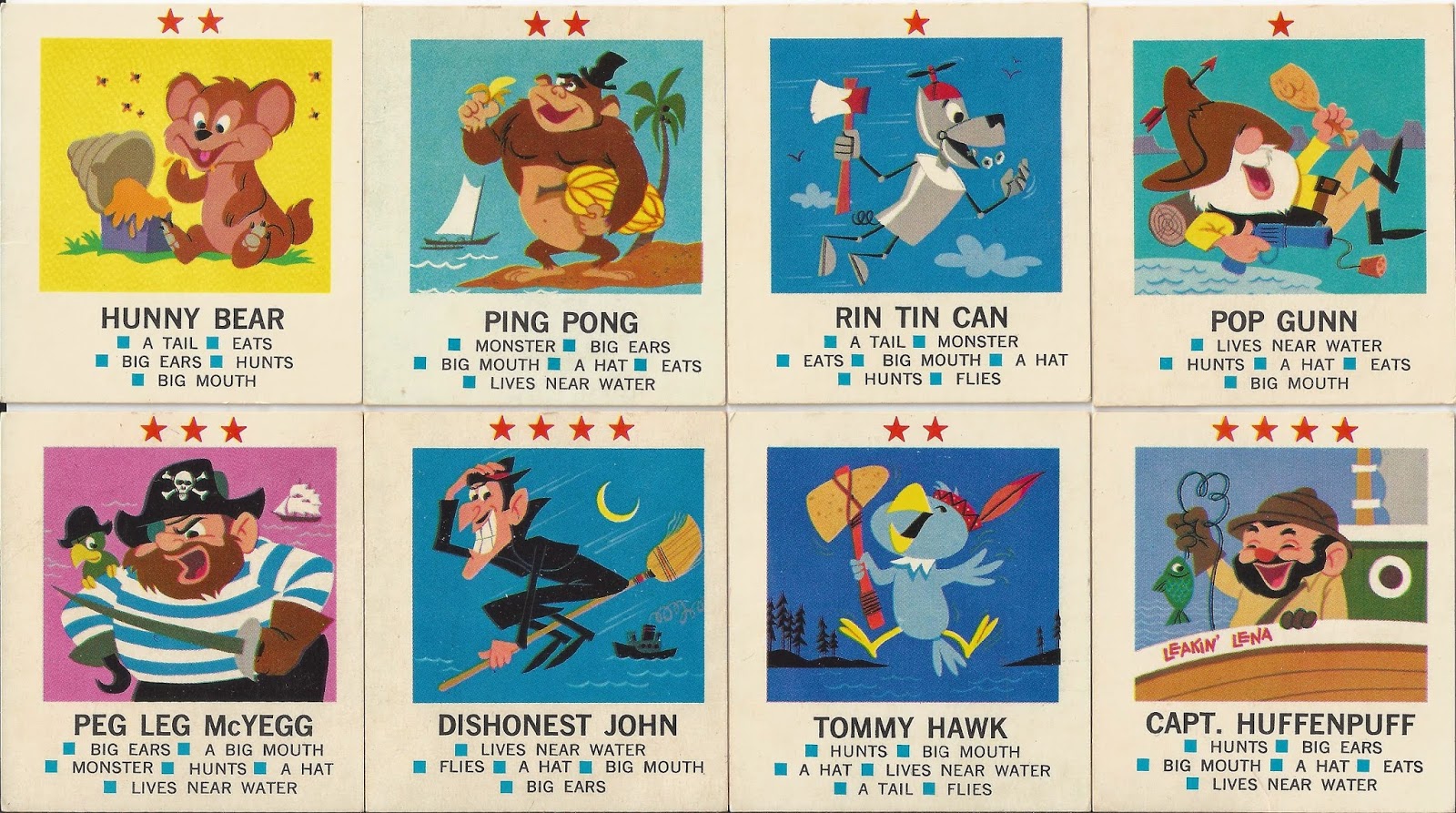 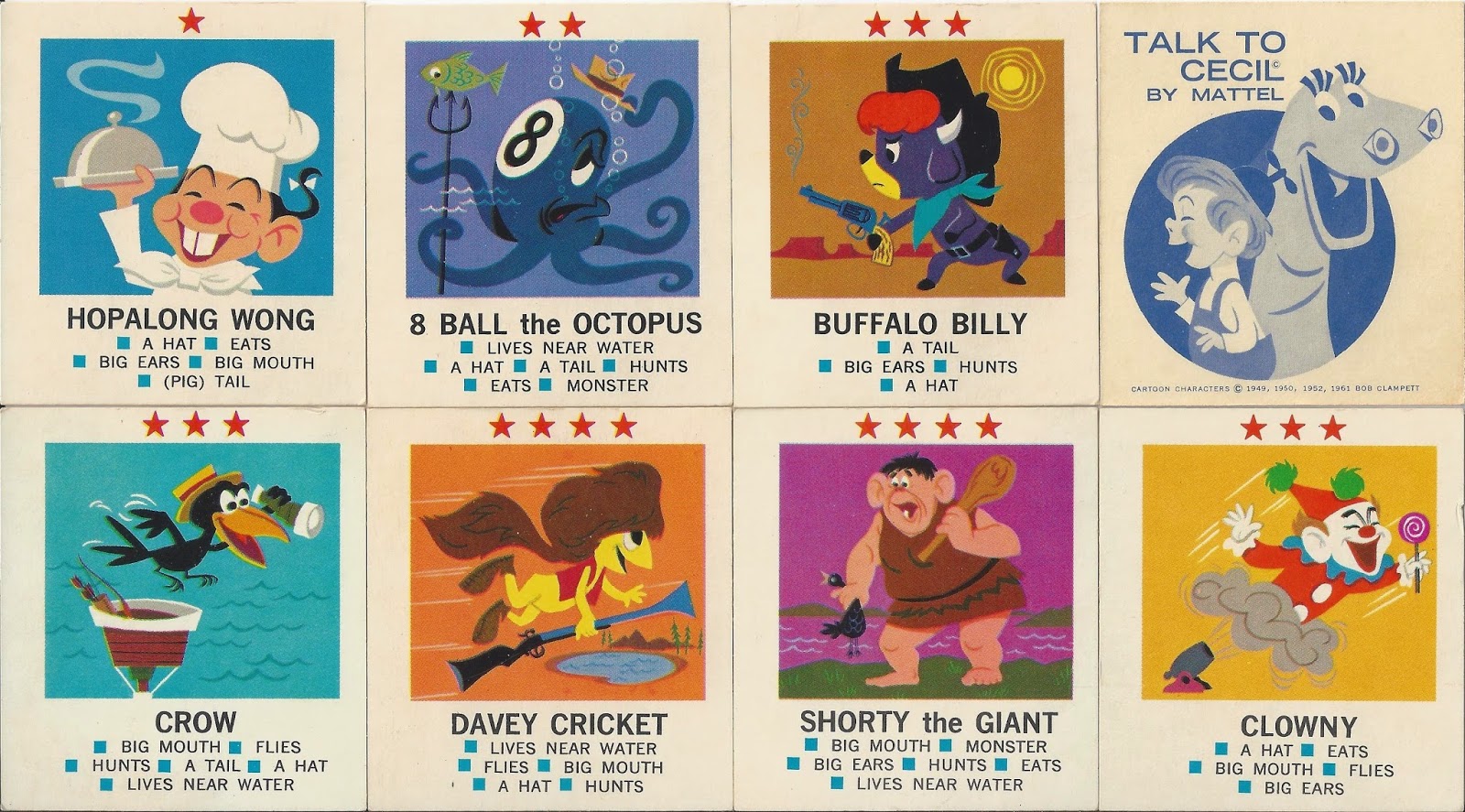 An interesting thing about the items produced for the cartoon is how Clampett kept even his unused characters alive.  Characters like Clowny and Wong appeared frequently in the puppet show, but are barely glimpsed in the cartoon (this may have been wise in the case of Wong...case in point: Mr. Magoo). 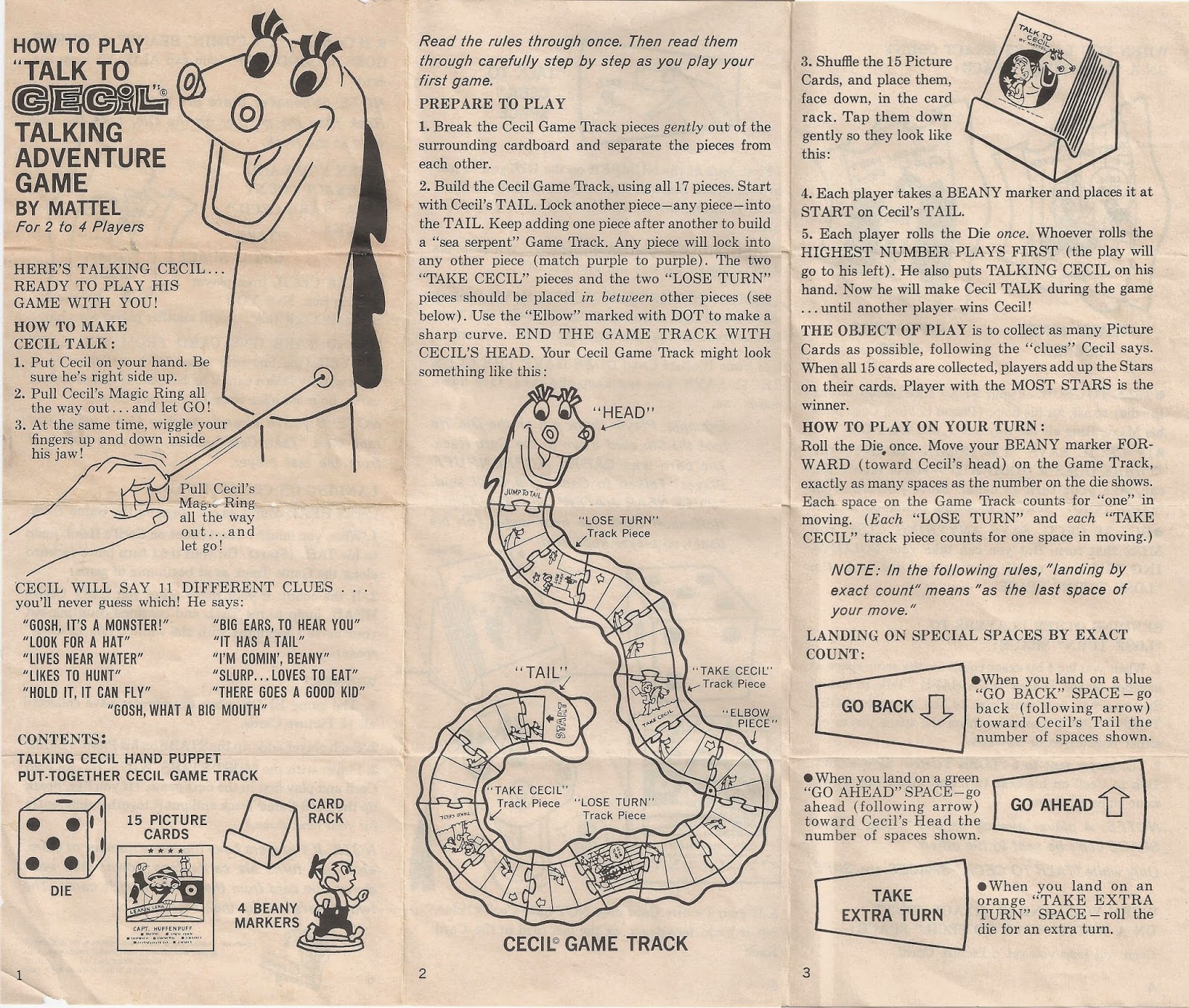 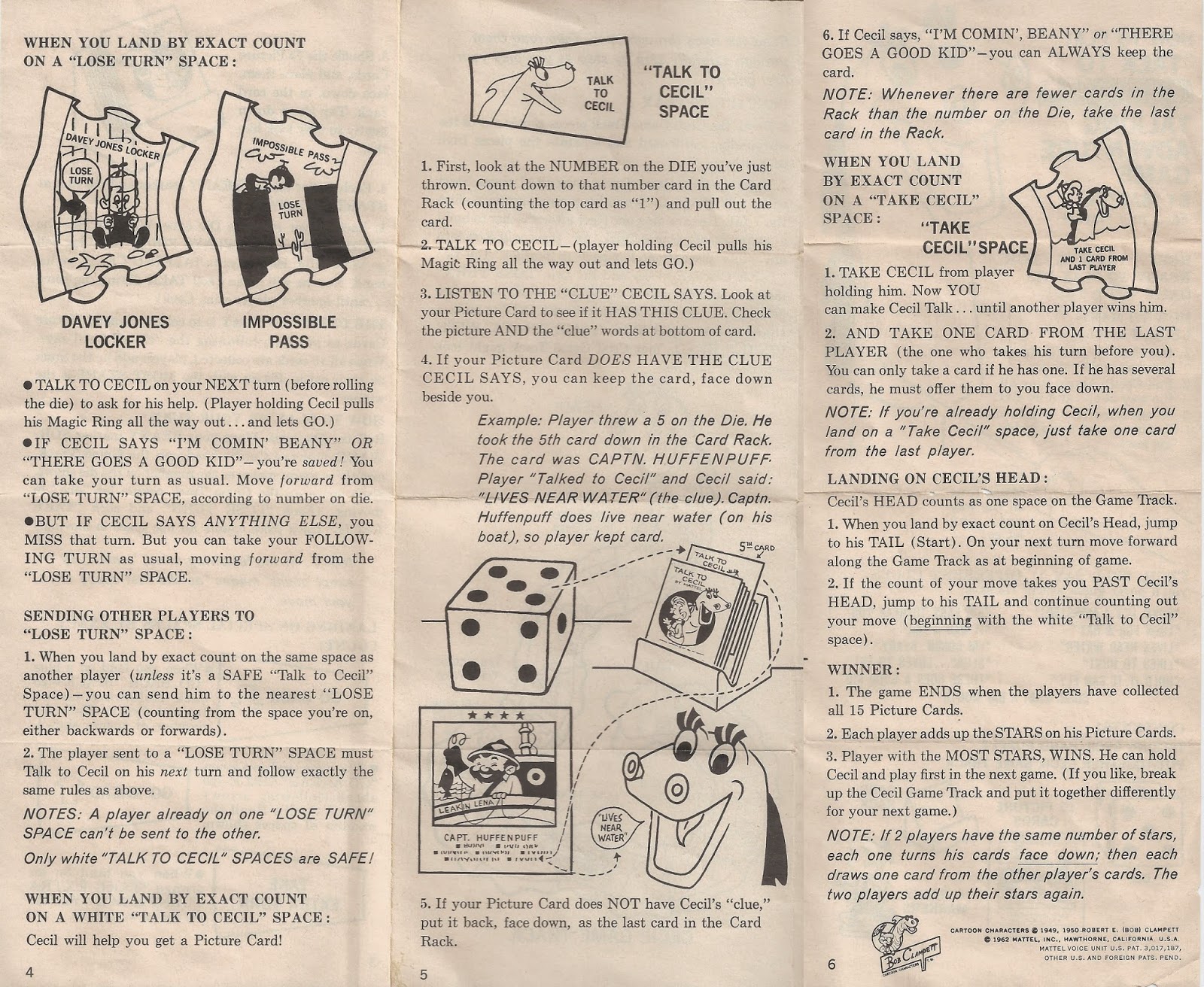 I think that Mattel really succeeded with this game, rather than just selling a puppet, or even just selling a talking puppet.  One note about that, though.  If you have ever seen vintage "talking" items, especially stuffed animals, then you know that the "talk box" could be rather huge, and it definitely is in this case.  It's so bulky, you have to have a very small hand to operate the puppet, but of course the game was made for children, so I can't complain too much.  The pull-string on mine operates perfectly, but when Cecil talks, he sounds like Linda Blair in THE EXORCIST played at a much slower speed, so I decided not to push the issue.  It's possible the spinning mechanism is restricted somehow (if you ever had an old SEE & SAY, you know what I mean), but you don't want to pull his string when you are alone in the dark.
Posted by Sampoerna Quatrain at 07:52

I had that game as a child. I LOVED it. Thank you for the pictures and for the memories. I took the talking Cecil puppet to school in 3rd grade one day. My classmates loved it and when we were lined up to go out for recess, I kept pulling the string and they would laugh at whatever Cecil said. Finally the teacher had had enough and said whoever was doing that to stop. I had already pulled the string. When I let it go, Cecil said, "Shut your big mouth!" The class roared.

My favorite cartoon of all time. LOVED the game. I no longer have the game, but I still have my working Cecil puppet displayed safely in a seat of honor. Every now and then when the grandkids call me to come over to where they are playing I say, "I'm coming Beanie!" just like the way it was always said on TV. Then they always ask, who's Beanie!

That's adorable! I wish that the original cartoons would get a proper home video release. Years ago, there was the "Special Edition, Volume 1" which was incomplete, followed by a harder-to-find "Volume 2," which still didn't give us the rest (I believe there are 78 in all). Both DVD's are very expensive now. I wish Clampett's estate could get them done up right!