And I thought the last title was a mouthful...now, you see, this is what they should've done with the Mecha-King Ghidorah Base:  included a tiny Ghidorah to fight! 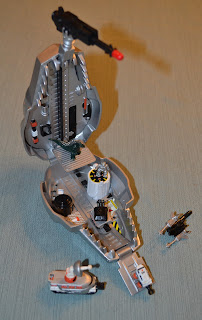 Besides being all silver and shiny, this playset is unique among the other head-shaped ones, because it has a vertical orientation.  It works pretty well in the "play value" department. Besides various heavy weaponry (actually the same missile launcher as in the Mecha-King Ghidorah set), you also get some vehicles, which can be connected together like a train, and a removable radar dish that you can pretend is a Maser cannon. 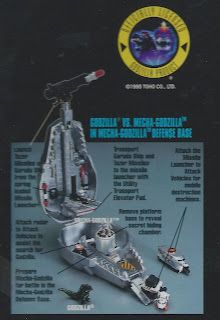 FACTOIDS OF INTEREST:
*No buildings here, but instead you get plenty of action features inside the base, like a working elevator, excuse me, a "Utility Transport Elevator Pad," a folding ramp, and a cylinder that opens to reveal a hiding chamber for Mecha-G.
*The Garuda ship makes a second appearance.
*The Mecha-Godzilla minifigure is unique! This was a nice move by Trendmasters, rather than just rehashing the one from the year before.
*The configuration and weapons can be switched around on the Attack Vehicles, which is a nice touch.
*Just whose base is this, anyway? It looks like Mecha-Godzilla's house, come to think of it.
*When folded, the playset includes the fin on Mecha-Godzilla's head--this is both good and bad, because while it completes the excellent look of the playset, it was also removable, and tended to get lost by careless 90's kids. 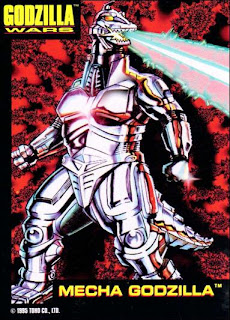 Tomorrow, we conclude our tour of this series, and take a look at the rarest of the line.
Posted by Sampoerna Quatrain at 13:15