Now that we are done with Godzilla-shaped sets, we move on to this playset, the title of which is a mouthful.  It must have been equally confusing to curious fans to see Ghidorah made into a "Mecha-King," and it must have been incredibly confusing to find that he was now a giant base, big enough for Godzilla to fight inside of...I would say "kaiju FANTASTIC VOYAGE," but they already did that in a Gamera movie! 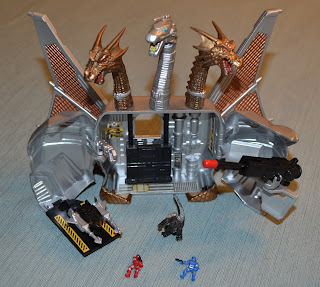 Personally, I think the real mistake here was trying to push the "G-Force" idea...yes, I know in all those 90's movies, there is "G" everything, but in America, for my generation, G-Force is forever connected to BATTLE OF THE PLANETS...heck, even a later re-dub of Gatchaman was called G-FORCE.

Aside from all the confusion, it turns out that a giant base shaped like Mecha-King Ghidorah is pretty awesome.  I think, instead of two tiny (completely out of scale) Power Ranger rip-offs, a Mecha-King Ghidorah minifigure would have made this set perfect, and simultaneously solved the confusion of whether Ghidorah was now a cyborg, or a place to hang out. 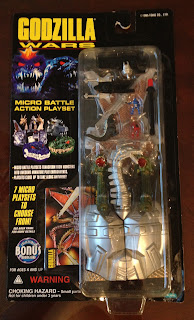 There are plenty of play-features in this playset, and it folds up to make a very impressive-looking model of the kaiju in question. Also, unlike the first series, the backing card has been made generic, so it's the same for all four of the 1995 playsets. 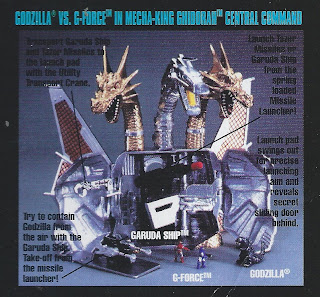 FACTOIDS OF INTEREST:
*Gone are buildings and famous landmarks, but instead, we get a launchable Garuda ship.
*Lots of moving parts, including a large hangar door, a transport crane, ramp for the Garuda ship, and missile launcher.
*The giant wings don't do anything, but folded up, the playset looks really sweet. 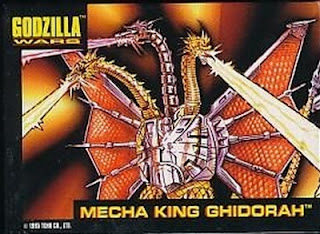 Tomorrow, Godzilla wakes up to find himself in a giant MechaGodzilla head.  Who writes this stuff????!!
Posted by Sampoerna Quatrain at 07:02