Today we cross over into the second series of these awesome playsets, the 1995 batch.  That year, Trendmasters decided to branch out a bit.  Where all of the previous sets had been contained in Godzilla heads, three of the four 1995 sets would be in unique containers modeled after other kaiju, two of which you can see in this photo: 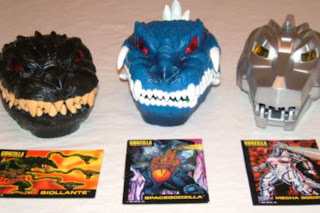 The one holdout, still in the Godzilla shape, was this playset,"Godzilla Battles Biollante in Washington, D.C."  Overall, a pretty gutsy move by the toy company, as GODZILLA vs. BIOLLANTE technically WAS available in English, but not very easy to see.  (Instead of a theatrical release, the film was shown on HBO, and actually did get a VHS release, in widescreen no less, but wasn't widely known at the time.) However, Trendmasters took advantage of two cool things:  1) Biollante is a super-cool giant plant monster, and 2) the lure of destroying Washington, D.C., a la EARTH vs. THE FLYING SAUCERS.

The set is full of pros and cons.  Biollante rises up from a platform (like the elevator in the previous MechaGodzilla set), and actually splits the Pentagon building in half, which is pretty amazing.  The beast is also removable from its "stump," so at least you can take the battle across the Potomac.  Speaking of the water, though, by now the identical water shelf has appeared three times, and it begins to feel a little rehashed.  On the city side of the playset, there are a couple of oddities.  First off, you can flip over the Lincoln Memorial building and put it back, revealing a battery of missile launchers....that's just bizarre.  Secondly, the Federal Reserve Building isn't removable; it just sinks into the earth, and there's a lever to push it back up again.  This never quite works as intended (stomping it into the ground), and it tends to just let go on its own.  Speaking of the lever and all that, the  removable plate (that the buildings rest on) tends to warp, which is one of those things you just have to see; it's not evident in the photo.


But complaints aside, this is a fantastic playset, and worth tracking down.  Look at the backing card:  "The White House is a Favorite Target for Destruction!!" Of course it is!

FACTOIDS OF INTEREST:
*Landmarks include:  The Pentagon building, The Lincoln Memorial, The White House, The Washington Monument, The Capitol Building, and the Federal Reserve Building.
*Movable platform pushes Biollante straight through the Pentagon, splitting it in half!
*Underwater battle action (again)!
*The backing text refers to Biollante having "his" stump, when if I recall correctly, the plant monster was created by combining Godzilla's cells with a scientist's daughter, and it's often referred to as a "her"!
*The F-15 jet makes a return appearance.
*The last playset in the shape of a Godzilla head.
*Like the other Trendmasters Godzilla-shaped playsets, variants were available:  you could also find "Supercharged" Godzilla, which just means the Godzilla head and figure are made in a darker, blackish-green, but otherwise identical. 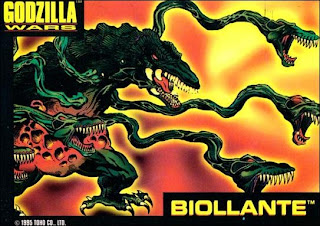 Posted by Sampoerna Quatrain at 07:04