Discovered: Another Alternate in the World of Godzilla Puffy Stickers (1979) 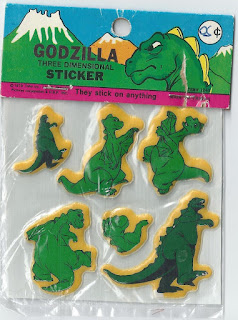 Well, if you care about this sort of stuff, this will interest you--if not, don't worry, I'm going to follow this right up with something more (or less) interesting.  My side-page called VINTAGE AMERICAN GODZILLA attempts to group all American Godzilla items into a somewhat-chronological order, and goes up to (sort of) around the time of the late 80's/early 90's, which needs to be the start of a second page, bringing it up to the present. 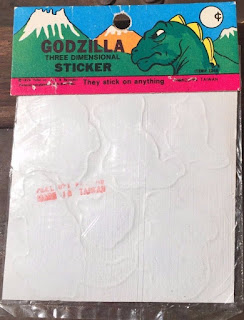 Anyway, there are several variations if Godzilla puffy stickers, all with no manufacturer, which is a bit suspicious.  Then, there is another version with alternate art, 3 different backers, in fact.  Add to this the above item, which I recently acquired.  It is numbered "Item #128," whereas the others like it are numbered "1201."  What this probably means is that one of the two groups were meant for individual sale, and the other, for spinner-racks of various stickers.  From what I have seen, they tended to make separate numbers, even if the size, variety, and art of the stickers were identical.  It all gets confusing, even to see it listed out.
Posted by Sampoerna Quatrain at 08:19