Remembering the Dollar-Store Godzilla Bootlegs of 2006

I used to go into Dollar Stores, and others of their ilk, every now and again, but it's not a habit that stuck with me for very long.  At one time, it was unique to find a large package of soft cookies or strange candy for a dollar, but I don't eat that stuff anymore.  Occasionally, you could find bizarre knock-off toys, or even semi-legitimate ones...or outright bootlegs...and that is where we pick up today. 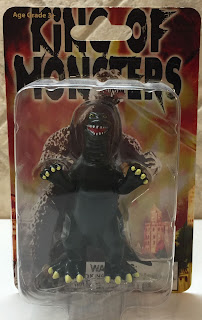 It's hard to believe that already, a decade has passed, but during the Halloween season of 2006, Dollar Stores brought forth a cornucopia of monster-themed bootleg products.  In fact, it was a whole "Creepy Classics" (sometimes) series, claiming to be the "property" of something called "X one X Archive," and distributed by "Greenbriar International."  Their assortment included Godzilla, and also several Universal properties like the Mummy, Wolf Man, Dracula, and King Kong. 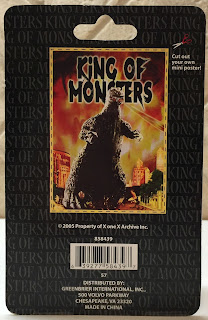 All of the items we will look at today were available for each of the monsters listed.  This first item is a small, hard plastic carded figurine, about 2 to 2&1/2" tall.  It brazenly uses artwork from the 1954 film, and even borrows the title "King of Monsters," although that wouldn't hold for too long.  Also, the word "Toho" is nowhere to be found on the toy or its packaging.

At first glance, it looks kind of neat.  But, prepare for disappointment: 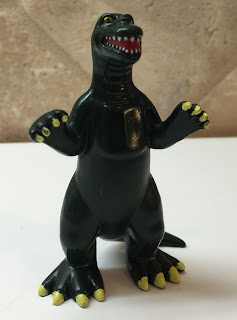 Besides being dark green, and having yellow claws, it's not terrible, right? Look closer.  The nostrils are pinched and in a weird position, and when you turn the figure over, it gets even worse: 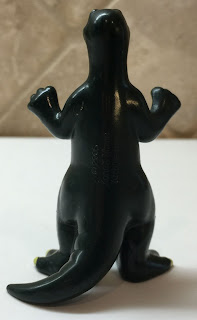 Yep.  No plates.  No anything, except for fine print.  He's Ken doll-smooth.  They totally phoned it in.  Looks fine in the package from a front view, but in reality, it's just a goofy dinosaur.  Let's move on... 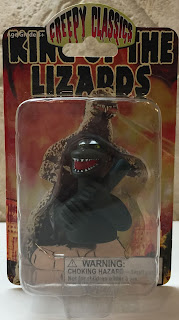 Another item in this line were a sort of finger puppet, and all of them were holding baseball bats.  I guess the idea was that they should fit over small thumbs, and then you could have a battle.  What's interesting to me is that now the "Creepy Classics" banner is appearing, and our title has been changed to "King of the Lizards," as if somebody figured out they were being a bit too loose with their title-stealing. 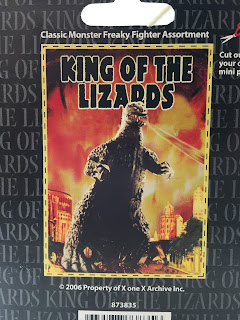 The back of the card is similar to the last item, with the change of title.  Incidentally, there was one other item offered in this series that I didn't photograph, and that was posters of all the card artwork for each of the monsters.  In Godzilla's case, his poster looked exactly like this "King of the Lizards" card, just much bigger.  They came shrink-wrapped to a large sheet of cardboard.
King of the Lizards? I thought that was Jim Morrison! 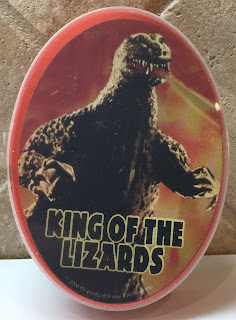 Lastly, what good is a series of bootlegs without a deck of playing cards? Easy and cheap to produce, after all.  And, let's make them oval-shaped, so they can be completely useless.

I hope you've enjoyed our quick look at the bootlegs of a decade ago.  Hopefully, Toho found out about all of this, and gave this company a sound spanking.  Between Toho and Universal, I think we can figure out what happened to them, and whether they are still around!
Posted by Sampoerna Quatrain at 08:11

King of the Lizards? I prefer to call him Mr. Gojira Risin'.
Did you hear about the Godzilla Reebok shoes coming out in Japan, on July 29th?
http://p-bandai.jp/megatreshop/special-1000006144/

Ha! Yes, those Reeboks are awesome...I take it the second pair glows in the dark??

Yes, they do glow in the dark! It's also nice to see that they used Godzilla Junior's tanned hide to make the shoe. Personally, I'd like to see a King Ghidora fedorah.

Greenbriar International is basically a subsidiary of Dollar Tree itself (from what I was told). Most everything sold at Dollar Tree (and similar outlets) are from this company. It really makes sense once you start noticing the pattern.

Ok, yes! It is starting to make sense now!
What doesn't make sense was watching people shop there, cramming carts full of $1 worth of toothpaste in small tubes, or packages of Chinese batteries that wouldn't last 10 minutes....nobody is really SAVING any money that way!

I'm ashamed to admit I go there as well for cheap earphones that last a couple weeks, Speed Stick (one of the few legit brands they get in) and nasal spray. Of course they brought this on ourselves. I feel none of this would've happened if Woolworth was still around.

I remember seeing these One X One Archives Creepy Classics sets at my local Dollar Tree store in 2006. I don't think I ever saw the posters except at the flea market. I have two (Boris Karloff's The Mummy & Bela Lugosi's Dracula). I wish I had the rest of the series, including Godzilla.

Thanks for sharing & posting these pictures of the Godzilla items.

here's a picture of my king of the lizards and king kong posters. I can't believe i've had them for 14 years now, so glad i kept them.

@Anthony OnFire: thanks for sharing! You did good to keep them...I have seen the King of the Lizards one go for high prices on Ebay. However, there are none on there at the moment!