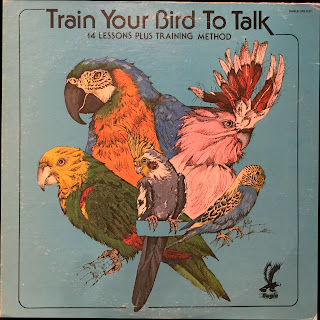 Before you ask, yes, yes this is a real thing.  I'm not even going to make fun of it.  Well, okay, I bought it because it seemed hilarious, so there.  But what I can't do is tell you whether it works or not.  If you own a bird, you have a huge benefit over people that purchased this album originally:  you have the technology (to quote the opening of THE SIX MILLION DOLLAR MAN), and by that I mean, you can use the digital version of this album, set your device to replay it infinitely, and probably end up with a bird that says "HI, BABY" a thousand times in a row.  (Seriously, how 70's is that. I am surprised there's not a track for "What's your sign?")  There, I said I wasn't going to make fun of it, and now I'm getting off track.  Here is the back cover: 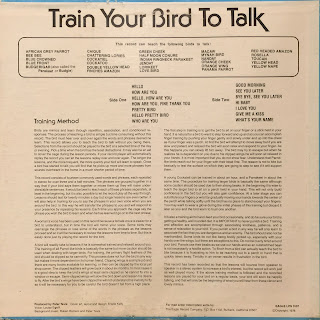 There's a helpful and serious article about bird-owning there, as well as a list of birds that talk, some of them I've never even heard of.  Here's a closer look at the tracks included: 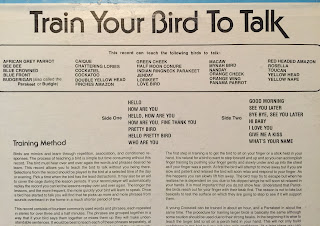 They are nice enough to tell you that it's a female voice doing the talking, and it appears that she's not looped, from what I listened to.  Oh, and I should tell you about the music!  When you first start the record, you think you are in for an acoustic-prog experience, because that's what happens, but it fades down to nearly nothing when the woman's voice starts talking, staying on the very edge of audibility, until the end.  I was surprised at this, because I've read that birds will imitate most anything if they hear it enough (birds in pool halls make "racking and breaking" billiard sounds; my mother had a parakeet that would beep out the alarm-setting keypad noises)...so why would you include a bit of music on a record that solely exists for birds to learn from?

I miss those days of pointless bird singing/talking training records! We lived in such an enlightened time back then!

Me too! That is exactly what I was trying to convey!

Hey, amazing! Can you please do a repost? <3