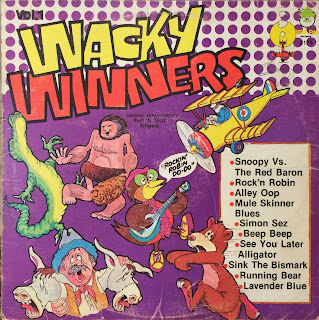 Usually, these sorts of random "kid's albums" bring back lots of memories for people.  This isn't one that I owned as a child, but maybe you did.  Hopefully, you did, but if you didn't, that's okay too, because honestly, it fails as being much of a children's record.
First of all, there is this: 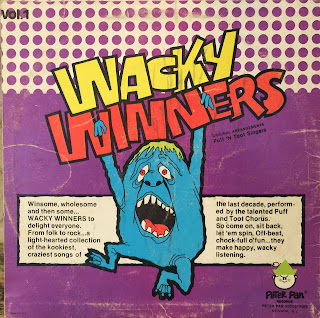 This horrible blue monstrosity has absolutely nothing to do with what is going on here, and I would bet money that it kept several children from begging for this LP.  It's frightening, but yet, hard to stop looking at.  It's sort of a demonic eggplant/M.O.D.O.K./California Raisin-reject type thing.  Let's move on, and quickly.
I'd like to point out:  at some point, it became a "thing" to assign songs from the 1950's and 1960's to the category of "children's music."  I'm not exactly sure when it happened.  Perhaps the people that grew up with some of those songs felt they were silly.  Perhaps the publishers of those songs felt it was a way to keep them alive (and licensed).  At any rate, it happened, and I'm sure it continues to happen to this day.  Sometimes it makes perfect sense, and sometimes not at all.  Case in point:  this album.

Many of us have fond memories of the scores of Peter Pan (and Power) Records that used to be everywhere, especially if they involved book-and-record/comic sets, and superhero stories.  Those were exciting and fun.  This record is neither of those things.  Instead, you get weak remakes by different singers, with different instrumentation, recorded in different studios, but somehow, all called the "Puff 'N Toot Singers."  My friends, if you slog through years of school, only to find yourself in something named the "Puff 'N Toot Singers," then your life has been severely wasted.  The name is so bad, the copy-writer can't even remember it by the time he gets to the back cover, where he calls them "The Puff and Toot Chorus."
The front cover is supposed to illustrate the "happy, wacky" songs found inside, and yet there is still weirdness.  Let's go in order.  The Royal Guardsmen's 1966 hit probably makes sense on a record like this, but look at the illustration on the front cover: 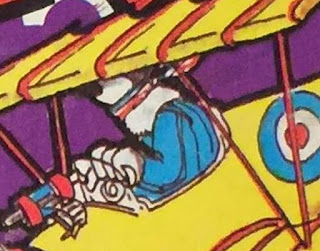 I'm not exactly sure what is going on here...without a doubt, we are trying to publish a cover of a song about Snoopy, and yet not use his likeness.  It's almost a blob with a nose...and a bandana tied around its...blob.  I think those are paws behind the windshield?!  The more I look at this picture, the more I think my answer hinges on getting my medication changed.
Next up is "Rockin' Robin," which the cover misspells (again, 1950's). The colorful, Kroft-nightmare bird character on the front sings... 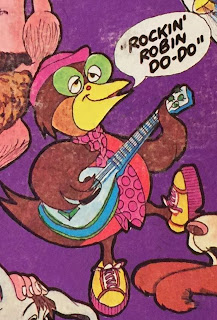 ...about a Do-do. Huh.  Well, let's just keep going, shall we?
Next up is "Alley Oop," a song about a caveman based on a comic strip, so again, that one makes sense (although it's not "from the last decade" as the cover says; according to Wikipedia it was written in 1957).
The next song listed is "Mule Skinner Blues," depicted by this creepy abomination: 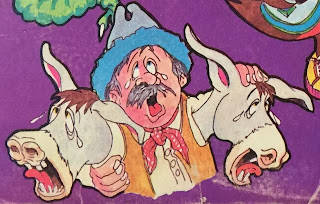 Which looks like a Gepetto-monster with donkey's heads for arms.  However, the song isn't even on this album.  Instead we get something the label calls "Wringle Wrangle."  According to discogs.com, it was sung by Fess Parker in the film WESTWARD HO THE WAGONS (Or, if you went to private school, WESTWARD WHORE THE WAGONS).  So there's that.  At any rate, it's boring, choppy, and I wouldn't think it would hold a child's attention for very long.
Closing out Side One is "Simon Says," or "Sez" if you read the front cover.  This song doesn't end, or fade out, but just cuts off, and that's exactly the way it is on my record.  Mastering error? Nice going, Peter Pan.  Stick to peanut butter.

Side Two begins with a hideous song called "Beep Beep." I was ready to swear that it was mis-titled, but it turns out, that is indeed the name of the novelty song released by The Playmates in 1958 (again, the 1950's).  It speeds up as it goes, and makes you want to slam your head repeatedly in a filing drawer.  After that is the Bill Haley classic, "See You Later, Alligator," where, once again, "1950's=Kids' Record."  Hey! 1950's again...I'm starting to wonder if this album is mis-dated.  Nah, it's just Peter Pan.

"Sink the Bismark [sic]" was a hit for Johnny Horton in 1960, and I defy you to find a child alive today who will sit through it.
Side Two concludes with a pair of real winners.  First up is "Running Bear," which the front cover illustrates with... 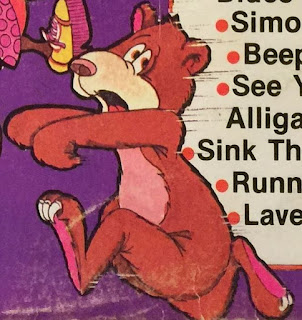 A bear.  Running.  In reality, the song is about an "Indian brave" whose love interest is on the opposite side of a turbulent river.  They both get in the raging river, swim towards each other, and die an agonizing death by drowning.  If that's not a children's song, I don't know what is!

And lastly, the perennial elementary school classic, "Lavender Blue."  As if that wasn't bad enough, this version is a sloppy, Muzaky, saxophone-drenched version, that sort of sounds like a love ballad from one of those later Rankin-Bass stop motion stories; the ones where they had run out of ideas.
Play this for your child, the next time they have done something wrong.

Oh, and lavender is purple, last time I checked.

LINK (if you dare):  WACKY WINNERS, VOL. 1 (and apparently there are at least TWO MORE volumes in this "series," if you can believe it!)
Posted by Sampoerna Quatrain at 14:14

Thanks, I'll have a fun time being bored out of my mind listening to this!

That "Snoopy" looks more like a polar bear to me!

While listening to this monstrosity mix, even though they claim "The Puff and Toot Chorus" sang these tunes, I can tell "Alley-Oop" is it's original recording by The Hollywood Argyles. Here's this link for comparison...
https://www.youtube.com/watch?v=-KqQRcKq14c

I guess Peter Pan Industries didn't bother to credit whatever music company they might've licensed that track from.

Years later, they would release budget CD's under the "Compose" label of a lot of oldies music including "Alley-Oop" I would buy for my first CD player!
http://www.allmusic.com/album/70-ounces-of-gold-golden-hits-vol-2-mw0000262132
https://www.amazon.com/70-Pure-Gold-Various-Artists/dp/B000003LCN

Sorta wonder if Wringle Wrangle was a last-minute edition if they couldn't find a copy of Mule Skinner Blues to use for the effort, of course the way the cover was designed, I suppose that was done first before they could secure the tracks necessary for this. Even if they did use Mule Skinner Blues, I wonder what the odds are it would've been the same arrangement as Alley Oop? Merely license a track from another company without mentioning any of it on the cover/label? At the time, that tune (best performed by The Fendermen) was owned by K-Tel International. You can even check out the tune (even Alley-Oop) right on their site!
http://www.ktel.com/dominion_search.php

There, I completely bored you with this info!

No, it's all interesting! I never even considered "Alley Oop" was the original track!
I remember those Compose discs. I remember buying one at K-Mart and realizing some songs were remakes!

This may go without saying, but is there a connection, on some level, between Peter Pan/Power Records and K-Tel?

No, it's all interesting!


I never even considered "Alley Oop" was the original track!

Having listen to it constantly, it was pretty spot-on. Some of those other tracks could be previously released material Peter Pan had going back a couple decades as well given the age some recordings appear. This could be more an odds 'n ends release if any.

I remember those Compose discs. I remember buying one at K-Mart and realizing some songs were remakes!

Yeah, there were plenty of these types in the 80's and 90's that usually claimed to be the Original Artists, yet the recordings ranged from newer renditions to actually using the originals but they end up sounding inferior to what you could probably have heard from a more legit source (MCA, WB, RCA, etc.). There were quite a lot of these outfits with names like Golden Circle, Classic Sounds Ltd., or Post Records.

This may go without saying, but is there a connection, on some level, between Peter Pan/Power Records and K-Tel?

I'm sure there isn't, since Peter Pan was based out of New Jersey while K-Tel originated up in Winnipeg, and they both pretty much catered to different markets (K-Tel of course with their "As Seen on TV" products), aside from the cheaply-pressed LP's of recent pop hits sold at stores everywhere. Of course Peter Pan's parent company would get into selling videos in the 90's like that Regis Philbin workout tape.

I'd say over half this album duplicates the K-Tel smash Goofy Greats -- the exceptions are "sink the Bismark", "Lavender Blue", and "Wringle Wrangle"
Check out the track list:
https://www.discogs.com/Various-Goofy-Greats/release/1607696
or the TV ad:
https://www.youtube.com/watch?v=DyiLOPnENfE

I'm assuming Peter Pan was trying to pick up on the Goofy Greats thing.


OK, I'm reading Super Dictionary Part 13 and you mention that "toot" is late 1970s slang for cocaine. Then if "puff" is a reference to marijuana (everybody knows that's what "Puff the Magic Dragon" was really about, right?). This adds a whole other dimension to the name "Puff 'n' Toot Singers", eh?

It wouldn't surprise me if Peter Pan wanted in on that lucritive discount/drug store market that was quite huge in the 70's thanks to K-Tel's efforts.

I have not read something so funny, and of great writing quality in so long. This is the BEST! I honestly think this could EASILY be converted into a SNL skit where they review "old favorites". It's funny because it's true.

My brother and I had this album as kids, and once again, this is a quality write up! Thank you so much for the laughs!

Thank you for the high praise! I appreciate it very much. It always improves my day to hear from people who are enjoying this blog.