We conclude our in-depth look at Trendmasters mico-playsets with one of the absolute coolest, and by far the absolute rarest. SpaceGodzilla was the newest Godzilla foe at the time (if you were like me, you may have thought GODZILLA WARS was the newest movie in Japan!), and what better location for him to invade than Tokyo? Seems ironic that, while these playsets have focused on American cities, we finally get to Japan. 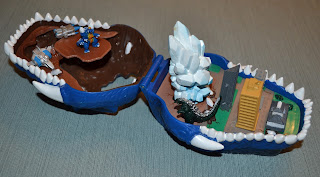 Buildings also make a return, even though we don't get specific ones.  A panel under the playset pushes up, sending "growing" crystals through the ground, displacing the buildings.  The giant crystal in the middle has an empty space that SpaceGodzilla fits tightly inside of, which makes sense because in the movie he traveled to earth in a giant crystal.  When the playset is closed, the giant crystal doubles as the one at the crest of SpaceGodzilla's head, which is pretty clever. 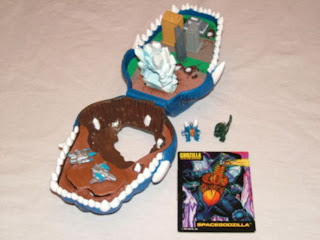 The two halves of MOGUERA in vehicle form are also present, although the "Land Falcon" is not removable.  The "pivoting ground plate" slides over, but more interesting is the "Pit of Doom," which the card points out, "has taken the lives of more than one monster"! In fact, you can see the remains of Mecha-King Ghidorah down there! Score one for play value! 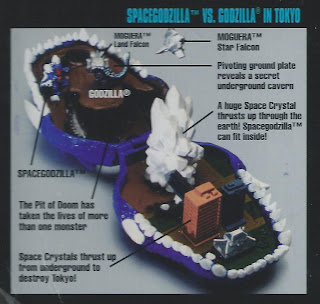 FACTOIDS OF INTEREST:
*The rarest of the rare! I for one never saw this one in an actual store!
*When opened, the rows of SpaceGodzilla's teeth give the appearance of even more jagged crystals surrounding the city!
*Awesome SpaceGodzilla minifigure!
*MOGUERA Star Falcon ship!
*The remains of Mecha-King Ghidorah at the bottom of the Pit of Doom! 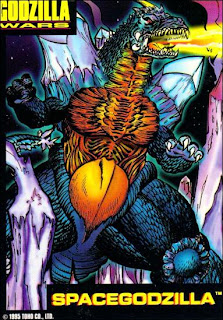 Posted by Sampoerna Quatrain at 08:25

You're a very lucky man to have this one! I've been looking for the SpaceGodzilla playset since *forever*...but no luck...yet!

I generally prefer the city/outdoor ones with buildings to the Mechagodzilla and Mecha-King Ghidorah defense base/command center ones. Pretending to smash an actual city feels a lot more like re-enacting the movies. =D

Thanks for the great reviews!

I got this in a store when I was little! It is still in our toy bin in our basement, pieces scattered amongst any number of boxes filled with toys. I don't think I ever saw the King Ghidorah one in a store.

Could I perhaps buy it off of you?

Could I perhaps purchase it?

Thank you, but it's not for sale!